The Taliban has been seizing territory in Afghanistan at an alarming rate, having captured all or parts of ten provincial capitals from the Afghan National Defense Security Forces (ANDSF) in the past week. Far from representing a reason for President Joe Biden to halt the withdrawal, however, this rapid deterioration in Afghan security has exposed the bankruptcy of U.S. policies for at least the past 15 years – and the stark unwillingness to tell the truth by a generation of senior U.S. leaders.

Since early 2002, the war in Afghanistan never had a chance of succeeding. After President Bush’s initial objectives of disrupting Al-Qaeda and punishing the Taliban were accomplished by March 2002, the mission was changed to a nation-building operation that included objectives that were outright militarily unattainable. Presidents Obama and Trump continued the nation-building focus, guaranteeing the war would never be “won” and thus never end.

The illusion of success could be maintained so long as U.S. and NATO military remained engaged. Now that the military cover is being withdrawn, the ugly and bloody truth is emerging: 20 years’ worth of senior leaders claiming progress, success, and “on the right azimuth” were always fiction.

The Afghan National Security Defense Forces (ANDSF) have proven utterly incapable of defeating the Taliban offensive. On paper, this shouldn’t even be possible.  Consider that the personnel for both the Taliban and the ANDSF are largely drawn from the same Afghan talent pool.

The side being routed right now has an army, on paper, of 300,000 men, been given training by the most powerful military alliance on earth, received hundreds of billions in support, has at least a rudimentary air force, an armored fleet, and the backing of its government.

The Taliban, in contrast, has approximately 75,000 men, no formal backing from any state, no trained army, no air force, no technology, and only what vehicles and weapons they can scrounge on the open market – yet they are dominating their more numerous, better equipped, and better-funded opponents. The reasons the ANDSF has thus far failed, however, are not hard to identify.

For the better part of at least the past 15 years, senior U.S. civilian and uniformed leaders have been publicly telling the American people that the war in Afghanistan was necessary for U.S. security, making progress, and supporting an Afghan security force that was performing well. All of it, from the beginning, was a lie.

In 2010 I wrote an article titled “War on the Brink of Failure” in the Armed Forces Journal that plainly stated upfront, that “absent a major change in the status quo that currently dominates in Afghanistan, the U.S.-led military effort there will fail … and despite our best effort to spin it otherwise, we will lose the war in Afghanistan.”

Two years later, while still an active-duty Army officer and after my second combat deployment to Afghanistan, I wrote a detailed report which revealed that things had gotten much worse.  Senior ranking U.S. military leaders, I revealed, had intentionally deceived the American public.

“Despite overwhelming physical evidence of our failure to succeed on the military front,” I wrote, “senior US and [NATO] leaders inexplicably continue a steady stream of press releases and public statements that imply the exact opposite.” Without a change in strategy, I concluded, “the likelihood of the United States Armed Forces suffering an eventual defeat in Afghanistan is very high.”

The Pentagon’s response to my argument that we were losing the war? Lt. Gen. Curtis Scaparrotti, commander of U.S. troops in Afghanistan at the time, dismissed my views as “one person’s opinion,” but that he was confident in the military’s optimistic appraisal. “These (Afghan) soldiers will fight,” the general confidently said, “There is no question about that. They are going to be good enough as we build them to secure their country and to counter the insurgency.” Scaparrotti was far from the only one to deceive the American people, however.

One particularly egregious example came in November 2009.  A classified cable, sent by then-Ambassador Karl Eikenberry to Secretary of State Hillary Clinton, argued against Obama’s surge, laying out arguments that have proven prescient. It was likely, Eikenberry wrote, that “sending additional forces will delay the day when Afghans will take over, and make it difficult, if not impossible, to bring our people home on a reasonable timetable.”

Eikenberry’s extensive cable was remarkable for its accuracy in detailing why the surge would fail. In a telling section he wrote that U.S. leaders “overestimate the ability of the Afghan security forces to take over.” The ambassador concluded that he “cannot support DoD’s recommendation for an immediate presidential decision to deploy another 40,000 troops here.” Yet one month later, in public testimony before Congress, Eikenberry said the opposite.

Regarding Obama’s speech announcing his decision to order the surge, Eikenberry said to Congress the president’s plan “offers the best path to stabilize Afghanistan and to ensure al Qaeda and other terrorist groups cannot regain a foothold to plan new attacks against our country or our allies. I fully support this approach (emphasis mine).”  Official government lying only increased from there.

In late 2019, The Washington Post published “The Afghan Papers” that catalogues, in painful detail, just how pervasive and perpetual the lying really was. Regardless of the reasons, the vast majority of every public statement throughout the 20-year war was positive or “cautiously optimistic.” When conditions got so bad that leaders couldn’t spin it in a positive way, the military simply classified the statistics so the American people would be prohibited from learning the truth.

In congressional testimony in January 2020, Special Inspector General for Afghan Reconstruction (SIGAR) John Sopko revealed his frustration in trying to get accurate information out of American officials.  “There’s an odor of mendacity throughout the Afghanistan issue,” Sopko lamented. “The problem is there is a disincentive, really, to tell the truth. We have created an incentive to almost require people to lie.” Now eighteen months later, Sopko’s agitation has become even more palpable.

“You know, you really shouldn’t be surprised,” by how fast the Afghan military is collapsing, Sopko said in congressional testimony in late July. For at least nine consecutive years, Sopko continued, the SIGAR had been “highlighting problems with our train, advise and assist mission with the Afghan military.” Why did the American public not know about this weakness earlier?

Because across the board, the military made it increasingly hard – and eventually impossible – for the public to find out. At the hearing Sopko explained:

Every time we went in, the U.S. military changed the goal posts, and made it easier to show success. And then finally, when they couldn’t even do that, they classified the assessment tool… So, they knew how bad the Afghan military was. And if you had a clearance, you could find out, but the average American, the average taxpayer, the average congressman, the average person working in the embassy wouldn’t know how bad it was.

That observation was nothing new to Crocker, however, as he further admitted that “of all the painful lessons I carry out of my time in those two war zones, Iraq and Afghanistan, it’s the…corruption at every level, that is the starkest point.”

Yet despite these apparently deeply held views, the ambassador remains a stalwart advocate for continuing the U.S. war effort in Afghanistan. “In my experience, we just have a lack of strategic patience as a nation and as a government,” Crocker told the New York Times on Tuesday. How the ambassador squares his continued advocacy of the war with the experience he gained through two wars that the local security forces remain “hopelessly corrupt” and “useless as a security force,” after 20 years was not explained.

Behind the scenes America’s senior leaders have known, almost from the beginning, that the war was unwinnable, that the Afghan government was fatally corrupt, and that the Afghan security forces would never be up to the task. Instead of acknowledging reality, instead of coming clean to the American people, they hid the truth or outright lied about it. The result?

The mendacity deepened and expanded the U.S. failure. The lying pointlessly increased the number of American casualties the U.S. suffered, resulted in spending hundreds of billions that never had any chance of accomplishing a positive outcome, and, by covering up excessive corruption among Afghan leaders, gave tacit approval of them. 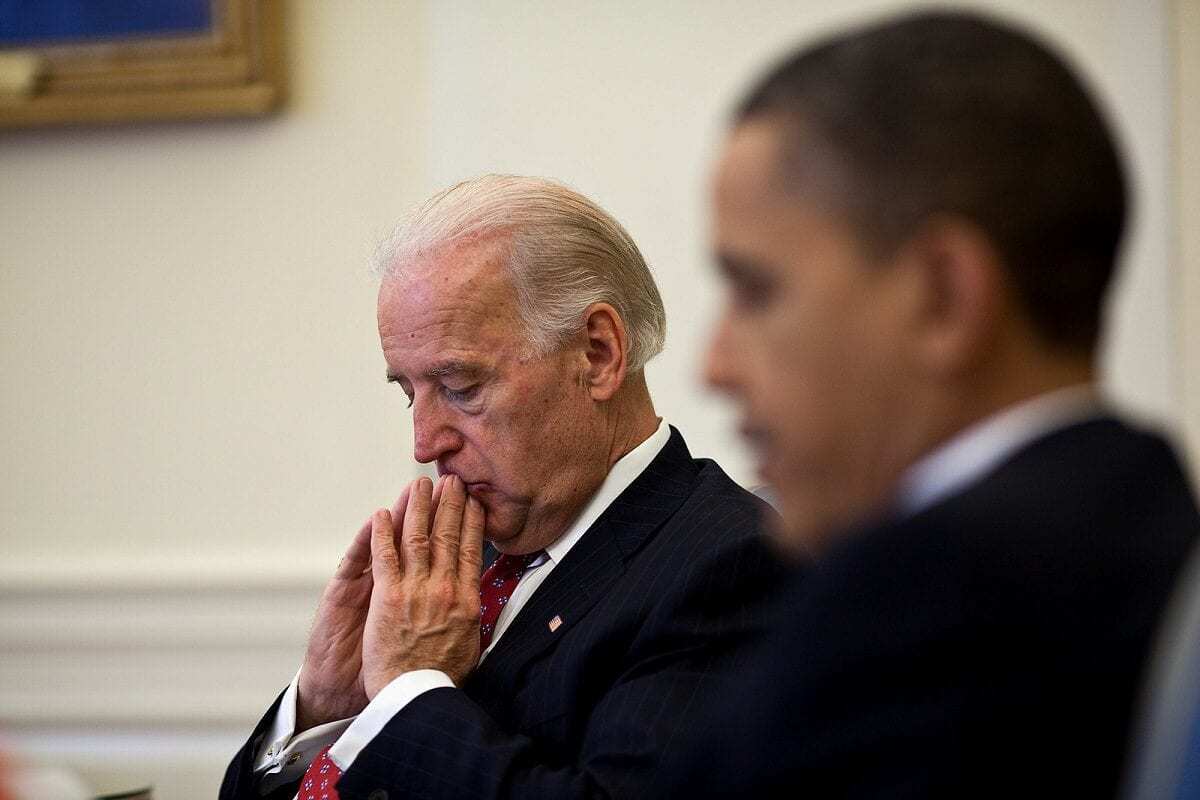 As awful as the security situation in Afghanistan is today, it was a disaster almost two decades in the making. The U.S. should have admitted the truth long ago and ended the war even before the conclusion of the Bush administration. Above all, America must permanently cease waging “nation-building” wars, restricting deployments abroad only to fights directly related to U.S. national security.

Italy Orders Companies Not To…

LESSON: The Left Cheered When…

Biden Has No Evacuation Plan…

“The Greatest Embarrassment in U.S.…

World leaders react as the…