President Joe Biden on Thursday detailed his administration’s plans to lower the cost of prescription drugs while calling on Congress to help tackle the issue by reducing high prices of life-saving medication.

Speaking from the East Room of the White House, Biden said he aims to help lower prescription drug costs nationwide as part of the ambitious Build Back Better agenda he is seeking to push through Congress.

The president argued that too many families are being forced to chose between paying for medications or putting food on the table and urged lawmakers to allow Medicare to negotiate drug prices directly and penalise drugmakers who raise prices faster than inflation.

“For years, the price of many prescription drugs has dramatically outpaced inflation,” Biden said.”These prices have put the squeeze on too many families and stripped them of their dignity.

“They’ve been forced, we’ve forced people into terrible choices between maintaining their health, paying the rent or the mortgage, putting food on the table. I mean, literally. And that’s the case for a lot of working families and seniors, even if you can get the care you need.”

During his speech, Biden praised drugmakers for their life-saving work developing COVID-19 vaccines but noted that “we can make a distinction between developing these breakthroughs and jacking up prices on a range of medications for a range of everyday diseases and conditions.”

The president said that Americans pay 2-3 times as much as people in other countries for prescription drugs, and a quarter of Americans struggle to afford their medications.

Medicare negotiates prices for every other type of health care but is barred by law from negotiating drug prices, leading to increased costs for consumers.

Under his plan, Medicare would be able to negotiate the price for a subset of expensive drugs that don’t face any competition in the market.

Negotiators would be provided a framework for what constitutes a fair price for each drug, and incentives would be put in place to make sure drug companies agree to a reasonable price.

“What we’re proposing is that we’ll negotiate a base—negotiate with the company based on a fair price, one that reflects the costs of the research and development and the need for providing for a significant prof- — a profit, but that’s still affordable for consumers,” the president explained.

To prevent drug prices from rising higher, Biden called on Congress to create reforms that will prevent drug companies from raising their prices “faster than inflation,” such as penalties. He also called for a $3,000 cap on the amount that seniors must pay out-of-pocket for drugs each year.

As per a White House fact sheet, the Biden administration will also work with local government “to import safe, lower-cost prescription drugs from Canada and accelerating the development and uptake of generic and biosimilar drugs that give patients the same exact clinical benefit but at a fraction of the price.”

Biden noted that his reforms could results in Medicare beneficiaries saving approximately $200 on average if drug costs are lowered, while the costs for employer health insurance would fall too, if Medicare makes the prices it negotiates available to commercial payers, too. 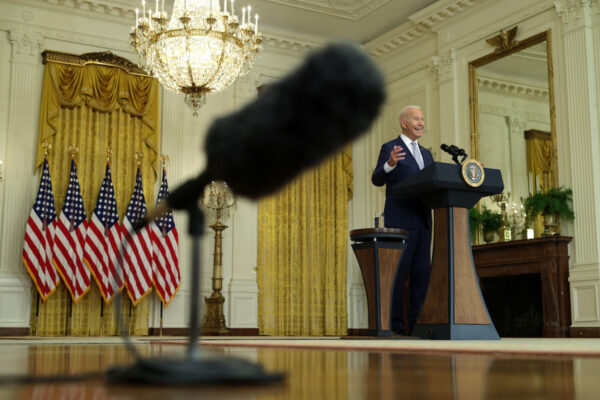 U.S. President Joe Biden delivers remarks during an East Room event at the White House Aug.12, 2021 in Washington, DC. He spoke on “how his Build Back Better agenda will lower prescription drug prices.” (Alex Wong/Getty Images)

Insulin prices could also fall by hundreds of dollars on average, while the price for some arthritis medicines might fall by more than $2,000 every month.

“This is about whethera or not you and your loved ones can afford prescription drugs you need. I look forward to the Congress getting this done. And there’s another area, this is another area where we can come together, make a difference in people’s lives.”

However, allowing Medicare to negotiate lower prices provokes fierce resistance from the pharmaceutical industry, with the Pharmaceutical Research and Manufacturers of America (PhRMA), branding it a “misguided approach.”

“The price controls proposed by the Biden administration are nothing more than a tax on the research investments that have made break-throughs, like the COVID vaccines, possible,” U.S. Chamber of Commerce Vice President Neil Bradley said.

“Price controls will result in less research investment and fewer U.S. jobs, leaving America unprepared for the next public health crisis and delaying the development of treatments for cancer, Alzheimer’s and many other diseases,” he said.

By Withholding Regeneron, Biden Could…

Protests Erupt in Tennessee and…

Did the CDC Director just…

Dr. Fauci: Masks Are Not…

All Evidence Points to COVID-19…

Here it is: The actual…

DeSantis to prohibit schools from…

Despite ‘Delta’ Alarmism, US COVID…

CDC Goes All in on…