Homeland Security Secretary Alejandro Mayorkas announced Thursday that more than 212,000 migrants were encountered in July – the latest consecutive month in which border numbers have skyrocketed under the Biden administration and another serious blow to the White House’s border strategy.

Mayorkas, in a visit to the border in Texas, said that 212,672 migrants were encountered at the southern border in July, a 13% increase over the already massive 188,000 migrant encounters in June. In July 2020, there were just 40,929 encounters.

He emphasized that many of those 212,000 resulted in expulsions under Title 42 public health protections, with 95,788 Title 42 removals. However, that number is lower than in June, where 104,907 migrants were removed under Title 42. He also said that 27% of those encountered had at least one prior encounter in the past 12 months.

While the majority of single adults were expelled under Title 42, he said just 12% of migrant families were removed under the public health order.

Mayorkas appeared to acknowledge that the situation at the border was grim, describing it as “one of the toughest challenges we face.”

“It is complicated, changing and involves vulnerable people at a time of a global pandemic,” he said.

Additionally, while he noted that numbers had been rising since April 2020, “the increase is most certainly sharper over the last several months and greater than in June.”

The Biden administration has been facing increasing pressure, from Republicans and some Democrats, over the surging crisis at the border amid concerns about criminals entering as part of the migrant wave as well as the risk of COVID-19 coming from the release of migrants into communities.

Mayorkas recognized the challenge of COVID-19, and said resources were stretched, but the positivity rate among migrants was lower than the general population and the administration is “building new capacity to address the situation, and we are doing so as rapidly as possible. 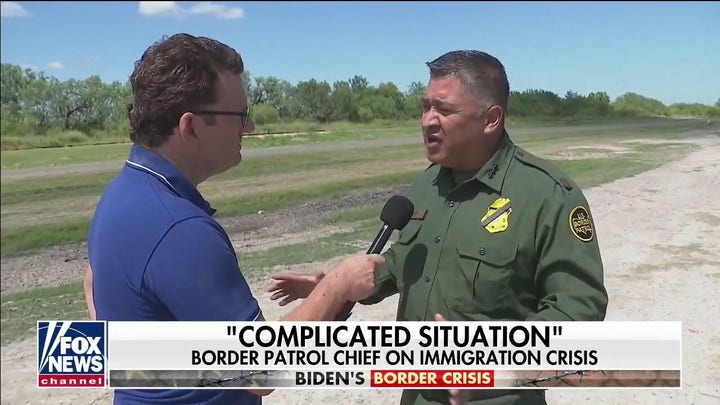 “The extent of the challenge should not be understated, but nor should our ability to meet it,” he said.

While Republicans have blamed the Biden administration’s rollback of Trump-era border protections for the surge, Mayorkas continued to emphasize “root causes” like poverty, corruption and violence in Central America. The administration has focused on root causes, and Vice President Kamala Harris unveiled a number of initiatives in June to tackle them.

Mayorkas also said the resurgence of the American economy “and the gleam of the American promise once again” was a factor for why migrants are making the journey to the U.S. He said the ending of the Trump administration policy and the reestablishment of asylum laws were factors, as well.

“Another reason is the end of the cruel policies of the past administration and the restoration of the rule of laws of this country that Congress has passed, including our asylum laws that provide humanitarian relief,” he said.

Despite the surging numbers that are now the highest in years, Mayorkas said the administration intended to continue with its border strategy, which he said involves rebuilding “safe, legal and orderly pathways for migrants,” improving processing, and going after smugglers.

“We have a plan, we are executing our plan and that takes time,” he said.

However, Republicans soon made clear that they believe the blame for the crisis rests squarely on the Biden administration.

“As record after record is broken on the border, Biden and Harris are failing Americans with the raging crisis they created,” Republican National Committee communications director Danielle Alvarez said in a statement.

“The 212,672 border apprehensions in July underscore the failed policies of the Biden administration that have resulted in a surge of illegal immigrants and border-related COVID cases, a flood of deadly drugs entering the United States, and a rise in crime in border towns. It is time to secure our border and reverse Biden and Harris’ failed open border policies,” she said.