“LeBron James should focus on basketball rather than presiding over the destruction of the NBA, which has just recorded the lowest television RATINGS, by far, in the long and distinguished history of the League,” Trump wrote.

“His RACIST rants are divisive, nasty, insulting, and demeaning. He may be a great basketball player, but he is doing nothing to bring our Country together!”

Trump’s critique comes after the NBA player on Wednesday posted to Twitter a photo of Columbus Police officer Nicholas Reardon, with a comment, “You’re next.”

Reardon on Tuesday fatally shot 16-year-old Ma’Khia Bryant in Columbus, Ohio, while Bryant was attacking a young woman with a knife. The attack was captured on body cam video footage released by Columbus Police just hours after the incident.

James’s Twitter post came on the same day that former police officer Derek Chauvin was found guilty of murder in the May 2020 death of George Floyd.

James on the following day deleted his tweet and subsequently posted another message explaining his actions.

“ANGER does [sic] any of us any good and that includes myself! Gathering all the facts and educating does though! My anger still is here for what happened that lil girl. My sympathy for her family and may justice prevail!” James wrote.

He continued, “I’m so [expletive] tired of seeing Black people killed by police. I took the tweet down because its [sic] being used to create more hate—This isn’t about one officer. it’s about the entire system and they always use our words to create more racism. I am so desperate for more ACCOUNTABILITY.”

James’ statement was also criticized by the National Fraternal Order of Police, which represents more than 356,000 sworn law enforcement members. The group said that James “should educate himself” about the situation.

“This is disgraceful & extremely reckless. The officer saved a young girl’s life. No amount of gaslighting will change that fact.”

The video footage shows Reardon approaching a driveway where a group of people are standing, soon after which Bryant, who can be seen holding a knife, attacks a young girl, who falls to the ground.

“Get down! Get down!” Reardon can be heard saying.

Bryant promptly turns around and appears to try to stab another girl in pink clothing. Reardon then opens fire at Bryant, who falls to the ground after four consecutive gunshots. She drops a black-handled blade on the sidewalk.

“We know based on this [body cam] footage the officer took action to protect another young girl in our community,” Columbus Mayor Andrew Ginther said at a news conference on Tuesday.

Reardon has been placed on administrative leave, pending an investigation by the Ohio Bureau of Criminal Investigation.

Investigators will determine whether the killing complies with state law, which states that “deadly force can be used to protect yourself or the protection of a third person,” Interim Police Chief Michael Woods told reporters late Tuesday. 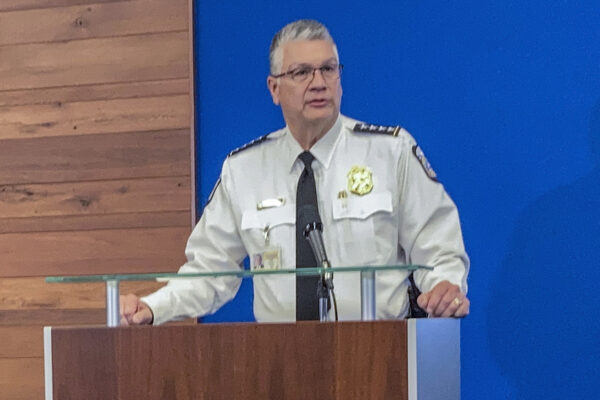 Woods was asked on Wednesday to what degree should an officer use a taser instead of a gun in a life-threatening situation.

“What I can say is when officers are faced with someone employing deadly force, deadly force can be the response the officer gives,” he responded, noting that his comments are not specific to the incident.

He added, “If there’s not deadly force being perpetrated on someone else at that time, an officer may have the opportunity to have cover, distance, and time to use a taser. But if those things aren’t present and there is an active assault going on in which someone could lose their life, the officer can use their firearm to protect that third person.”

Zachary Stieber contributed to this report.

Inflation speeds up in April…

IRS employees say ‘out of…

Copper is ‘the new oil’…

The US Government’s Debt-to-GDP Ratio…