Seventeen US states have reported more new coronavirus cases in the past week than in any week prior. The country’s seven-day average of new cases has risen about 25% since October 1, with the number of new cases climbing in 41 states over the past two weeks. The US is now seeing an average of more than 50,000 cases per day.

“I’m not a doomsday person: but this is the beginning of the wave,” Dr. Megan Ranney, an emergency-medicine physician at Brown University, wrote Thursday on Twitter.

Indeed, the US has entered its third major wave of infections — one experts worry could wind up being the largest. The reason, they say, is a combination of factors: Lockdown measures have lifted, more people are spending time indoors as weather gets cold, residents are feeling fatigued by safety measures, and cases never dropped sufficiently.

“If the rates never get that low, and basic public-health measures are not universally adopted, and then you bring people indoors to share a meal together, you’re kind of putting together the perfect storm,” Ingrid Katz, an assistant professor at Harvard Medical School, told Business Insider. “Unfortunately this was completely anticipated.”

Indeed, the University of Washington’s Institute for Health Metrics and Evaluation (IHME) predicted in August that more than 20 states would need to reimpose lockdown measures before December, including closing nonessential businesses and reinstating stay-at-home orders. Their model predicted at least 175,000 more people in the US could die from now through February 1. That would make this third wave the deadliest yet.

“The infections that will fill our hospital in 2 weeks have already been transmitted,” Ranney said. “Wear a mask and get ready to hunker down again.”

During the first wave in the spring, US cases were concentrated in the Northeast. By the second wave this summer, cases had migrated to the South and Sunbelt. Now cases are concentrated in the Midwest, but the virus is more widespread than ever before — it’s had 10 months to spread, after all.

What remains the same, however, is that the US continues to be hamstrung by insufficient contact tracing and a widespread distrust of scientific recommendations.

“We still don’t have a national coordinated response. We still have a lot of misinformation about simple, basic public-health behavior, like wearing a mask, which we know is effective,” Katz said, adding, “in a way, we’re battling two pandemics — that of COVID itself and then, of course, the misinformation that surrounds it.” 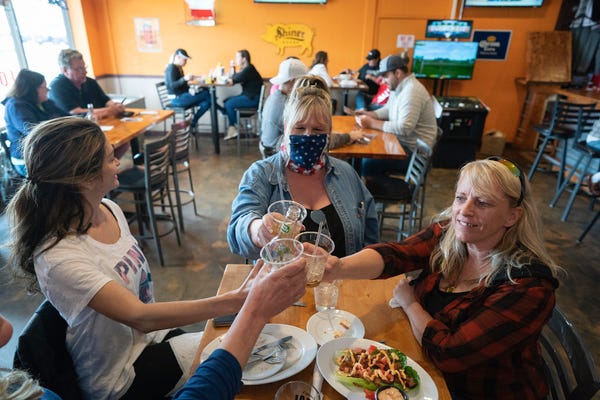 Jonesy’s Local Bar in Hudson, Wisconsin, on May 14.

But it’s understandable that some Americans are struggling to follow public safety measures, she added, since many people have developed “pandemic fatigue.” That could make them less likely to remain at home or stay informed about local transmission. As schools and businesses reopen, others may get the false impression that those environments are now completely safe.

“We’re seeing a roller coaster in the United States,” IHME Director Dr. Christopher Murray said in a statement. “It appears that people are wearing masks and socially distancing more frequently as infections increase, then after a while as infections drop, people let their guard down and stop taking these measures to protect themselves and others – which, of course, leads to more infections. And the potentially deadly cycle starts over again.”

Though new cases are concentrated in the Midwest, experts said they could quickly spill into other parts of the country.

At least 14 states have test-positivity rates — the share of coronavirus tests that come back positive — above 10%, according to data from Johns Hopkins University. Dr. Anthony Fauci, the director of the National Institute of Allergy and Infectious Diseases, has said test-positivity rates should ideally sit below 3%. A rate between 7 and 9% is “very disturbing,” Dr. Howard Koh, a professor at the Harvard T.H. Chan School of Public Health, previously told Business Insider.

The US’s overall test-positivity rate was at 5.2% on Thursday, a slight uptick from 4.6% on October 1. 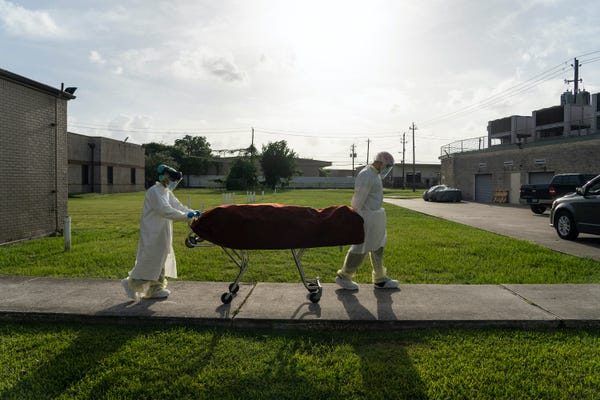 Medical staff push a stretcher with a deceased patient outside the COVID-19 intensive-care unit at United Memorial Medical Center in Houston on June 30.

Coronavirus hospitalizations are on the rise as well. As of Friday, they’d risen by 21% compared with three weeks prior. A dozen states — including Montana, North Dakota, and Wisconsin — have seen record hospitalization rates in the past week, The Washington Post reported Thursday.

It’s difficult to know whether this will translate to a proportional uptick in deaths. Doctors have gotten better at treating patients since the start of the pandemic, and death rates vary depending on the specific population groups that get exposed or infected, but there’s still no cure for the virus.

If hospitals start to become crowded, public-health experts say that could create a need for tighter lockdown restrictions again.

No Science Justifies Bans on…

Dozens of policymakers have violated…

Cuomo is to blame for…

Up to Half of Health…

Wuhan coronavirus infections may be…

Tennessee Data for Masked vs.…

Fauci shrugs off LYING about…