President Donald Trump is losing in the polls. About 25 million people are unemployed, but there’s little chance for a stimulus package until after the November election. Trump and dozens of other people at the White House are among the 7.6 million Americans who’ve gotten sick from the coronavirus. More than 212,000 people in the US haven’t survived it.

It’s not the picture of America Trump wanted to run his reelection campaign on. Instead, he’s ready to make America 2019 again. That was a time when unemployment reached historic lows and the president could confidently run on an economic record, one he promises to restore if given another term.

The way one of his closest advisors, Brooke Rollins, sees it, it’s up to the president’s team — including herself — to help make the case for Trump’s reelection.

Rollins, 48, is the acting director of Trump’s Domestic Policy Council, where she’s in charge of coordinating and implementing the president’s agenda. If Trump wins, Rollins would have the opportunity to stay at the White House in a job that involves handling the fine print of the president’s domestic policy.

Much of her pitch for her boss leans on where the US was in the pre-coronavirus era: the strong economic record that resulted in job growth and record-low poverty rates for Black and Hispanic Americans, as well as people with disabilities and veterans. She said she believed Trump could do it again and saw his willingness to fight for America as unmatched by any president.

“I am more encouraged, optimistic, hopeful, and more positive than I’ve ever been before on what good he can do for all of America, but especially those who have been underserved or not served at all for so long,” Rollins said in an exclusive interview with Insider earlier this week. 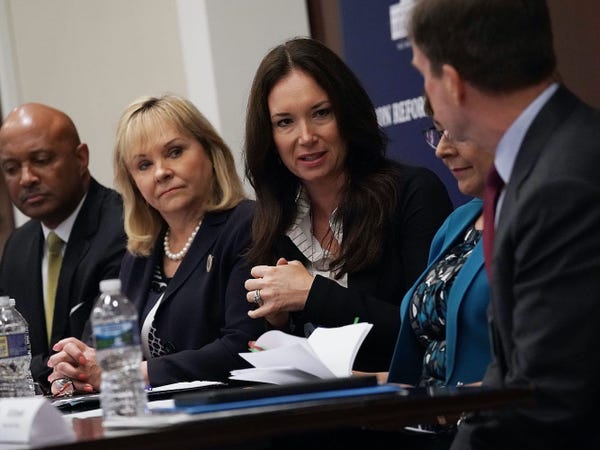 Rollins’ interview with Insider on Tuesday came a day after Trump left Walter Reed National Military Medical Center, where he was treated for the coronavirus. The president had returned to the White House, and some staff were working from home. Rollins remained in the West Wing, which she described as “a little quieter than normal.”

The Domestic Policy Council she has led since May isn’t the most visible White House office, but it’s hugely influential. Operating largely behind the scenes, its 31 employees are responsible for carrying out the nitty-gritty of policymaking and bringing different Cabinet members together. They ensure the various parts of government are on the same page and help carry out the president’s vision.

Jared Kushner, the president’s son-in-law and senior advisor, brought Rollins to the White House in 2018 because of her input on criminal-justice reform. Before that, she was the president and CEO of the influential conservative Texas Public Policy Foundation for 15 years and had advised the Trump campaign on economic policy.

At the White House, Rollins initially led the Office of American Innovation, which was made up of a dozen team members. The office used ideas from the business world to overhaul government operations, and it was wrapped into the Domestic Policy Council when Rollins made the transition there.

Rollins’ job at the White House is to coordinate the administration’s handling of issues from healthcare to economic policy and education and highlight the president’s policy achievements. She has Trump’s ear, meeting with him frequently in the West Wing. She helps write and edit speeches and advises him on crucial issues.

“I was so drawn to the president’s fight for all of America and how he was a disruptor and a change maker and a nonpolitician,” Rollins said.

Read more: Meet the 24 most powerful people advising Trump on healthcare as the president vies for a second term 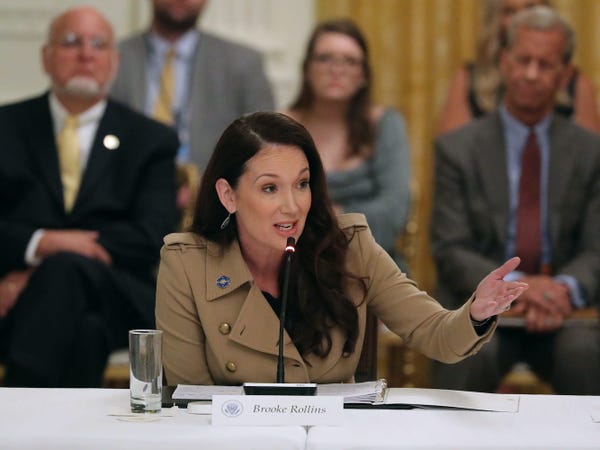 Rollins brings different people together for policy conversations and to spotlight the White House’s efforts.

Getting out of the pandemic

Insider reached out to Rollins to get more information about what Trump hoped to accomplish in a second term. In June, Insider DC Bureau Chief Darren Samuelsohn reported that the president remained vague on which policies he’d push in a second term. A bulleted list of agenda items wasn’t shared publicly until late August.

Similar to the president, Rollins sometimes speaks in broad strokes about policy. When asked about what items Trump would push during another four years in office, Rollins said the team was most focused on answering, “What does America look like?”

Rollins said the administration wanted to return to “normal” in 2021 after a vaccine is developed at the end of this year.

Coming out of the pandemic, Trump also wants to push for manufacturing critical medicines in the US — an idea that has bipartisan support. The US would refill stockpiles to prepare for future pandemics, she said.

Rollins’ job is separate from the day-to-day efforts of the coronavirus task force, but she has been part of White House roundtable discussions, including on reopening small businesses and schools.

She reiterated the administration’s desire to return children to school so that they would not fall behind academically and have access to food and counseling services. She also raised concerns about students who aren’t safe at home because of abuse or issues surrounding substance abuse.

Acknowledging the unprecedented nature of the coronavirus pandemic, Rollins said it was important to protect vulnerable teachers but added that “we don’t want the solution to be worse than the problem.”

During her interview, Rollins, also a wife and mother of four, often turned the conversation to “forgotten” Americans and elevated Texas as an example of responsible policymaking. Rollins was raised by a single mother who was a small-business owner in a small Texas town. She started out her career as a lawyer, then became policy director for then-Texas Gov. Rick Perry before joining the think-tank world. 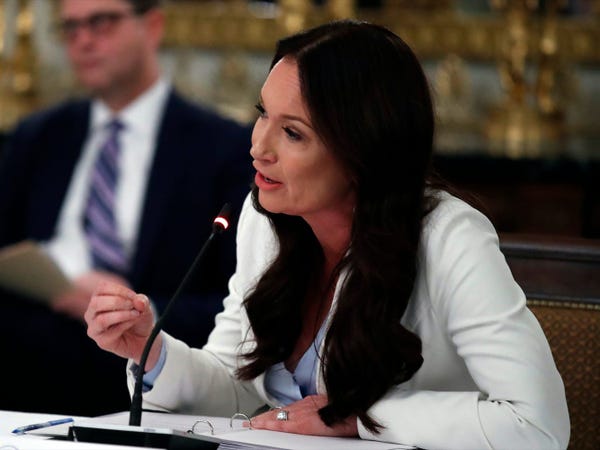 Rollins has worked for the White House since 2018.

A 2nd term similar to the first

Pressed for more specific details about a second Trump term, Rollins said the president would “absolutely” push for more tax cuts and nixing more government regulations beyond the myriad rules already removed from the books and create incentives to move manufacturing jobs to the US.

On drug prices, Rollins said the president would be open to “something similar” to a bill House Democrats passed this year but added that it would need to gain bipartisan support.

Trump signed an executive order in September that is similar to the Democrats’ legislation directed at letting the government regulate drug prices. Though a second term would allow his administration to press forward on trying to implement the order, that process is expected to take years and face lawsuits from pharmaceutical companies.

Congressional Republicans are against government interference with drug prices, but before the coronavirus pandemic, senators had started legislating bipartisan measures that would crack down on the pharmaceutical industry.

If reelected, Trump would continue other initiatives he started during his first term, such as pushing for more investment into pediatric cancer, ending HIV transmission, and joining with other countries to plant 1 trillion trees by the end of the decade, Rollins said.

Asked to share what her job is like working with the president, Rollins said Trump frequently seeks the opinion of his aides, including hers, before he makes decisions.

“He really leans on his team,” she said, adding: “I think that he really zeroes in on people in the room that he trusts and actually that are willing to disagree with him, which I’ve always been willing to do very respectfully. And we don’t disagree on much, but when he asks my opinion I always give it unvarnished.”

OANN suspended and demonetized by…

Report: Apple Is Lobbying To…

Tech companies are lining up…

Pfizer and BioNTech to request…

A Tesla rival is going…

LOreals US CMO is leaving…

Nasdaq, Other Trading Exchanges to…