President Donald Trump implied on Thursday night that he had yet to test negative for the coronavirus since his COVID-19 diagnosis, despite boasting that he had recovered.

Speaking with the Fox News anchor Sean Hannity, Trump dodged questions over whether he had been tested since he announced his positive test the week before and spent three nights in a hospital.

Hannity asked whether Trump had tested positive since last week. Trump responded that he would most likely be tested Friday and argued there’s no reason to be regularly tested.

“Well what we’re doing is probably the test will be tomorrow,” he said. “The actual test, because there’s no reason to test all the time.” 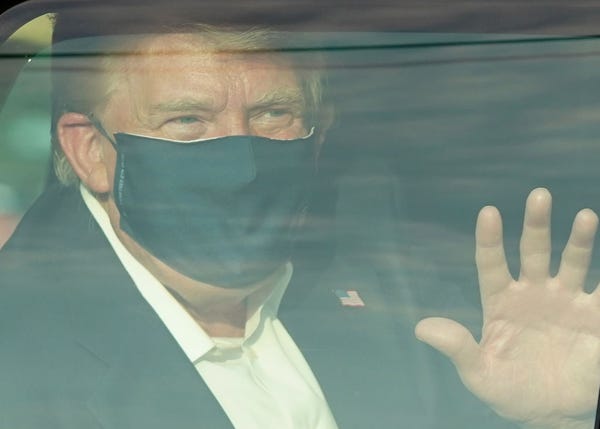 Trump in a motorcade outside Walter Reed National Military Medical Center in Bethesda, Maryland, on Sunday.

He also avoided earlier questioning on testing from Hannity.

When Hannity asked whether Trump had been tested recently, he responded: “Yeah, I just saw the doctors today. They got me in great shape. I’m in great shape.”

And when Hannity asked whether he had tested negative, Trump did not answer and instead pointed to an experimental cocktail of antibodies he had been given. “I’ll tell you I took this Regeneron, and it’s phenomenal,” he said.

The White House physician, Sean Conley, said in a memo Thursday that he thought Saturday was when Trump could make a “safe return to public engagements.”

Trump told Hannity he hoped to lead a rally in Florida on Saturday night and one in Pennsylvania on Sunday.

The US Centers for Disease Control and Prevention recommends that COVID-19 patients wait 10 days after their symptoms first appear before being around others (as long as they have not had a fever in the preceding 24 hours).

The White House has confirmed Trump tested positive for the virus last Thursday but has disclosed few details about Trump’s symptoms or when any first emerged.

Officials have instead obfuscated details of the president’s health.

That means it is unclear who is at risk among the people Trump saw in the busy week before he tested positive or when Trump is likely to stop being infectious. 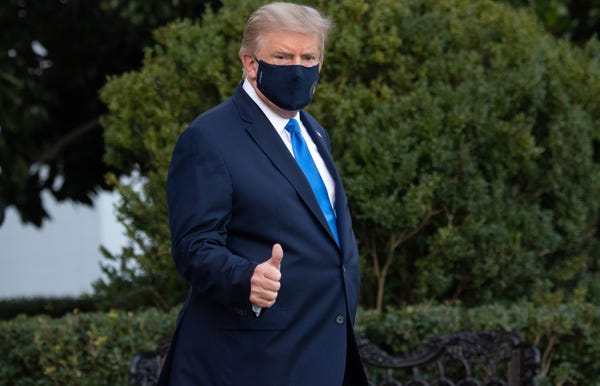 Trump on his way to Walter Reed last Friday after testing positive for the coronavirus.

As Business Insider’s Jake Lahut and Oma Seddiq reported, the last time Trump or anyone at the White House said on the record that the president tested negative was in May.

And, while Trump has bragged about returning to perfect health, he has shown evidence of ongoing symptoms.

He appeared to struggle to breathe in video footage showing him returning from the White House on Monday, and he had a cough during his interview with Hannity on Thursday.

Trump’s treatment plan also baffled experts, who told Business Insider that Trump was given treatments usually reserved for seriously ill patients. That, the experts said, could mean either that he was being overtreated or that he was more sick than his team had acknowledged.

Trump also returned to the White House even as experts warned that the worst of the virus might not be over.

The return panicked many White House staff given that he was most likely still infectious.

According to a leaked FEMA report, 34 people in Trump’s orbit had tested positive as of earlier this week.

Public needs to prep for…

‘We should be substantially back…

FDA approves emergency use for…

Insurance and you – why…