An airport in Finland is using sniffer dogs to try and detect whether people have the coronavirus.

Finland’s Helsinki-Vantaa airport is running a trial that lets people volunteer to be tested for the virus by the dogs, which researchers say could result in dogs being used as a faster and cheaper way to test than using nasal swabs.

Anna Hielm-Bjorkman, the University of Helsinki professor running the trial, said the dogs are “very good” at detecting the virus.

“We come close to 100% sensitivity,” she said, Reuters reported. 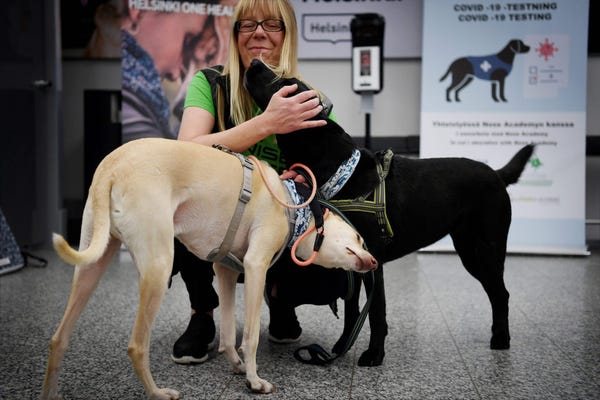 Four dogs have already started working at the airport, the University of Helsinki said. Ten dogs are being trained in total.

After they collect their luggage, passengers who volunteer to be tested by the dog wipe their skin with a wipe and drop it into a container, meaning people who are afraid of or allergic to dogs can still participate.

The dog then sniffs the sample and reacts if it detects the virus —typically by yelping, pawing, or lying down, The Guardian reported.

And the passenger is then asked to take a free test with a nasal swab to verify the dog’s reaction.

If a passenger tests positive they are directed to the Helsinki University Hospital’s health information station for further instructions. 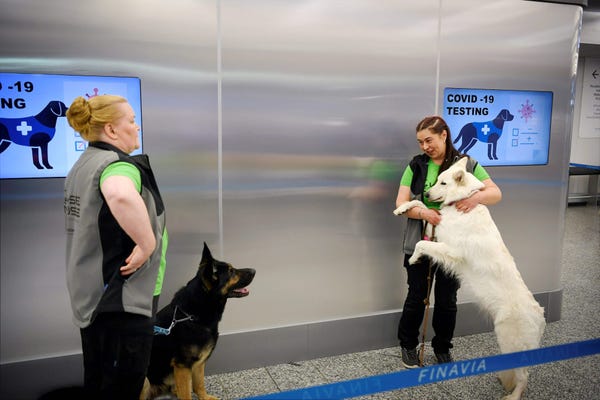 Two coronavirus sniffer dogs, named Valo and E.T., stand with their handlers at the Helsinki airport in Vantaa, Finland.

The university said that its preliminary tests show that “trained scent detection dogs seem to be quick in recognizing coronavirus from samples and might even be more sensitive than many of the tests that are now on the market.”

Medical dogs and police dogs across the world are being trained to detect the virus, though researchers are still working to prove how reliably dogs can do so, and in comparison to the way they can be used to sniff out other diseases.

Some in the scientific community are downright skeptical of the time and effort needed to train the dogs, and other tools for identifying COVID infections are more readily available and easier to deploy.

Finland’s project is the first time in Europe dogs have been put to work to try and detect the virus, The Guardian reported. Dubai’s international airport became the first airport to trial dogs for coronavirus tests last month. 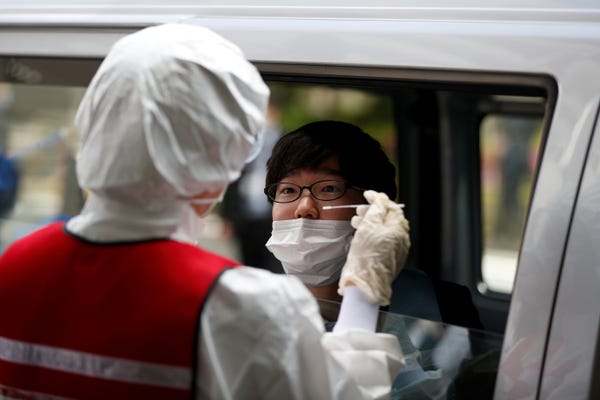 This is what a polymerase chain reaction (PCR) test for the coronavirus looks like.

The airport said that, if the pilot scheme is successful, dogs could replace other types of testing.

The researchers said that training a dog to detect the coronavirus “is relatively fast, and the results are good.”

But it said that the process can vary a lot depending on the individual dog.

“Learning the smell of coronavirus takes from a few hours to a few months,” they said.

“International peer-reviewed studies have shown that a dog’s ability to find positive patients is about 94-100%, depending on the dog.” 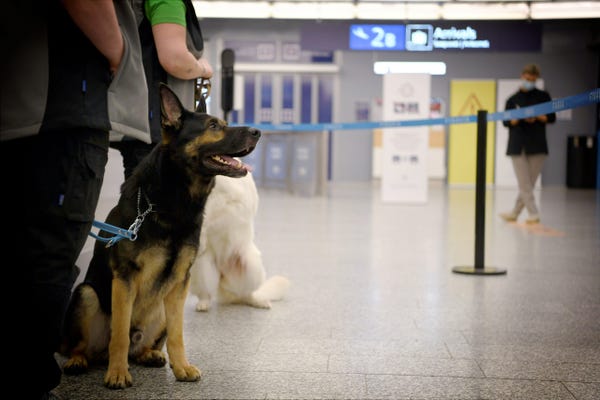 The airport said that one dog, Kössi — an 8-year-old greyhound mix — took just seven minutes to learn how to identify the coronavirus’s scent.

Timo Aronkyto, the deputy mayor of Vantaa, a city near the airport, said it was possible that coronavirus detection dogs could soon “go around passengers in a similar way to customs dogs.”

The Bank of England asks…

SCOTT GALLOWAY: Tesla is the…