KENOSHA, Wis.—La Estrella Supermarket, the neighborhood grocery. Uptown Beauty, the mom-and-pop supply shop. Uptown Restaurant, the locally-owned eatery. They have stood side-by-side on 22nd Avenue for years, serving Kenosha’s diverse Uptown neighborhood even as other storefronts closed or were lured toward high-traffic areas near the interstate.

The businesses—threatened in recent months by the coronavirus pandemic—took a harsh blow in late August, as civil unrest swept Kenosha following the police shooting of Jacob Blake, a Black man left partially paralyzed by the encounter. 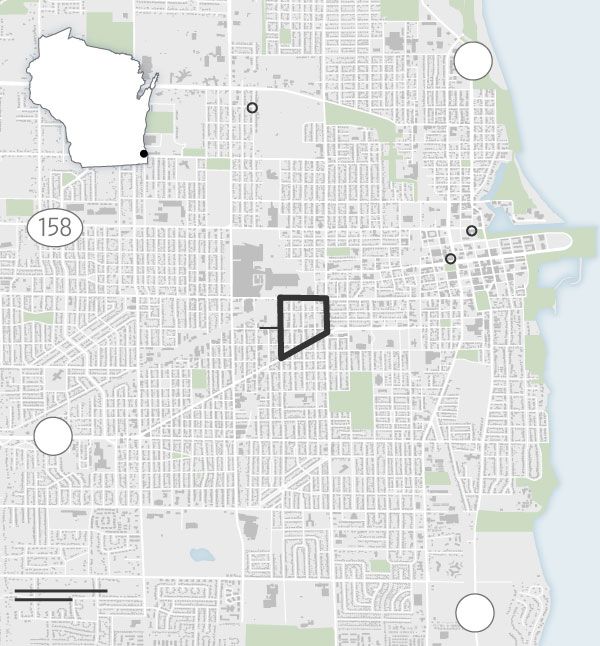 Local business officials have already tallied at least 56 businesses that were damaged or destroyed by looting and fire in two of Kenosha’s business districts: its downtown, where government buildings are located, and the Uptown neighborhood, where a main thoroughfare lined with businesses is surrounded by a residential neighborhood. City officials have said they believe the damage was largely the work of outsiders traveling into Kenosha. Damage is estimated at around at least $50 million.

The destruction has left shop owners in one of Kenosha’s oldest business districts grappling with why their businesses became casualties of the destruction that has followed protests against racism and police brutality, and whether they will have the money to rebuild and stay in the neighborhood.

While Kenosha’s population is 79.5% white and 11.5% Black, according to census data, locals say the Uptown neighborhood is one of the city’s most diverse areas, with a majority of minority-owned businesses.

Inside La Estrella Supermarket, owner Abel Alejo surveyed the water- and smoke-damage his shop suffered as firefighters tried to stop the spread of fires set as the unrest turned violent more than two weeks ago. Carpeting in a hallway was spongy with water as he surveyed packages of spoiling food that needed clearing out last week. A few piñatas still hung overhead from an intact part of the otherwise broken ceiling in the closed store.

He lamented the jobs and resources lost as the businesses burned, wondering what kind of setback it would mean for the neighborhood, where many residents depend on being able to walk or bike to the shops they need.

One Block in Kenosha 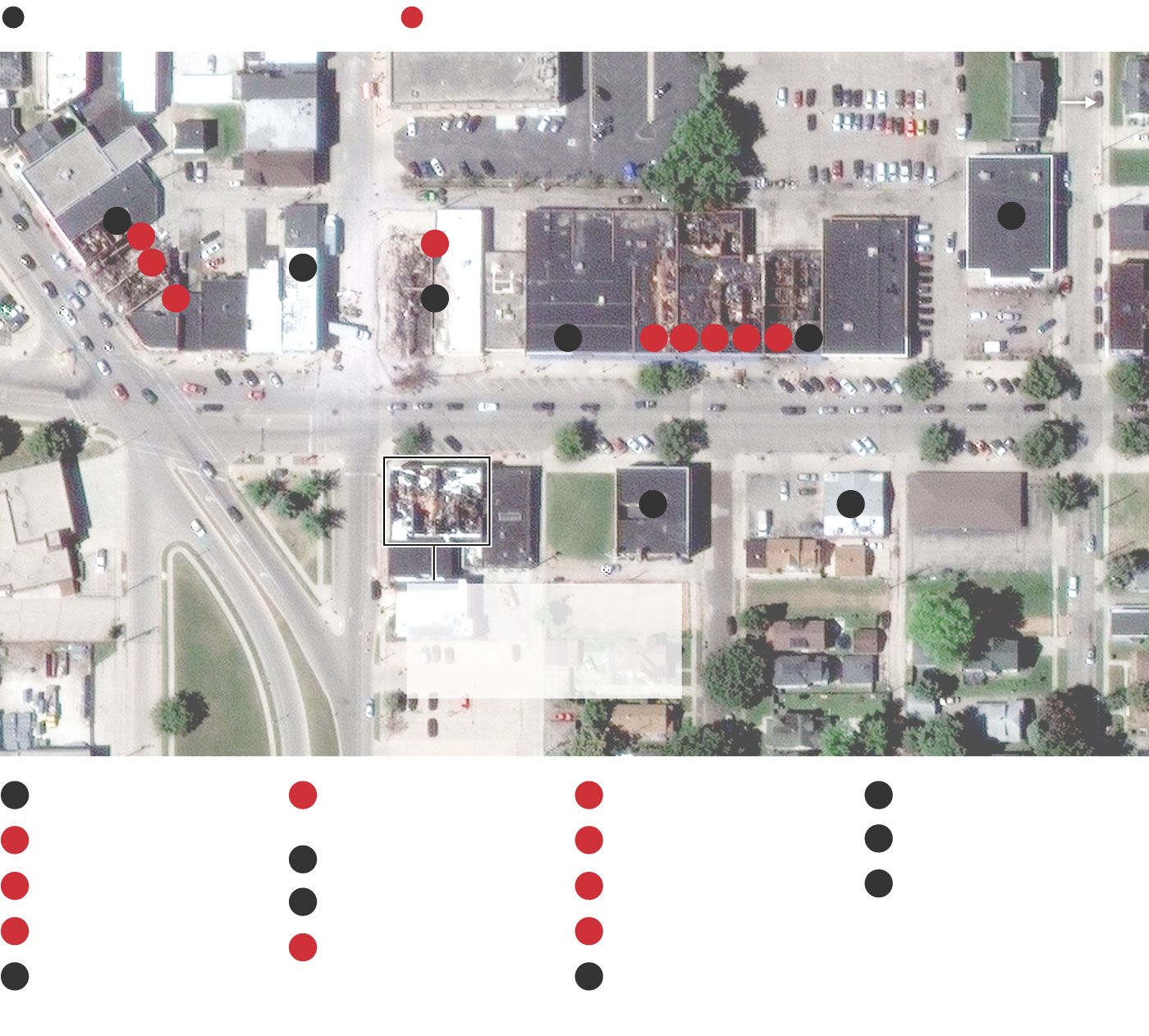 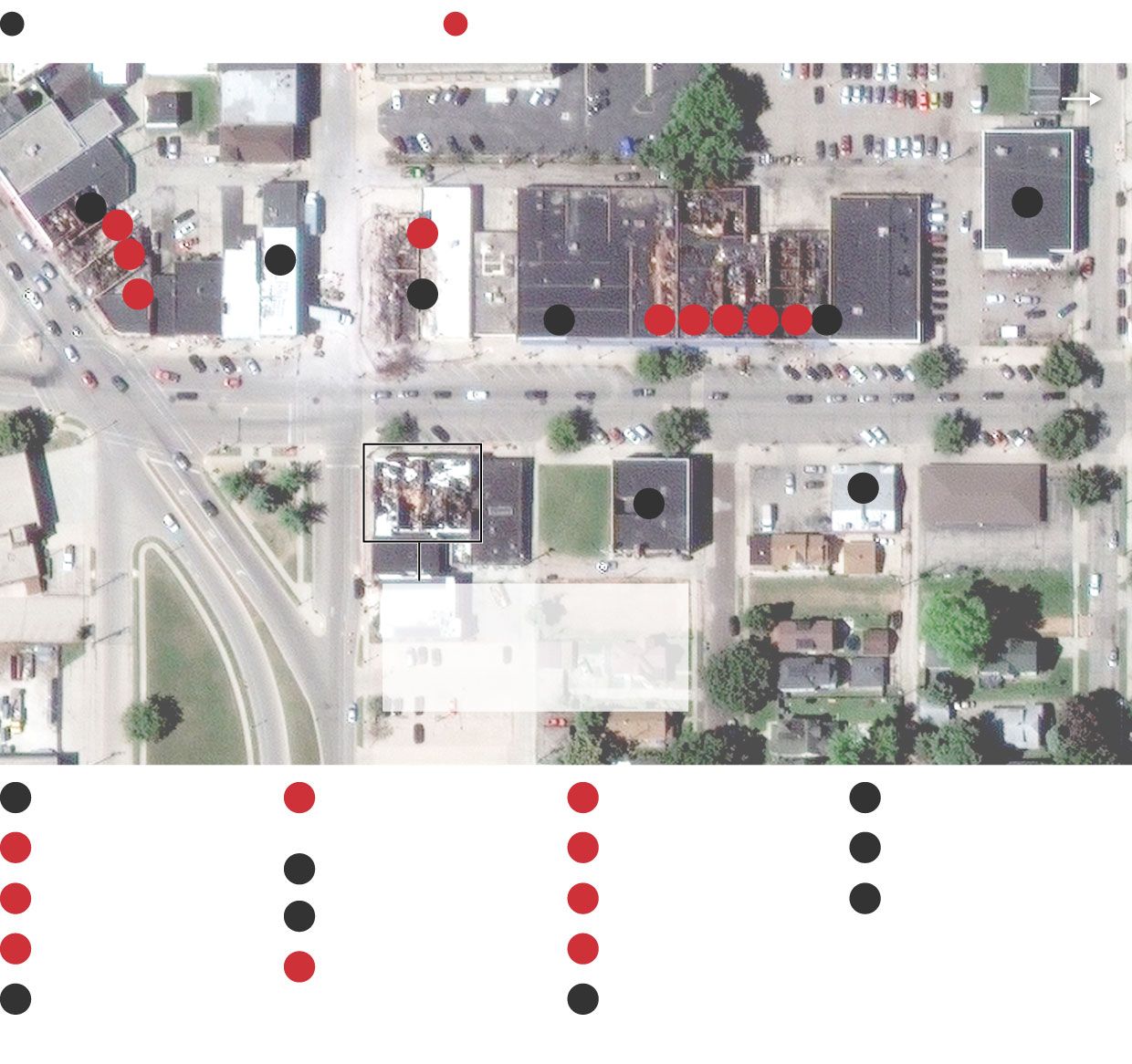 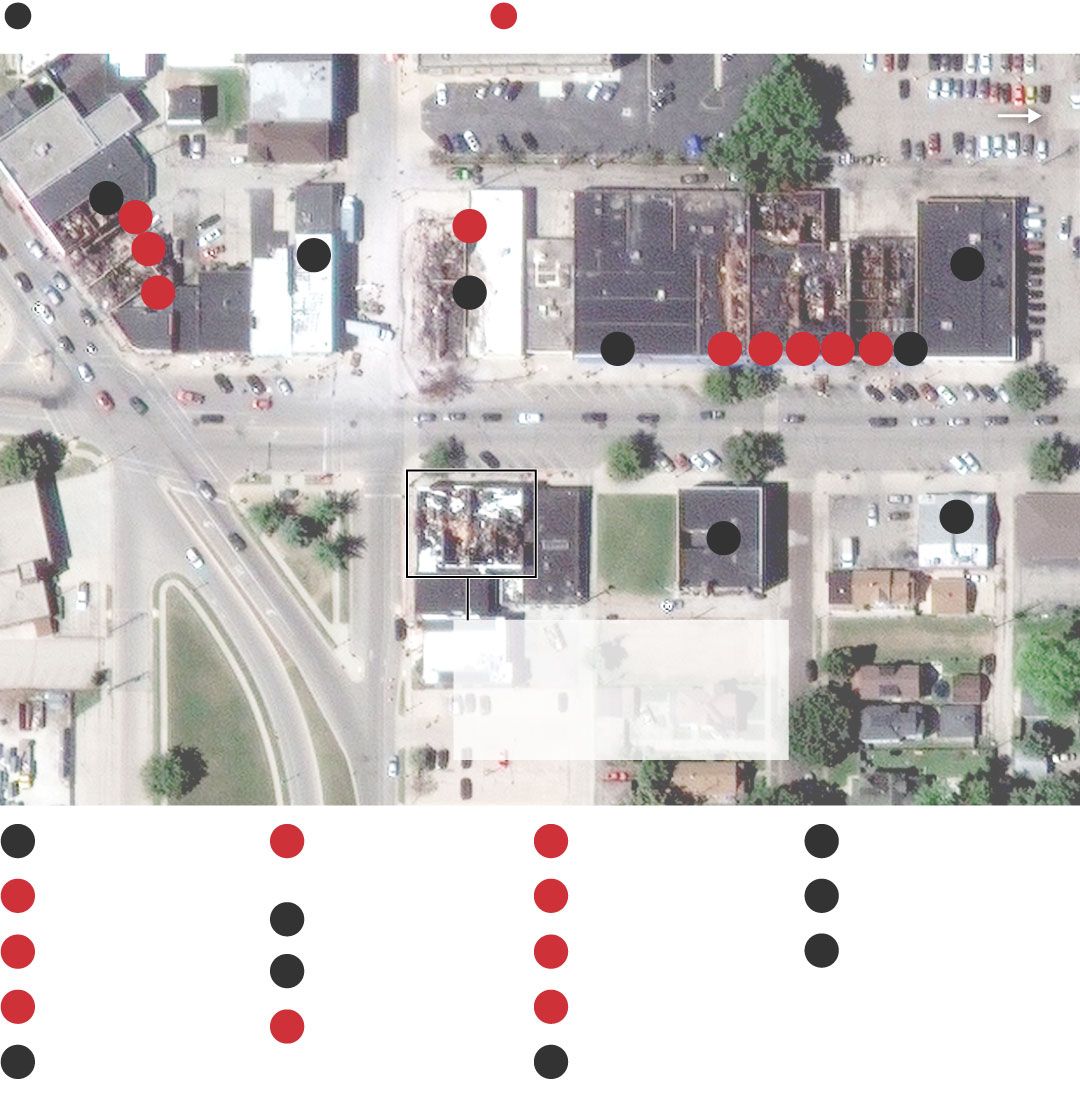 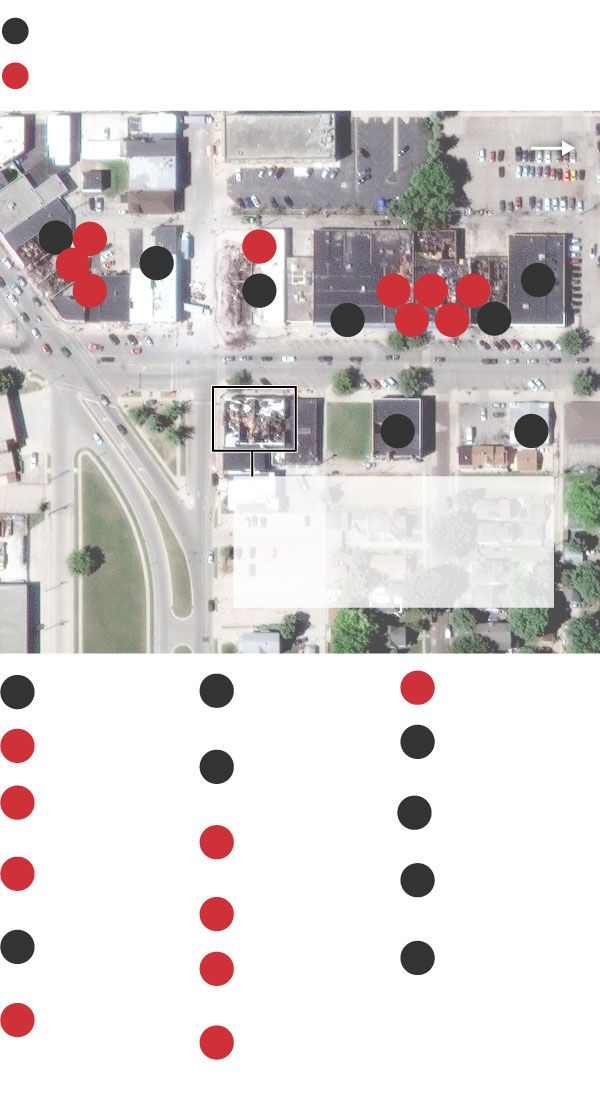 “I always think that people have the right to protest—to peacefully protest—but this goes beyond that,” said Mr. Alejo, who was born in Michoacán, Mexico, and has run La Estrella for more than five years. “They were destroying the neighborhoods that they want to protect.”

Clyde McLemore, founder of the Lake County chapter of Black Lives Matter, worries the destruction detracts from what groups like his are fighting for. He said he urged protesters with his BLM chapter to obey curfew and doesn’t believe they were part of the destruction.

“We’re not into doing anything to damage our community,” he said. “It waters down our message.”

Sidney Ayers, who lives above a store where windows were smashed, said he understood some of the protesters’ anger.

“You know, they kill us,” he said. “Every time they approach a Black, they don’t approach us as human beings, you know? “

Kenosha Reels After Shootings and Violence

Much of the damage on 22nd extends from a looted

on the corner of 61st Street to the Danish Brotherhood building a few blocks south, and beyond to the intersection of 22nd and Roosevelt Road, occupied by a tattoo parlor, a century-old camera shop, and a cellular retailer.

“This has put us a generation back,” said Jan Michalski, the Kenosha alderman who represents Uptown. “After the unrest and rioting, half the buildings in the Uptown area are either badly damaged or completely unusable.”

Kenosha Mayor John Antaramian has requested $30 million in state funding to help cover the property damage and other destruction, which his office says was “caused by violent demonstrators and rioters, led largely by people from outside the city.”

The Family Dollar store in Uptown.

The Wisconsin Economic Development Corp. has allocated up to $1 million to provide damaged businesses with as much as $20,000 in no-interest loans, according to Gov. Tony Evers’s office.

Yolanda Hernandez and Nelson Tejada, proprietors of Uptown Restaurant, said they watched the violence unfold via a live stream on

When they saw a fire being set near their business, they grabbed some fire extinguishers and started driving toward the eatery. When they arrived, they knew it was useless.

“We saw the fire extinguishers weren’t going to help,” Ms. Hernandez recalled as she stood in the park lot behind the burned down restaurant, which is now closed. “Everything was too big.”

The couple moved to Kenosha over a decade ago because they said it was the type of peaceful community in which they wanted to raise their daughter, Zaydi Tejada, now 22 years old. Ms. Hernandez first ran a candy store on the same block as the restaurant, which the family purchased from its previous owners about six years ago.

Ms. Tejada recalled how she used to pop by the restaurant before school to grab breakfast, then would return later to waitress. She and her family said they support peaceful protesters and see those causing destruction as something else: vandals. She rued how the destruction of Uptown Restaurant, which her family hopes to rebuild, would diminish the support they would normally give the community in a time of need.

“The attention we would have paid to that is now here,” Ms. Tejada said. “How are we going to put bread on the table in the next five months, six months?”

The owners of Uptown Beauty, which sits between the restaurant and La Estrella, are asking themselves similar questions. Married couple Dong Won Lee and Yang Soon Lee, both immigrants from Korea, have run the shop for 25 years.

Mr. Lee says they watched via a feed from a security camera inside the store as it was looted the night Mr. Blake was shot. The couple and their adult daughter, Alice Lee, spent the next morning cleaning up the damage—only to have the store go up in flames the following night.

“I didn’t even know how attached I was to the store, it was part of my childhood,” the younger Ms. Lee said, recalling how she used to occasionally nap in the back and could never remember prices when she worked the cash register as a teenager.

Mr. Lee says they’ll try to rebuild, though he’s still trying to wrap his brain around the damage, which insurance will only partially cover.

“Suddenly everything is gone,” he said.

Tony Farhan, a father of four who has owned the Cellular King Boostmobile on the corner of Roosevelt and 22nd for 12 years, said he watched his building being looted via a Facebook feed, and jumped in his car hoping to scare looters away.

Do you think that looting and burning hurts the protesters’ cause? Join the conversation below.

“Before I could even get to the store—I was around the corner but no way in—I get a phone call like, ‘Hey, your place is on fire,’ ” he recalled.

On a recent weekday, Mr. Farhan picked his way along the debris-strewn sidewalk outside his shop.

Mr. Farhan, who is of Palestinian descent but was born and raised in Kenosha, said he wants to keep his business going in Uptown but isn’t sure he’ll be able to find a new storefront in the neighborhood quickly.

“It’s going to take years to rebuild,” he said. “I have no idea which direction to go, honestly.”

The Powerful Consequences of 2020…

Senate to vote on Amy…

If Biden wins, he tells…

Trump could remove Wray as…

Nest of murder hornets in…