Videos of Black Lives Matter demonstrations in Rochester, New York show protesters smashing up three restaurants and ordering diners who were eating outside to leave.

Shouting “Black Lives Matter,” some protesters can be seen clearing tables and motioning for diners to get up and leave.

In another video, protesters are overturning chairs and tables and shattering glasses as diners look on.

Watch the clips below:

Some of the protesters are heard decrying the behavior and telling people to stop damaging the property.

One demonstrator told the Rochester newspaper Democrat & Chronicle that he disagreed with the actions, noting that one of the affected restaurants had posted an Instagram earlier in the day about providing water and a place for people to regroup.

“I don’t agree with seeing white families sitting out and eating and people running up on them and giving them a hard time,” Narada Riley said, according to the Democrat & Chronicle. “That’s not going to help the situation at all. But I can’t control the crowd.”

The three affected restaurant owners have since issued a joint statement on social media, supporting the protesters and saying that they understood “the anger and hurt our community is feeling right now.”

“Despite what videos might depict, we lost some glassware last night. You can not deny the anger and hurt our community is feeling right now,” the statement said, according to the Democrat & Chronicle.

“As always, the actions of a few agitators are amplified louder and louder as videos are shared and conclusions are drawn. We, now and always, stand with those standing against injustice. Stay safe. Listen. Love. Ever better,” it added. 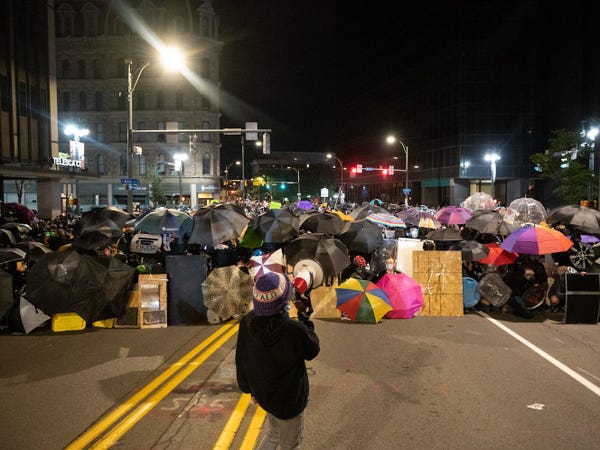 Hundreds of demonstrators march to the City Hall over the police killing of Daniel Prude in Rochester, New York, United States on September 5, 2020.

The protests in Rochester, which started on Wednesday night, have continued into Saturday night as thousands of protesters marched through the streets.

They come after the story broke of Daniel Prude, a Black man who died in March after Rochester police restrained and put him a “spit hood.”

Images from the protest on Saturday night show protesters wearing bike helmets and shielding themselves with umbrellas as they walk towards police barricades.

They have declared the demonstration to be an unlawful assembly but no arrests were made on Saturday.

‘When is the housing market…

Why Amazon workers in Alabama…

EVIDENCE: How CNN Faked A…

Why Joe Biden Must Avoid…