On Thursday morning, NASA will launch its fifth Mars rover: a robotic scientist the size of an SUV.

The $2.4 billion nuclear-powered vehicle, named Perseverance (or “Percy” for short) is designed to trundle along the Martian surface, mine for signs of ancient life, capture high-quality video and audio, and collect rock and soil samples for a future rocket ride back to Earth.

In preparation for future human landings on Mars, the rover will also carry an experimental device that converts carbon dioxide from the planet’s thin atmosphere into oxygen and even test samples of potential space suit material to see how well they hold up against the punishing Martian environment.

And if that wasn’t enough, tucked into the rover’s belly is a drone named Ingenuity. If it works, it’d be the first vehicle to achieved powered flight on another world.

Perseverance is scheduled to launch at 7:50 a.m. ET on Thursday from Cape Canaveral, Florida, atop an Atlas V rocket built by United Launch Alliance.

“The #MarsPerseverance launch crew is on station. Mighty Atlas is looking good. Weather is holding at [probability of go] 80%. The board is green. Seems like a good day to go to another planet,” Tory Bruno, president and CEO of ULA, tweeted on Thursday morning.

The liftoff will be streamed live on NASA TV, and you can watch via the embedded player below. The broadcast started at 7 a.m. ET.

Perseverance is 1 of 3 mission launching to Mars this summer

The liftoff will mark the third Mars-bound mission to begin this month. It follows the launch of the United Arab Emirates’ Hope probe, which aims to orbit Mars to chart a global map of its climate. China’s Tianwen-1 mission, meanwhile, is expected to put a rover on Mars that will use radar to hunt for underground pockets of water and also put a spacecraft into orbit to study Mars’ atmosphere.

The launches were all scheduled closely together in order to hit a critical window in Mars’s orbit: The period when its path aligns most closely with that of Earth. That window comes in February 2021, which is when the spaceships are expected to arrive at Mars. Because of fuel and weight constraints, missing the chance to launch now would have required space agencies to wait until 2022.

Perseverance is scheduled to land at Mars’ Jezero Crater (below) on February 18 and will, for the first time, record its harrowing descent to the surface that NASA calls the “seven minutes of terror,” so named for the amount of time engineers must wait to confirm a successful touchdown.

Jezero crater, once flooded with water, was selected after five years of careful study by planetary scientists because its rock and clay have the potential to contain electrochemical signatures of former life. 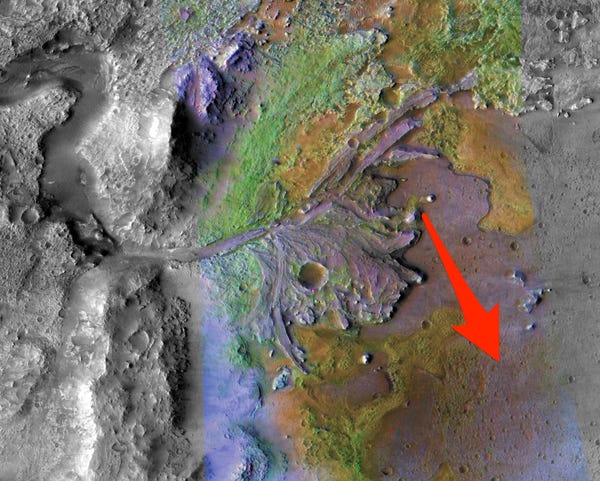 NASA will attempt to land its Mars 2020 nuclear-powered rover in Jezero Crater, where the space agency will collect its first Martian soil samples for a future rocket launch to Earth.


The same features that make the Jezero crater appealing for study make it a difficult place to land a rover, however: The site’s varied terrain is full of dips, ridges, and boulders. But engineers have made advances in landing technology, including the development of a more precisely timed landing parachute, since NASA’s last rover, Curiosity, arrived on Mars in 2012. Most recently, the agency successfully dropped its InSight lander on Mars in November 2018.

If all goes well, Perseverance will be the fifth Mars rover mission managed by NASA’s Jet Propulsion Laboratory, and also the fifth successful Mars rover landing overall (unless China’s lands first). Yet another Mars rover called Rosalind Franklin — a collaboration between the European Space Agency and the Russia’s Roscosmos — is scheduled to launch in 2022.

This story has been updated. It was originally published on July 29, 2020.