A Niles, Illinois, Police Department Sgt. has been left in critical condition following a fatal crash allegedly caused by an illegal alien who was shielded from deportation by former President Obama’s Deferred Action for Childhood Arrivals (DACA) program.

Ivan Robles Navejas, a 28-year-old illegal alien from Mexico, was arrested and charged by the Kerr County, Texas, Sheriff’s Office on six counts of intoxication assault with a vehicle and three counts of intoxicated vehicular manslaughter.

According to police, Navejas was driving drunk when he crashed into members of the Thin Blue Line motorcycle club — made up of active duty service members, law enforcement officers, and retired officers.

The three men killed in the crash were: 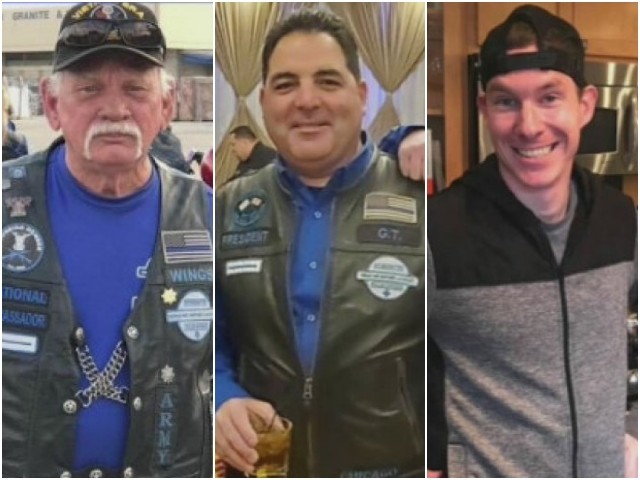 Jerry Harbour (left), Joseph Paglia (center), and Michael White (right) were killed in a crash allegedly caused by an illegal alien who had been shielded from deportation by Obama’s DACA program. (Photos via Facebook)

Police Sgt. Joseph Lazo, 39 years old, was also one of the nine Thin Blue Line members injured in the crash. According to the family’s GoFundMe page, where donations are helping to pay for his recovery, Lazo has undergone surgery on one of his legs.

Jenni Ward, Lazo’s sister, told the Plainfield Enterprise that they are hopeful but still unsure of what’s to come.

“He had a 12-hour surgery initially to try and repair his leg and he has rods and screws and at this time, they are just monitoring how well the leg will heal,” Ward said. “We just don’t know at this point what the outcome will be.”

“[Lazo] is in good spirits and just wants to get back up this way. The hospital has no visitors because of COVID, so as much as we wanted to jump on a plane and get there for him, we can’t get in,” Ward said. “All we can do is talk to him on the phone.”

The Immigration and Customs Enforcement (ICE) agency confirmed Navejas had been in the U.S. through the DACA program — a federal authority that kept him in the country despite multiple run-ins with the law.

At the time of the fatal crash, Navejas had been out on bail for a 2018 case in which he allegedly hit a man with his truck — pinning him up against his truck and another vehicle — before biting his ear off and biting his back.

For that incident, Navejas was detained on a $65,000 bail. He posted that bail and had been out awaiting trial at the time of the crash that killed Paglia, Harbour, and White.

Since DACA’s inception, more than 2,100 recipients of the program have been kicked off because they were found to be either criminals or gang members.