Refrigerated trucks are being sent to Texas and Arizona in anticipation of a spike in coronavirus deaths in the two southern states.

They are among several states seeing a new wave of coronavirus cases at the moment.

As of Sunday, Arizona’s hospitals were at 90% capacity. Meanwhile, Texas is dealing with more than 124,000 new cases across the state, according to state data.

While deaths haven’t climaxed yet, they usually follow a few weeks after cases begin to rise, so a new wave of deaths is almost certainly on the way.

In anticipation of this, counties and hospitals in both states have started requesting refrigerated trucks to hold the dead in, with morgues likely to run out of space. 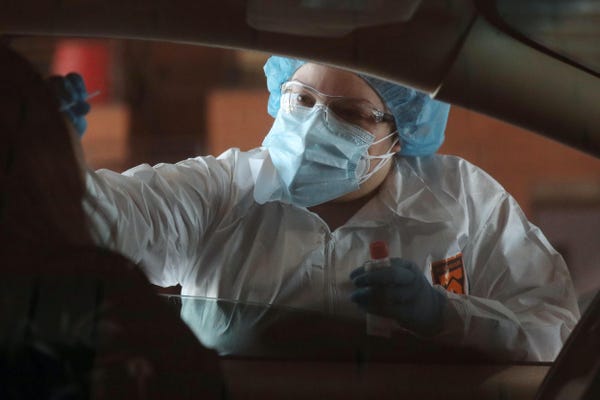 A healthcare worker administers a coronavirus test in Phoenix, Arizona.

Abrazo Helath, a hospital in Phoenix, says it currently has enough morgue space, but is requesting the refrigerated trucks so it can be ready.

“The state has requested that hospitals implement their emergency plans,” an Abrazo spokesperson told Fox 10. “Part of activating our plan includes the ability to handle overflow morgue capacity if needed.”

“Abrazo has taken a proactive approach by ordering refrigerated storage in the event it may be needed during a surge of COVID patients. At this point it is not needed.”

The Maricopa County Medical Examiner’s Office in Arizona has also put in a request for makeshift morgue trucks. Maricopa County is the center of the outbreak in the state at the moment.

“Our planners at Unified Command are moving toward acquiring coolers and staffing because Office of the Medical Examiner is currently near capacity for body storage. This is a situation that occurs almost every summer and is further complicated by the current pandemic,” the office said in a statement. 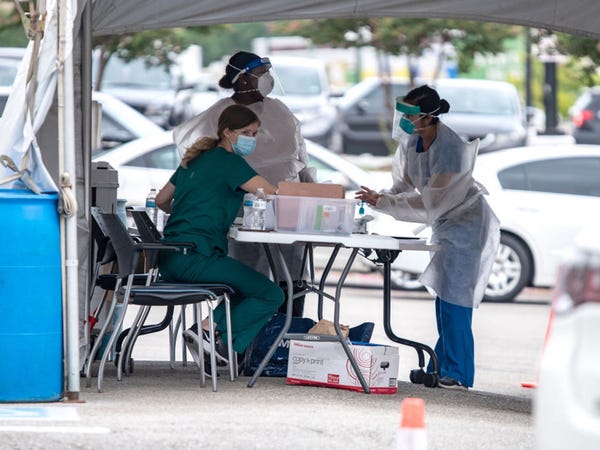 Medical personnel work at a COVID19 testing center on July 7, 2020 in Austin, Texas.

It’s a similar story in Texas, where several counties have requested refrigerated trucks.

The morgue in Nueces County, home to Corpus Christi, is already at capacity.

The county’s medical examiner, Dr. Adel Shaker, told The Texas Tribune that they actually got an extra morgue trailer at the beginning of the outbreak, but sent it to another city because they had so few cases.

But now they need the space.

Mayor Ron Nirenberg of San Antonio said Monday that refrigerated trucks are on the standby to help as morgues run out of space for bodies.

Dr. Ken Davis, the chief medical officer for CHRISTUS Health South Texas, told KSAT that the refrigerated trucks will help hold bodies at the hospital until the morgue or the funeral home can pick them up.