More than a million Americans filed for unemployment benefits last week, signaling that pandemic-induced layoffs remain elevated even with the US economy reopening.

US weekly jobless claims totaled 1.3 million in the week that ended Saturday, the Labor Department said Thursday. That came in lower than the consensus economist estimate of 1.38 million compiled by Bloomberg. 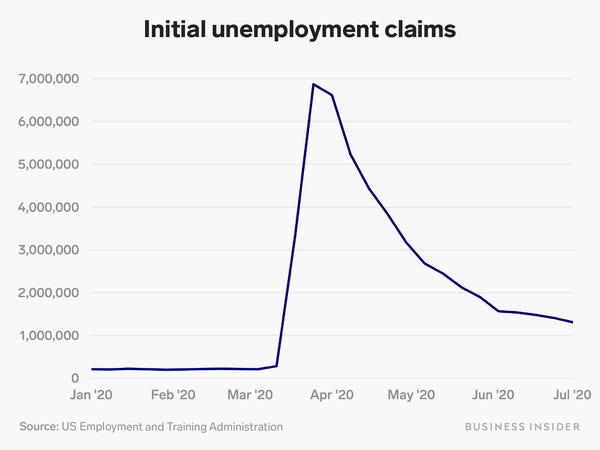 
Read more: Wall Street is being shaken to its core by a legion of Gen Z day-traders. From a casual hobbyist to a 20-year-old running a 14,000-person platform, meet the new generation of retail investors.

Continuing claims, which represent the aggregate total of people receiving unemployment benefits, came in at 18.1 million for the week that ended June 27, a decline from the prior period’s revised number.

Last week, the initial claims report coincided with the June nonfarm payrolls release, which showed the US economy added a record 4.8 million jobs during the month and that the unemployment rate declined to 11.1%.

Where the jobs report showed progress made as states across the US reopen and people go back to work, stubbornly high initial unemployment claims point to underlying weakness in the labor market. The US economy has still lost a net 14.7 million jobs since the pandemic began.

Read more: GOLDMAN SACHS: Wall Street is bracing for a historically wild stock market as the presidential election nears. Here’s a surprising yet simple strategy for protecting your portfolio — regardless of outcome.

Economists will continue to watch unemployment claims carefully to gauge how the labor market is being impacted by a recent spike in coronavirus cases. On Tuesday, the US reported 60,000 new COVID-19 cases, a record single-day spike, according to data tracked by Johns Hopkins University.

The growing number of cases has led some states to pause or roll back their reopening plans, which could cause further economic pain for workers and businesses. The longer the pandemic goes on, the more jobs could be on the chopping block — on Tuesday, United Airlines warned roughly 36,000 front-line employees about potential furloughs as travel demand remains depressed.

Read more: Buy these 15 stocks that are shielded from COVID-19 fallout and primed to beat the market even as virus cases spike, Evercore says