President Donald Trump has criticized Dr. Anthony Fauci and boasted about not listening to government experts while working out his response to the coronavirus.

In an interview with the former Fox News host Greta Van Susteren, the president said he disagreed with earlier comments from Fauci that the US was still “knee-deep in the first wave” of the coronavirus crisis.

The interview was for GrayTV, a US television network where Van Susteren is chief political analyst. It is due to be broadcast Sunday, but excerpts were published in advance by CBS News and The Guardian.

Fauci, the country’s top infectious-disease expert and a leading member of the White House coronavirus task force, on Monday described the state of the US outbreak as “really not good.”

The US recorded more than 50,000 new daily cases for the first time July 2, and it has done so again several times in the days since.

Trump, however, said “I think we’re in a good place,” adding that he disagreed with Fauci’s assessment of the situation, CBS reported.

“You know, Dr. Fauci said, ‘Don’t wear masks,’ and now he says, ‘Wear them,'” CBS reported the president as saying.

“And you know, he’s said numerous things: ‘Don’t close off China. Don’t ban China.’ And I did it anyway. I sort of didn’t listen to my experts and I banned China.” 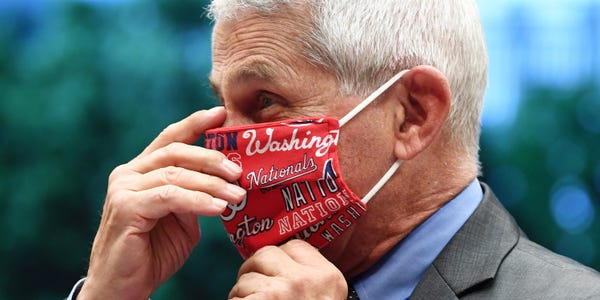 The China comment was in reference to an early response from the Trump administration barring all foreign nationals who had recently visited China from entering the US.

Trump also conceded that he would be “flexible” over the plan for the Republican National Convention to be held in Florida.

Organizers had moved the convention to Florida while the virus appeared to be under control and when social-distancing measures had been relaxed, The New York Times reported.

Read more: The race for coronavirus treatments and vaccines is heating up. Here are the 9 most important events to watch for in July, from new vaccine trials starting to the first sales of a COVID-19 drug.

The state is now experiencing a major surge in new cases, however, rising more than 30% in the past week, according to The Guardian.

Trump described this as “spiking up a little bit” and predicted the numbers would go down. He said, however: “We’re very flexible, we can do a lot of things.”

Hydroxychloroquine: When medicine and politics…

Hydroxychloroquine: Evidence suggests it is…