As US coronavirus cases have surged to record levels, a dark question hovers in the minds of public-health experts: When will deaths follow?

In the last two weeks, daily cases have risen by about 50% compared to the two weeks prior, with a peak of nearly 55,000 new cases on July 2. Meanwhile, deaths have declined a little, from around 690 per day in mid-June to around 560 per day over the last two weeks.

There are good reasons to think that the ratio of COVID-19 deaths to cases during this second surge won’t reach the same level that it hit in April. That’s primarily because increased testing is catching more mild cases, younger people make up a larger share of cases than they did previously, and hospitals and doctors are better informed and prepared now.

On the other hand, it could only be a matter of time before deaths spike again. Severe COVID-19 cases progress over several weeks, and case numbers only began to rise considerably a few weeks ago.

His model predicts that the US could see more than 200,000 coronavirus deaths by November 1, with deaths starting to climb dramatically in the fall. Recently, Arizona, Florida, and Texas have seen their daily death counts rise.

“No one wants to say too early that deaths are not rising,” Dr. Howard Koh, a professor at the Harvard TH Chan School of Public Health, told Business Insider. “That would really be a mistake.”

Koh, Vos, and other experts suggested a handful of reasons for why deaths have lagged so far. Here are the five main factors at play.

“Age is by far the strongest predictor of mortality,” he told Business Insider. Indeed, people over 65 represented about 80% of US coronavirus deaths for the month of June.

In Florida, the median age of coronavirus cases has dropped to 35, compared to 65 in March. Cases among people under 40 are also rising in Arizona, California, Minnesota, Ohio, South Carolina, and Texas. Since coronavirus cases in young people tend to be mild, many of those cases won’t prove fatal.

“We’re all speculating that after Memorial Day, it was really the younger people who perhaps reengaged with society too soon and without the proper precautions,” Koh said.

Older people or those with preexisting health conditions, meanwhile, are more likely to still be at home, given their vulnerability to severe infection.

“People over the age of 70 or 75, they’re avoiding most people, or they’re taking protective measures,” Klausner said. “Older people are saying, ‘Hey, you know, I’m not going to attend this family event,’ or, ‘I’m gonna keep my distance where it’s possible.'”

President Donald Trump has suggested that the skyrocketing case numbers are due solely to increased testing. Experts say that’s not the case — the virus is spreading rapidly in many states, most notably Arizona, California, Florida, and Texas.

But the US is testing far more now than it was a month or two ago. The country is testing 62 out of every 100,000 people — a lower rate per-capita than Russia, Iceland, and Australia, but a higher rate per capita than Italy and France. That could mean more mild cases are being diagnosed than they were at the start of the outbreak, when tests were reserved for people with severe infections.

As testing becomes more available, people may also be tested earlier in the course of their illness, leading them to seek treatment right away. That could save some lives. Most people, however, don’t show up to the hospital until their cases are already severe — around 10 or 11 days after symptoms start. 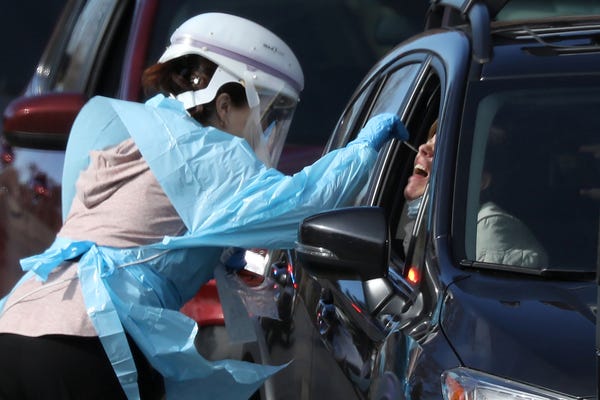 A healthcare worker tests people for the coronavirus at a drive-thru station run by the state health department in Denver, Colorado, on March 11, 2020.

Doctors are getting better at treating COVID-19 patients

A growing array of coronavirus research — paired with the development of new therapeutic agents — could also be preventing some deaths.

On top of that, doctors have become more savvy about how to treat critical cases.

For example, Koh said, physicians have discovered the benefits of proning: placing coronavirus patients on their stomachs instead of on their backs to improve oxygenation in the lungs. Doctors have also started to use ventilators more sparingly, or on settings with lower air pressure, to avoid damaging patients’ lungs even further.

But since there’s no slam-dunk treatment for the virus, many patients still face grim outcomes.

“There may be some effect of getting better at treating people,” Vos said. But he added that “things are trending towards much, much larger problems in Texas, Florida, Arizona, and a host of other states.”

Hospitals are more prepared for an influx of patients

Many states with rising case counts are seeing an influx of patients: Hospitalizations were rising in 23 states as of Sunday, according to data from The COVID Tracking Project.

More than 80% of Florida’s adult ICU beds were occupied on Tuesday, according to Florida’s Agency for Healthcare Administration. More than 50 Florida hospitals are reporting that their ICUs have reached max capacity, while another 30 say their ICUs are more than 90% full.

Hospitals in Houston, Texas — where coronavirus hospitalizations nearly quadrupled from Memorial Day to July 1 — have started transferring patients to other cities.

Still, many hospitals have had time to prepare for new arrivals. These preparations include adding more beds, hiring or transferring staff, and stocking up on personal protective equipment. Hospitals in the San Francisco Bay Area, for instance, prepared tents for coronavirus patients in March that went unused at the time but could reopen if necessary.

“We will be ready if a surge does come,” Dr. Mary Raven, chief of the University of California, San Francisco’s   Department of Emergency Medicine, told ABC7. 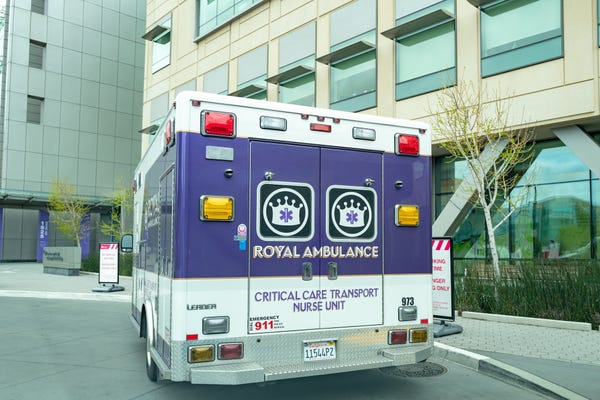 There’s a considerable lag time between cases and deaths

A highly plausible and very worrisome explanation for why deaths have stayed flat, however, is that more fatalities are coming soon.

“It’s a false narrative to take comfort in a lower rate of death,” Dr. Anthony Fauci, director of the National Institute of Allergy and Infectious Diseases, said during a Tuesday news conference.

Official case numbers generally reflect infections contracted about two to three weeks prior. On average, COVID-19 patients die around 18 to 19 days after first showing symptoms. After a patient dies, it can take several days for that death to be added to the official tally.

“Deaths are a lagging indicator,” Koh said. “If somebody is infected and then has the risk of getting sick and being hospitalized and dying — that whole trajectory takes a number of weeks, at least, maybe up to a month or more.”

Plus, since coronavirus cases are being detected much earlier in the course of an illness, there may be an even longer lag time than usual.

“When you start identifying people at earlier stages of a disease, it looks like they survive longer (or have the disease longer) compared to when you identify based on severe symptoms,” Eleanor Murray, an assistant epidemiology professor at Boston University School of Public Health, wrote on Twitter.

The unfortunate reality is that after new coronavirus cases are identified, some deaths are bound to follow.

“In places where cases are rising, hospitalizations are increasing, too,” Koh said. “We will inevitably see deaths coming in such situations, unfortunately.”

What was the impact of…