In February 2019, Shawn Bechtel was driving to Fort Collins, Colorado, to pick up a Tesla Model X that a prospective customer had kept overnight after a test drive.

That’s when Bechtel’s coworker read an announcement that Tesla had just published on its website. It said they might be out of a job.

“Over the next few months, we will be winding down many of our stores, with a small number of stores in high-traffic locations remaining as galleries, showcases, and Tesla information centers,” the message read.

The note was buried in a blog post announcing the availability of the long-promised $35,000 version of the Tesla Model 3 sedan.

Bechtel felt a combination of numbness and panic as he and his coworker wondered how the news would affect them. They frantically called and texted their manager and colleagues, only to learn that they, too, were baffled.

“Nobody knew what was going on,” Bechtel said.

There was confusion higher up the corporate ladder as well, according to a former regional sales manager who worked on the East Coast. He hadn’t been briefed on the announcement before it was published, so he texted his boss’ boss, but they had no answers.

Tesla had a tendency to reveal pricing changes to the public and its employees at the same time, the manager said, but the company had never made a surprise announcement this important.

About a week later, Tesla’s sales employees received an update: The company would not be closing most of its stores, but, after shuttering 10% of them, it would evaluate 20% of the remaining locations and eliminate the weakest, the update said.

The new announcement had a glaring omission, according to a former salesperson who worked on the West Coast: any acknowledgment of the stress Tesla had created for its sales team over the past 10 days.

“That, to me, was pretty cold-hearted,” he said.

In recent years, the faith of some of Tesla’s sales employees has been challenged, putting them at odds between the excitement of contributing to the world’s transition toward sustainable energy and a corporate culture that’s made instability a way of life.

Tesla did not respond to multiple requests for comment on this story.

Are you a current or former Tesla employee? Do you have an opinion about what it’s like to work there? Contact this reporter at mmatousek@businessinsider.com, on Signal at 646-768-4712, or via his encrypted email address mmatousek@protonmail.com.

A sense of purpose, at a price 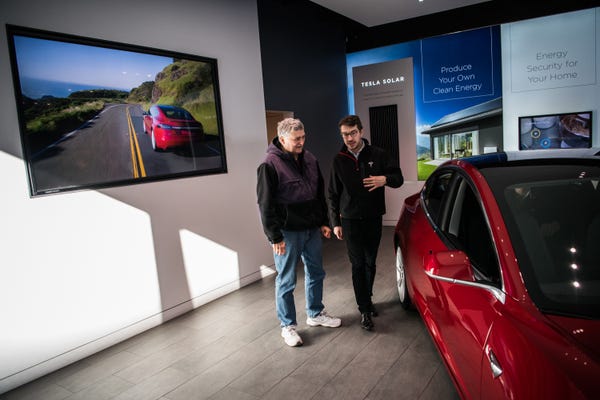 A Tesla salesperson in Washington, DC, in 2018.

“It was the most dismal week ever,” the former salesperson who worked on the West Coast said. “Everybody was depressed.”

Thinking they’d soon have to look for a new job, his colleagues and managers updated their LinkedIn profiles in their store’s back office, the former salesperson said. At another store on the West Coast, a manager offered to help her salespeople polish their résumés, a current salesperson said.

A few months later, he was rehired and back on cleaning duty within days. His store didn’t have mops, so he and his coworkers got on their hands and knees and polished its floor with microfiber towels meant for cars, he said.

Tesla is nearly 20 years old, and its guiding principles are clear: Wean the public off gas-powered vehicles, for the good of planet Earth. But the sense of purpose this mission imparts has a price, three former sales employees said.

“It’s a very mission-driven organization,” the former East Coast regional manager said. “That mission and its sustainability and viability took precedence over any and every other facet of the organization, including employee well-being.” 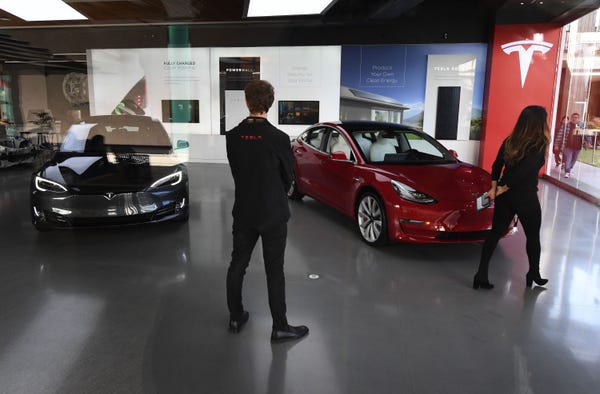 Teslas on sale at a shopping mall showroom in Los Angeles in 2019.

Earlier this year, that dynamic frustrated four salespeople who said their stores remained open while the coronavirus spread rapidly in the US. Tesla hasn’t disclosed the number of stores it temporarily closed in response to COVID-19, which had infected 44,000 people and killed 550 people nationwide by the time the company paused operations at its car factory in Fremont, California.

But the four salespeople said their locations were still open in mid-March, and three of them said their stores lacked essential supplies, such as hand sanitizer, gloves, and wipes.

The level of preparedness at Tesla’s stores was uneven. One current salesperson who works in the South praised his location’s response, saying it quickly enacted social-distancing procedures, went the extra mile in cleaning vehicles, and had a healthy stock of soap, hand sanitizer, and wipes.

Tesla’s CEO, Elon Musk, told all his employees they could stay home if they were sick or concerned about the coronavirus without fear of punishment; but three salespeople who took Musk up on that offer said they still worried about the consequences of remaining at home for too long. Tesla had, in January 2019, laid off 7% of its employees, six months after cutting 9% of its workforce.

“We feel like there’s an ax over our head every day at Tesla,” the current salesperson who works on the West Coast said. “They lay off with no notice. They’re just notorious for that.”

By April, staying home was no longer a choice for many salespeople. CNBC reported that about half of Tesla’s sales and delivery employees were put on furlough amid temporary company-wide pay cuts that followed an industry-wide disruption to vehicle sales and production.

Tesla’s inventory levels rose from 11 days’ to 20 days’ worth of supply between the end of December and the end of March, while overall new-car sales in the US had dropped by 41% in March 2020, compared with March 2019, according to JD Power.

Tesla did not respond to several requests for comment about when it started to bring sales and delivery employees back from furlough and whether any of them were still on unpaid leave.

As sales have risen, pay has declined 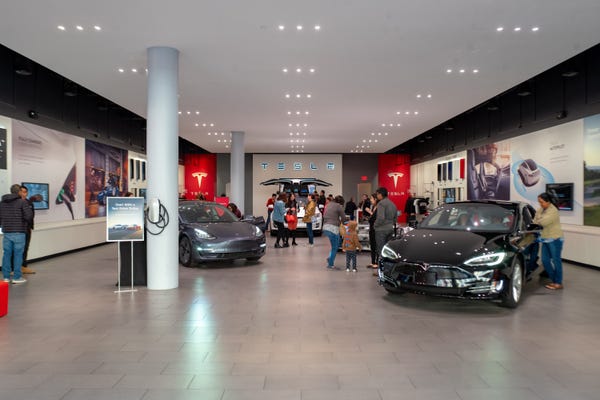 Pay cuts were not a new phenomenon for Tesla salespeople. Employees described a dizzying array of compensation changes over the past years as commissions and bonuses were removed and reconfigured. Those changes tended to point in one direction — down — even as the company’s sales repeatedly hit record highs.

Last October, commissions were eliminated, a move offset by an increase in base pay. But, according to an online petition posted in January by one salesperson, the increase in their hourly rate was not enough to make up for the loss of commissions. Four other salespeople, all of whom still work for Tesla, said their overall pay fell after October.

A salesperson who works in the Midwest said Tesla has “a general attitude that you can do whatever to people’s compensation, and they’ll just stick around because they love the company. I think that’s starting to wear on a lot of people.”

Tesla’s financial condition and share price have improved over time, but the electric-car maker has never made an annual profit. Building electric cars is a complicated and expensive undertaking that’s put all but a few companies that have tried it out of business.

And Tesla has come close to going broke on several occasions — as recently as 2018. At times the company has had little choice but to aggressively cut costs.

“It is extremely important that we examine every expenditure at Tesla no matter how small, and be sure that it is critical,” Musk said in a 2019 email to Tesla employees. “This is hardcore, but it is the only way for Tesla to become financially sustainable and succeed in our goal of helping make the world environmentally sustainable.” 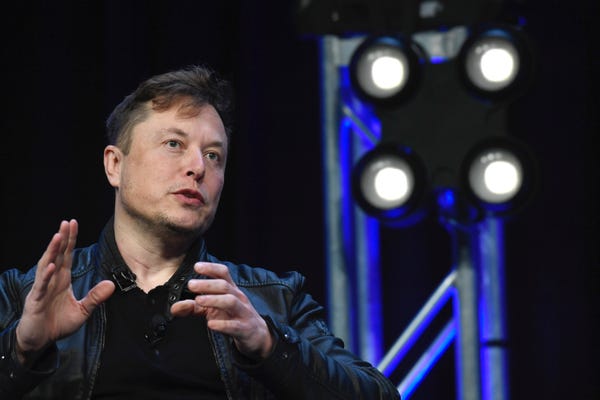 For all the frustrations Tesla salespeople described, many lauded the company’s efforts to promote sustainable energy and transportation.

“The company is changing the world,” said a current salesperson who works on the East Coast.

That enthusiasm is not just a matter of training or professional convenience. Five current and former salespeople said they own a Tesla vehicle, and all gave them positive or even glowing reviews.

The current salesperson who works on the East Coast owns a Model 3 and said the difference between a Tesla and its competitors resembles that between a flying car from “The Jetsons” and the foot-powered vehicles from “The Flintstones.”

Tesla’s salespeople aren’t alone in praising the company’s vehicles. In Consumer Reports surveys, for example, Tesla owners have repeatedly expressed higher rates of satisfaction than those of any other automotive brand.

Since 2018, Tesla has made the buying process easier, including merging its energy and car sales teams into one unit and making salespeople more involved in deliveries. The company has also simplified ordering a car online, said Gene Munster, of Loup Ventures, who writes research notes about Tesla. “In retail, you want to make it as easy as possible, and I think that they’ve done that,” he said.

Tesla’s approach to selling vehicles has come to resemble a traditional retail store more than a car dealership, said the former East Coast regional manager. In a retail store, employees are incentivized to make sure each shopper has the best possible experience, rather than focusing more narrowly on the number of sales they make on a given day, he said.

“That’s a much more holistic approach to the Tesla customer and to the experience for the customer than just ‘Did we sell the car and did we get them out the door?'” the former East Coast regional manager said. 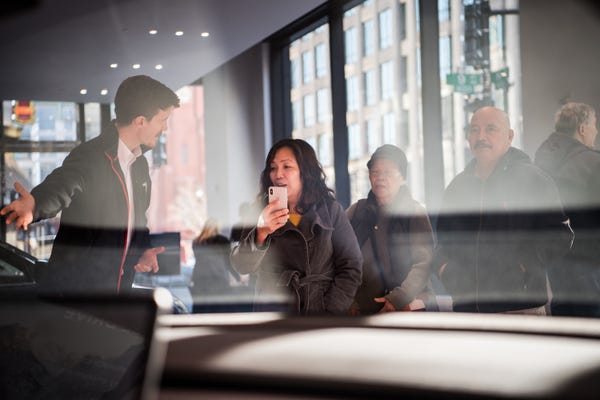 A shopper makes her way to sit in a Tesla Model 3 in 2018 at the Tesla store in Washington, DC.

The salesperson from the southern US previously worked for Ford and Lincoln dealerships, and said Tesla is more customer-oriented. There’s less pressure to make sales at Tesla, he said, and more of an emphasis on building relationships with shoppers.

That sentiment aligns with a philosophy Musk has described multiple times: Tesla customers should not feel like they’re at a traditional car dealership, haggling with pushy salespeople.

A salesperson can recognize that a customer who comes to their store to test-drive a Model 3, which starts at $38,000, would be happier with a Model S sedan, which starts at $75,000 and generates higher profits for Tesla, a former regional manager who worked in the northern US and left the company in 2019 said.

And customers respond to the interpersonal skills a salesperson can offer, like the ability to build a rapport with their family members, said a former salesperson who worked in the Midwest and left Tesla in 2019.

For one current salesperson who works part-time in the eastern US, their experience at Tesla has revealed a gap between the company’s ideals and the way it treats employees. In the months after commissions were eliminated, the salesperson said they had to stop buying contact lenses and new clothes, start taking the bus to work on days they couldn’t afford gas, and begin using a food bank.

The salesperson was anxious and embarrassed the first time they visited the food bank, an experience heightened by an interaction they described with a woman who worked there. The woman noticed the salesperson’s Tesla jacket and said her parents own three of the company’s vehicles. “You must own a Tesla,” the woman said.

The salesperson has been looking for other jobs, they say, but has struggled to find one that would match even the reduced pay Tesla now offers. Part of what has kept them at the company is also the hope that it may one day provide the opportunities for growth touted when they first joined it, like the ability to move between departments.

For now, they say, the salesperson is hoping the company will fulfill its promise, made over a year ago, to expand their part-time position into a full-time one.

“What Tesla could be and what Tesla says it is, is an amazing thing,” the salesperson said. “I just need it to hold up to those standards.”