While the US sets new records for single-day coronavirus cases, employers are increasingly grappling with strategies — or sometimes a lack thereof — for how to get their workers tested.

Most are requiring face masks, rejiggering their sites to accommodate social distancing, and doing temperature checks, but 56% haven’t decided if they’ll require testing for on-site workers, according to a poll of 40 manufacturers, tech firms, municipalities, retailers, and educators by Pacific Business Group on Health, a nonprofit coalition of large employers like American Airlines, Microsoft, Tesla, and Stanford University.

Business Insider reached out to 16 of the world’s largest employers to see if they’re tackling workplace testing. Three said they had no plans to test employees yet, while two said they were actively figuring out how to do it. Companies that make coronavirus tests are doing some workplace testing: Abbott Laboratories said it was testing some workers regularly, while Roche said it’s providing tests to volunteers.

Some organizations want frequent testing, but are shocked by the sticker price; others don’t think it’s necessary or don’t know how to implement it, employers, testing executives, and a health benefits group told Business Insider.

That spells trouble for the 45% of American employees who aren’t working from home full-time — or folks gearing up to return to offices, shops, and other sites. Meanwhile, temperature checks may be commonplace, but they can’t always prevent transmission from the majority of coronavirus-positive people with mild symptoms, or none at all.

“I think there’s a little bit of wait-and-see going on,” said Dr. Rajaie Batniji, a cofounder and chief health officer at Collective Health, a startup that focuses on employer-provided health insurance. Collective Health works with employers like Uber, Palantir, and Pinterest, and in May launched a testing program that’s drawn particular interest from retail, tech, and manufacturing companies.

Lab giants Quest Diagnostics and LabCorp as well as AMN Healthcare, a staffing agency, are also running testing programs ⁠— but they can be costly. Without working with a test provider, access to test sites can vary by geography.

Batniji said that temperature checks don’t work, and there’s a clear scientific consensus that testing, including for people without symptoms, is necessary to reduce the risk of transmission. That’s because people with coronavirus can be notified of their status before they infect others.

Employers — especially those with office workers — aren’t exactly sure what to do with that information as far as who to test, how often, where to get tests, and how to monitor those results without breaking privacy laws, he said. It’s leading to some companies delaying bringing their employees back to the office altogether.

Read more: Companies are scrambling to figure out how to get employees back to the office safely. One of Silicon Valley’s favorite healthcare startups thinks it has the solution.

From financial services to retail to tech, it seems that few large companies — not to mention smaller ones with fewer resources and more vulnerable populations — have formal plans to test all workers at regular intervals so far, though many are discussing them.

Nationally, four in 10 workers say their employers aren’t screening for coronavirus symptoms, while roughly a third say their companies have most or all workers on-site as of May 31, according to a recent Gallup poll of about 1,900 people. Nearly half are worried about being exposed to coronavirus at work, and only a quarter “strongly agree” that they can return to work sites safely, the poll found. 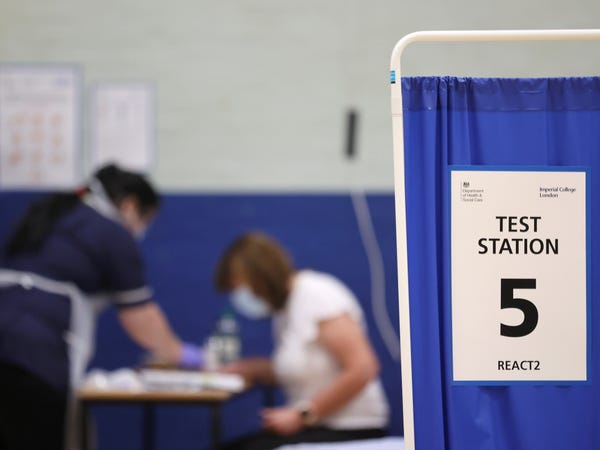 A sign is seen during a clinical trial of tests for coronavirus antibodies in Keele, Britain, on June 30, 2020.

As Goldman Sachs weighs reopening, it’s focusing on measures for physical distancing, temperature scans, mask requirements in common areas, and a limit on the number of people who can use the elevators at the same time, a spokesperson told Business Insider. The company will have maximum 50% capacity in the office for a while, as one example.

The financial services giant is discussing the use of virus and antibody testing, but hasn’t made formal plans to implement it yet, Goldman said.

“We don’t know exactly yet how it’s going to shape up, but we continue to believe it’s worth trying,” the spokesperson said over email.

Read more: Here are 3 reasons that Amazon’s $1 billion effort to test every employee for the coronavirus could be a game changer, according to Morgan Stanley.

The majority of workers in Target’s headquarters will stay remote, either full-time or combined with going into the office, for the rest of 2020, a spokesperson said. Other safety measures include many of the same cleaning and distancing measures, but they’ll also encourage employees to do daily self-exams, according to the company.

Healthcare companies are grappling with how to test workers, too.

Healthcare giant Siemens Healthineers is still working out its testing strategy, the company told Business Insider. Roche, a $300 billion pharma and diagnostics company, is giving employees tests for coronavirus antibodies on a voluntary basis. UnitedHealth Group, which operates health plans through its insurance arm UnitedHealthcare, wouldn’t say if it had plans to test workers regularly.

Abbott, a healthcare company and coronavirus test-maker, said it’s directing kits to frontline healthcare workers, first responders, and the broader community, but is testing employees at some manufacturing facilities who’re directly involved in making those products. 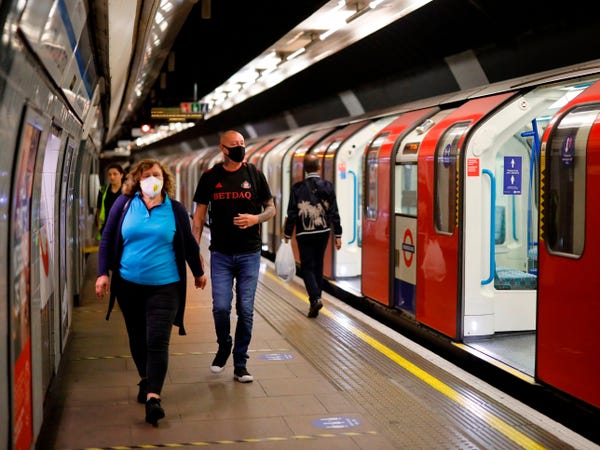 Commuters wear face masks as they travel in London on June 12, 2020, as lockdown measures are eased.

Companies are under pressure, economically and socially, to return to some degree of normalcy, but the recent surge in cases has helped them see the need for consistent surveillance, Caroline Savello, the chief commercial officer at Color, a testing startup, told Business Insider.

The company’s seen a spike in demand over the past couple of weeks, especially from smaller companies and schools in the sunbelt states and others where the virus is running rampant, but testing access is limited, Savello said.

Color works with Salesforce, Visa, Levi’s, and a number of large groups around the country. It recently launched a testing program for employers, where it flies coronavirus tests to its lab in California and texts people about results.

“Spikes in cases is demonstrating that not only is this not going away, but many states and most employers don’t have the appropriate infrastructure in place to manage outbreaks, and particularly given what we’re seeing with asymptomatic spread,” Savello said. 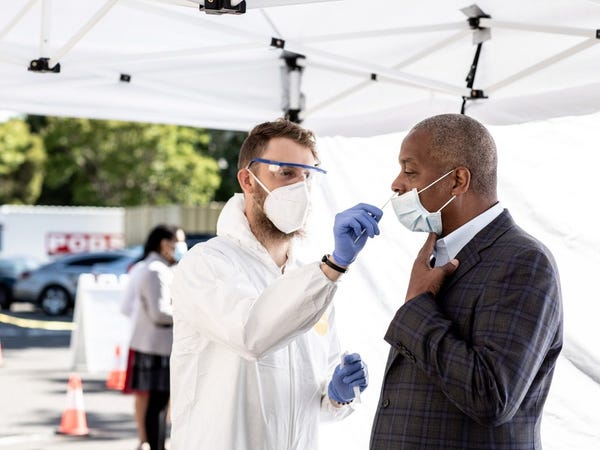 Someone receives a swab for coronavirus at the West Oakland Health Center, one of the sites run by Color.

To be sure, regularly testing workers for coronavirus poses logistical and financial challenges. Virus testing can cost $150 per kit; for a company with 100,000 workers, that’s $15 million just for one round of tests. There’s also the issue of arranging tests, while access to labs can vary depending on location.

“The payers are not taking the role that I think they need to to ensure that we stem this pandemic,” she said. “You can’t just limit testing to people who present with symptoms in a health clinic.”

Read more: Nursing homes reveal a $25 billion conundrum: No one wants to pay for the millions of coronavirus tests required to reopen the country.