In recent months, China has developed a new hardline style of diplomacy in an effort to appeal to its audience at home and advance its interests abroad — but it might not be working as it hoped.

This new diplomacy consists mainly of Chinese officials issuing hawkish, painfully direct, and sometimes-untrue statements in an attempt to rally people around the Communist Party and undermine critics abroad.

It is nicknamed “wolf warrior” diplomacy, a reference to a popular Chinese movie franchise about a Chinese soldier who fights and defeats foreign mercenaries. 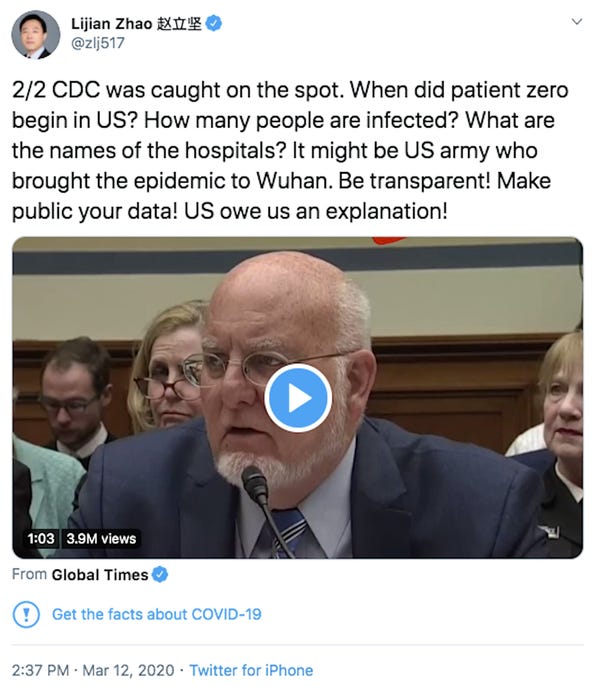 A tweet by Chinese Foreign Ministry spokesman Zhao Lijian on March 12, 2020. Twitter put a fact-check tag on it.

In recent weeks, they have launched baseless conspiracy theories and mocked countries over their reactions to crises like the coronavirus pandemic and the Black Lives Matter movement.

Their forthrightness has courted significant blowback both abroad and back home.

In March, as tensions between the US and China continued to mount over the origins of COVID-19, Zhao tweeted a conspiracy theory.

And as Black Lives Matter protests swept the US, Hua also ramped up her attacks on America’s leadership.

In late May, Hua responded to the US State Department’s support for Hong Kong protesters by tweeting: “I can’t breathe” — an attempt to divert US criticism of China to crises on American soil.

And in June, shortly after President Donald Trump signed a bill to sanction China over its oppression of Uighur Muslims, Hua tweeted: “The US should enact an African American Human Rights Policy Act instead.” 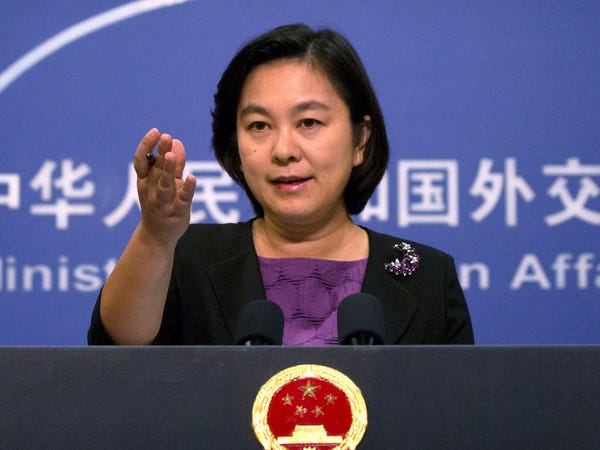 This brash form of diplomacy is seen more and more outside China too.

In April, as France’s coronavirus cases were peaking, China’s embassy in Paris published an article alleging that nursing staff at French retirement homes had “abandoned their posts overnight, deserted collectively, leaving their pensioners to die of hunger and illness.”

The claim was inflammatory and groundless. China later claimed it was based on a misunderstanding and deleted the post from the embassy’s site — though you can see an archived copy here.

An earlier wolf warrior move was in January 2019, when China’s ambassador to Canada accused the country of “white supremacy” over its detention of Huawei CFO Meng Wanzhou, who was arrested over claims that she violated US sanctions on Iran. 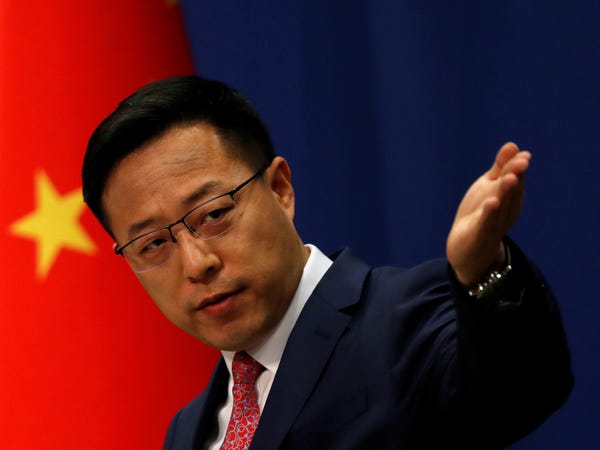 It’s clear that this kind of attack is becoming increasingly valued in China.

Zhao’s history of attacking the US on social media — which once prompted former National Security Advisor Susan Rice to call him a “racist disgrace” — earned him a rapid promotion from China’s deputy chief of mission in Pakistan to deputy director-general of the Chinese Foreign Ministry’s information arm in Beijing late last year.

Lu was also appointed Chinese ambassador to France in late 2019, in what experts said was a stamp of approval.

A new form of statecraft

Wolf warrior statecraft is the total opposite of the type of diplomacy China has been practiced for decades: that of keeping a low profile and working behind the scenes.

This principle was enshrined in the 1980s by then-leader Deng Xiaoping, who said: “Hide your strength, bide your time, never take the lead.”

But Beijing now finds itself at the center of foreign criticism, as countries — particularly the US — increasingly view it as a hostile force.

China’s inadequate early response to the coronavirus pandemic, its mass oppression of Uighurs, and suspicion of Huawei’s 5G infrastructure have been particular sources of tension.

Under this kind of fire, the wolf warriors’ attacks help China assert its narrative abroad, as well as rebut efforts to embarrass Beijing.

One unnamed diplomat singled out the US, telling Reuters: “Why can the Americans criticize us constantly, and we can’t scold the US?”

‘No longer a reactive player on the world stage’

Allen Carlson, director of Cornell University’s China and Asia Pacific Studies program, told Business Insider: “They are demonstrating to the global audience that China is no longer a reactive player on the world stage, it intends to be proactive, and more direct in achieving what are viewed as the country’s core national interests.”

The mission to undermine adversaries abroad may also explain why so many wolf warriors use Twitter, despite the platform being banned in China.

“It is more than a bit ironic that this social media platform which is banned within China has become a vehicle,” Carlson said.

Twitter is likely used to “spread word of their combative approach to diplomacy to the global audience, especially, perhaps to the Chinese diaspora, but, most likely also to Twitter users in Hong Kong and Taiwan,” he said.

There have been other signs that Xi is slowly reversing China’s low profile in the world. In October 2017, he told a national congress: “It is time for us to take center stage in the world and to make a greater contribution to humankind.” 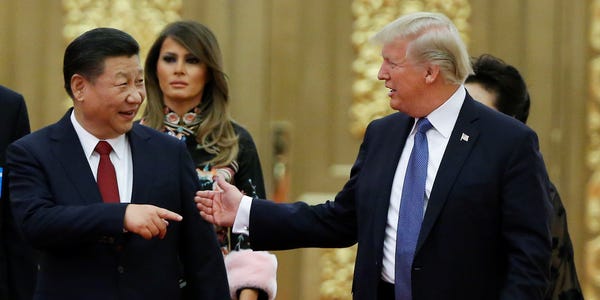 Chinese President Xi Jinping and US President Donald Trump in Beijing in November 2017.

Wolf warrior diplomacy also aims to score political points and stoke patriotism among its own citizens — both those living at home and abroad.

Carlson said: “China has more power on the world stage than at any point before in its modern history. Xi is now experimenting with how to make use of such expanded capabilities.

“At the same time … he has created expectations within China that the country is already well along the path to national rejuvenation.”

Moreover, Carlson said, the Communist Party is “appealing to nationalists within China, whose views of the world have been framed by decades of state emphasis on patriotism and nationalism, and, who have come to expect, even demand, that their country do more to stand up to perceived slights and insults.”

Uniting foes instead of subduing them

But there are increasing signs that wolf warrior diplomacy is uniting China’s allies against it, rather than scaring them off.

As Beijing’s diplomats grow in aggression, western countries are banding together to curb China’s rise. 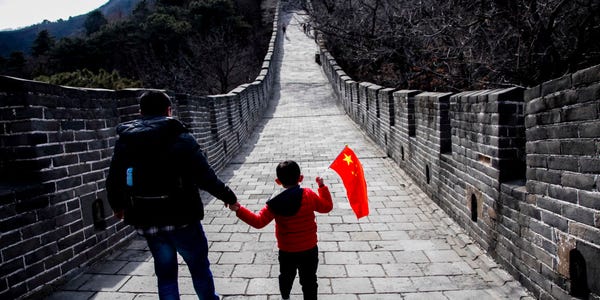 Is it even working at home?

When Zhao arrived at China’s foreign ministry from his posting in Pakistan, a group of “young admirers” had gathered at his office to celebrate his return, Reuters reported.

He also appears to have a fan base among normal citizens, with people on microblogging site Weibo defending him, wishing “Zhao uncle” good night, and saying that they look at photos of him de-stress.

(Though Weibo is the most popular social platform in China, it’s not a perfect representation of the Chinese population as it is heavily censored.)

At the same time, some older members of the Chinese diplomatic elite seem to be bristling at this new form of statecraft.

In a rare interview last month, China’s ambassador to the US shot down Zhao’s claim the US army had created the coronavirus, saying “such speculation will help nobody.”

Cui Tiankai told Axios: “Eventually, we must have an answer to where the virus originally came. But this is a job for the scientists to do, not for diplomats, not for journalists to speculate, because such speculation will help nobody.” (He did, however, stop short of criticizing Zhao directly.)

Others are said to doubt the efficacy of the new hardline approach in private as well.

“The wolf warrior turn has not been universally embraced within Chinese foreign policy circles,” Carlson said. “It has been the subject of intense debate, although most of the discussion has not been aired in public circles.”

He added that “a number of leading figures within the Chinese foreign policy establishment” have warned of the “potentially counterproductive nature of wolf diplomacy,” saying this form of statecraft may end up jeopardizing China’s quest to be a great world power instead of enabling it.

Richard McGregor, a senior fellow at the Lowy Institute and Chinese Communist Party expert, told CNN in May: “There’s clearly a split about how China should conduct its diplomacy. It might only be a tactical split, but at the moment, the ‘wolves’ seem to have the ascendancy.”

“I’m not sure that will last.”

US General confident Iraqis will…

The Bank of England is…

South Korea says it will…

China cracks down on new…

The Queen celebrated her 94th…

The Chinese Communist Party has…

Global GDP could plummet by…

Europe Racked by Riots and…