It’s the second weekend of May and Berlin is in full swing. Public parks are covered in picnic blankets and sunbathing locals, and the city’s much-loved beer gardens are buzzing with people as they gather to drink and socialize in the hot afternoon sun.

Sebastian Wenz, an accountant who lives in the capital, is also there, watching nearby television screens in anticipation as his home soccer team, Hertha BSC, returns to action for the first time since the coronavirus outbreak.

“You wouldn’t think that just seven weeks ago, Germany was going through a deadly pandemic,” Wenz told Business Insider.

Eight weeks from the height of its coronavirus outbreak, Europe’s most populous nation has emerged relatively unscathed compared to the rest of the world.

Germany’s successful response to the coronavirus is attributed to key factors including an early lockdown, an extensive testing program, and a functioning healthcare system, Business Insider previously reported.

To date, the country has seen more than 183,000 confirmed coronavirus cases, but only 8,594 deaths. To put this into perspective, New York City alone, which has a tenth of Germany’s population, has around double that death toll. 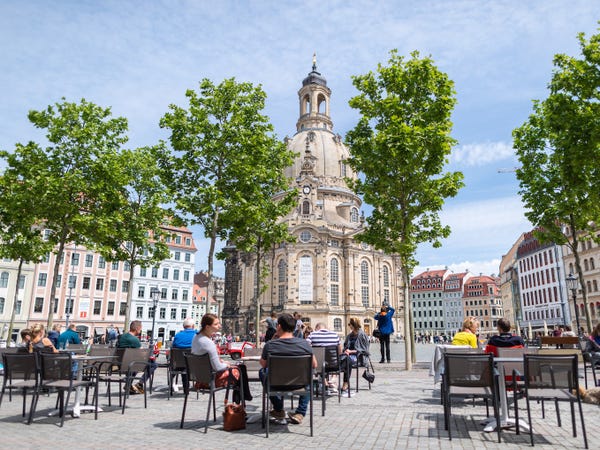 Guests sit at tables of restaurants on the Neumarkt in front of the Frauenkirche in Dresden on May 22, 2020.

Unlike other European countries, including Spain or the United Kingdom, Germany managed to maintain its low death rate while still keeping lockdown measures relatively relaxed.

Each of its 16 federal states implemented their own sets of lockdown rules, which varied in severity. But generally, people were permitted to leave their homes as often as they wanted, provided they respected social-distancing measures. Local state governments still banned public gatherings and closed schools, workplaces, and non-essential shops, but continued to stress that it was not a complete “shutdown.”

Now, as the country reopens and life slowly returns to normal, Germans reflected on how they think the country performed in the face of the pandemic.

“In March it all happened very quickly, from one day to the next. But then it also ended really quickly and now we’re just trying to get back to normal,” said Wenz.

The 35-year-old and his family are slipping back into their old routines. His 11-year-old son is back in school, his wife is working in the office three times a week, and he recently enjoyed a weekend excursion to a museum with his in-laws.

“I’m a very rational person, so I stayed calm throughout, although I think that’s also because in general, the government seemed to have things under control,” he added. 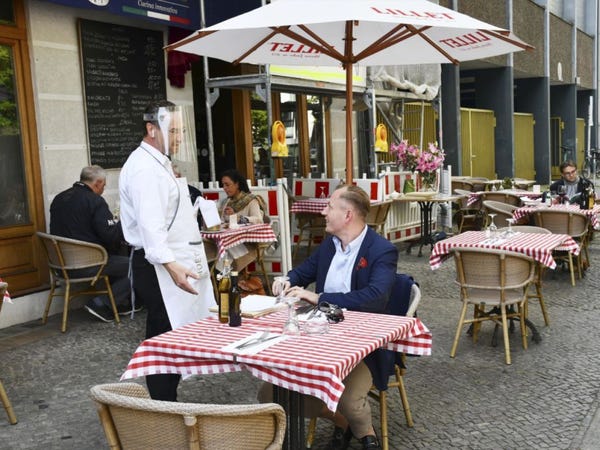 An employee wearing a face shield chats with a customer at his cafe in Berlin on May 15, 2020.

Wenz is not the only one who feels this way.

Sarah Reitz, a 29-year-old management consultant, who also works in the German capital, told Business Insider that the country’s success was based upon clear and rational messaging people received from the government.

“Their overall strategy was to say: ‘These are the rules, please stick to them. But also just consider what your needs are and that there are others more vulnerable than you. Use your common sense.’ I really appreciated that because it didn’t feel too restrictive but was clear at the same time,” she said.

Reitz also believes the government prevented a worse outbreak by going into lockdown relatively early, although notes that this wasn’t an opinion shared by everyone. The nationwide lockdown was issued on March 22, although several states, including Bavaria, closed down earlier.

“We have local governments who were doing their own thing. I think that was actually really effective,” said Reitz.

But while the states gained praise during the pandemic, a lot of Germans acknowledged the deft national leadership of Chancellor Angela Merkel.

Georgiana Ci, 28, who is originally from Romania but lives in Berlin, said: “I felt safe that I am in Germany. I felt safe every time Merkel was speaking on television.”

“I thought she made sense. I was listening to her German interviews which I usually wouldn’t do. I at least felt that if something happens to me, that I would be taken care of,” Ci added. 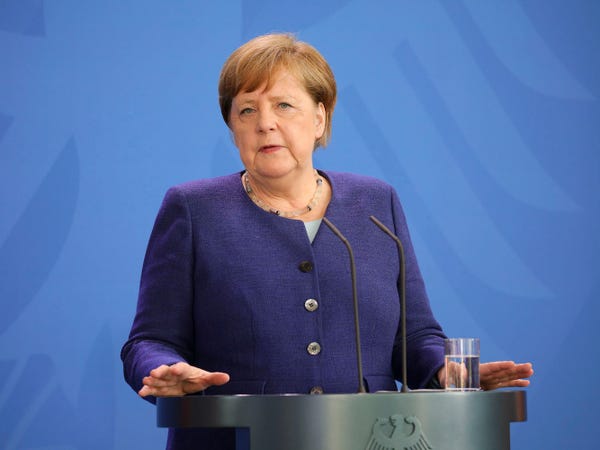 German Chancellor Angela Merkel holds a press conference at the Chancellery on May 20, 2020 in Berlin.

During the crisis, Merkel gained international recognition for being level-headed. As a former research scientist with a doctorate in quantum chemistry, the German chancellor was often seen on television breaking down statistics, explaining why certain measures were taken, and calling for national unity.

One video which showed Merkel describing the scientific basis behind her lockdown strategy during a press conference on April 16, was shared thousands of times on social media.

The chancellor has been rewarded with her highest approval ratings since July 2017, according to a poll cited in Deutsche Welle. Her party, the Christian Democratic Union Party (CDU), shared the success, with their approval rating up 5% from last month.

Every single person Business Insider spoke to also said they were incredibly impressed by and grateful for Germany’s healthcare system. For many, it is the crucial factor in blunting the impact of the coronavirus.

Dagmar, 61, a relaxation therapist from Hennef, a city just outside Bonn, said: “I was positively surprised by our healthcare system. It is strong and functions well. It’s something Germans can do very well.”

Tamara Goldfarb, 25, a medical student who lives in Nürnberg, agreed.

“I don’t think we should underestimate how rich and resourceful Germany is,” Goldfarb said.

The 25-year-old adds that her mother, who works in a lab in a hospital in nearby Bamberg, hasn’t been very busy for weeks.

“The big state hospitals prepared themselves so much. Thousands of operations were canceled, they set aside space for coronavirus patients, and things were fully prepared for a medical emergency. But until now, there hasn’t been one,” she said. 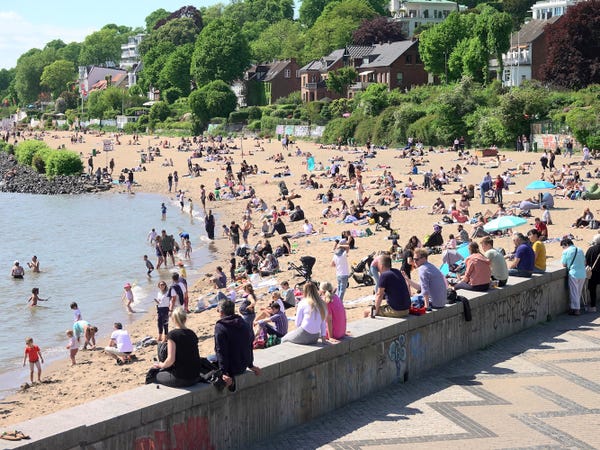 Germany’s spending on healthcare per capita is among the highest in the world and it has the second most critical-care beds per capita in Europe, Business Insider reported.

From the very beginning, the country took the threat of COVID-19 seriously. By the time it recorded its first coronavirus case in February, laboratories across the country had built up a stock of test kits, The New York Times reported. In the same week, a national crisis team was formed and ICU capacity increased by 12,000 to 40,000 beds.

On April 26, the country’s lead epidemiologist, Christian Drosten told The Guardian: “We are seeing half-empty ICUs in Germany. This is because we started diagnostics early and on a broad scale, and we stopped the epidemic — that is, we brought the reproduction number below 1.”

Germany’s rigorous testing system garnered praise from around the world. With a population of around 83 million, the country can perform up to one million diagnostic COVID-19 tests a day.

“We trust our healthcare system. So if I feel horrible and my doctor tells me to stay at home, I’m going to stay home,” said Goldfarb.

The medical student’s view reflects a cultural norm that also played an important role in the country’s success: Germans listen to the rules. 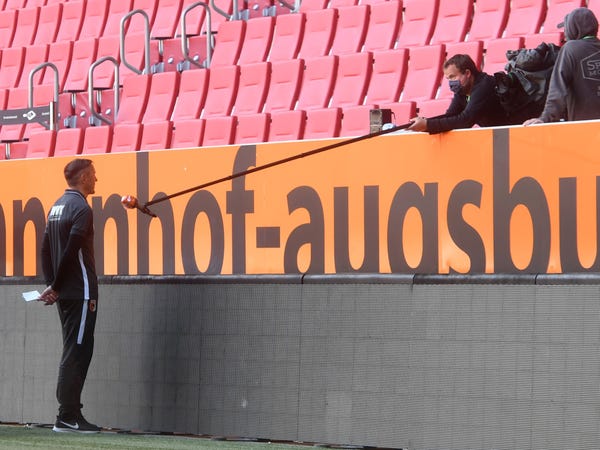 Augsburg’s assistant coach Tobias Zellner gives an interview after the German first division Bundesliga football match on May 16, 2020 in Augsburg.

Matthias Veith, 31, who works in insurance in Düsseldorf, said: “Maybe this is a more cultural thing, but when there is a rule, Germans follow it. This might be a stereotype, but it’s really true.”

“During the lockdown, it worked. Even now, it works. When you go to the shop, everyone is wearing a mask and following the rules,” he added.

Veith recalls how at the peak of the pandemic, the city was deserted despite relatively relaxed lockdown restrictions.

“There was a time when that attitude almost backfired, because people who should have gone to the hospital for other reasons, didn’t show up because they knew the priority was for coronavirus patients,” Veith said.

But as Germany has seen a decline in cases, people are not afraid to reenter society.

Bettina von Hengstenberg, 72, who lives in Hamburg, says that even elderly people are starting to socialize again, although they remain cautious.

“I’m not scared to leave the house anymore, but I think that’s because the numbers in Hamburg are so low. And I know I will be okay because I follow the rules. I have a mask, I keep my distance, and I have my hand sanitizer with me at all times,” she said.

“I asked my neighbor for four weeks to go to the supermarket for me. But after four weeks, I put my mask on and said: ‘Right, I’m going to go now because I can no longer be afraid,” von Hengstenberg added. 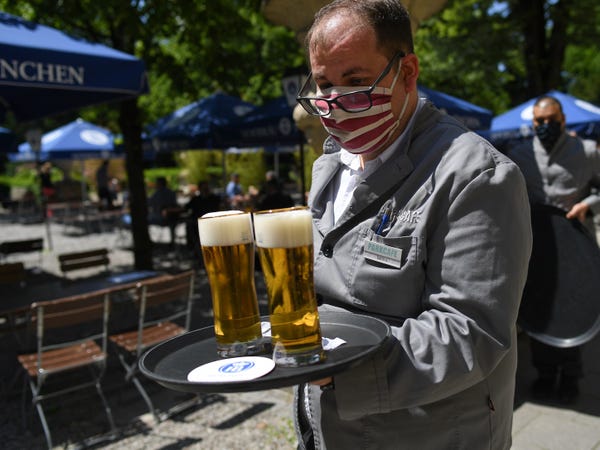 The one thing that does worry Germans, however, is the economy. By mid-May, the coronavirus had pushed Germany into a recession, following the sharpest economic slump since the 2008 financial crisis, the BBC reported.

“The German economy has been tip-toeing on the edge of recession since the beginning of 2019, but it can hide no longer,” said Claus Vistesen, chief eurozone economist at Pantheon Macroeconomics.”[It] entered a technical recession at the start of the year, and this before the incoming collapse.”

But while most people Business Insider spoke to support the reopening of the country, some were wary it was premature and could trigger a second wave of infection.

Sebastian Mihãilã, 27, who lives in Berlin, said: “I totally disagree with opening bars and pubs. I don’t mind at all if there are five people in the park who are sitting in a circle, 2-meters apart, and just talk.”

But I do mind when I see these kinds of gatherings in front of a bar where people also get drunk and within two hours are all over each other, dancing and hugging. It’s pointless,” he added. 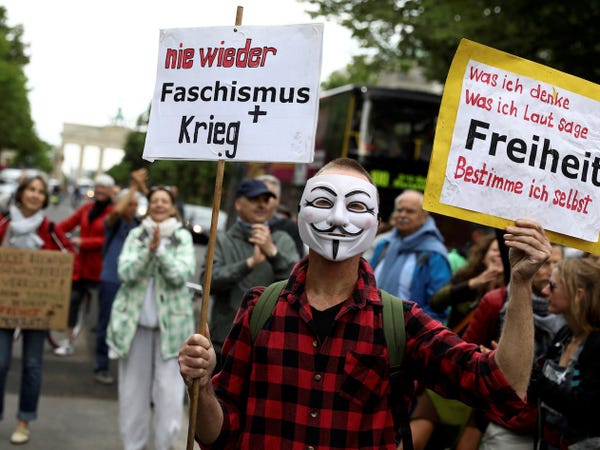 A demonstrator wearing a mask holds up signs during a protest against the government’s restrictions, in Berlin on May 23, 2020.

Stephan Brunnhuber, 29, who works in IT in Munich, recently returned to the city after waiting out the pandemic with his parents in the countryside. The southern state recorded the first coronavirus case in the country and, unlike other places, had a much stricter lockdown.

“I think it’s good that we’re reopening but in other cases, I think it’s still too soon. For example, in Bavaria, they reopened the beer garden before kindergarten. I think sometimes it makes sense but in this case, it doesn’t. Their priorities are wrong,” he said.

The resumption of the Bundesliga, Germany’s soccer league, on May 16, also sparked a lot of debate in the country.

“The other leagues and seasons have been canceled. Why them? It’s so risky,” Brunnhuber said.

While there was widespread acceptance of a lockdown, some Germans also felt that the country overreacted. In the last few weeks, the country has seen an increase in anti-lockdown protests, which have unexpectedly become the forefront of a global anti-vaxxer movement.

“The protests are embarrassing. I feel angry when I see them because the only thing we are expected to do is to watch out for each other. It makes me wonder where the normal people are in the world,” said Goldfarb, the medical student from Nürnberg.

Since the peak of the outbreak, the country has had a lot of time to reflect. Although it has been praised for its efficient coronavirus response, the experience has still left a significant impact on people’s lives. They are increasingly aware that things won’t go back to normal — at least for a while.

Goldfarb reflected: “I think there’s a big chance in this whole situation to evaluate our lives, so I do think things will change a little bit, and I hope that we won’t just go back to normal because that would mean we learned nothing from this.”

Iran Threatens Attack on US…

Almost Half of French Would…

Thousands Upon Thousands Rally Against…

Putin Warns Other Nations Not…