Twitter has hidden one of President Donald Trump’s tweets behind a warning that it violates the platform’s rules on “glorifying violence,” a move that comes hours after he signed an executive order targeting Twitter and Facebook.

Twitter slapped a warning label to a tweet by President Trump that appeared to threaten protesters in Minneapolis.

The tweet in question was about the riots in Minneapolis over the death of George Floyd. Protests, which began Tuesday seeking criminal charges for the police officers involved in Floyd’s arrest, erupted into confrontations with the police that on Thursday caused a police station to be set on fire. Floyd, a 46-year-old black man, died Monday after a white police officer pinned him to the ground by the neck for several minutes, prompting national outrage.

Trump wrote late on Thursday in response to the escalating violence: “These THUGS are dishonoring the memory of George Floyd, and I won’t let that happen. Just spoke to Governor Tim Walz and told him that the Military is with him all the way. Any difficulty and we will assume control but, when the looting starts, the shooting starts. Thank you!” 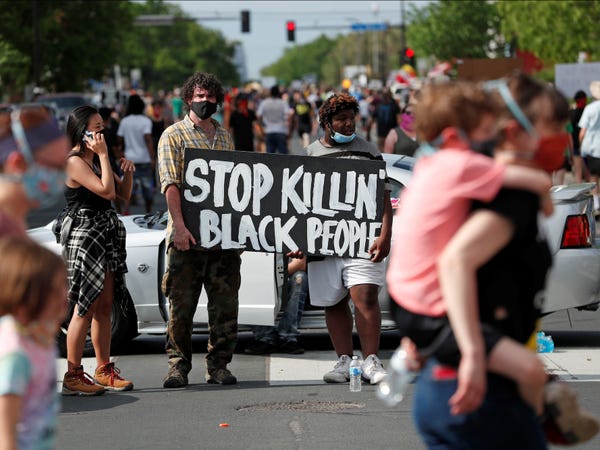 Protesters at the scene where George Floyd was pinned down by a police officer kneeling on his neck before dying in Minneapolis.

Explaining its actions early Friday, Twitter said in a statement posted to its platform: “This Tweet violates our policies regarding the glorification of violence based on the historical context of the last line, its connection to violence, and the risk it could inspire similar actions today.”

The company added: “We’ve taken action in the interest of preventing others from being inspired to commit violent acts, but have kept the Tweet on Twitter because it is important that the public still be able to see the Tweet given its relevance to ongoing matters of public importance.”

Trump has been at loggerheads with Twitter all week.

On Tuesday, Twitter added fact-checking links to two of Trump’s tweets that claimed mail-in voting in California would be “substantially fraudulent.” 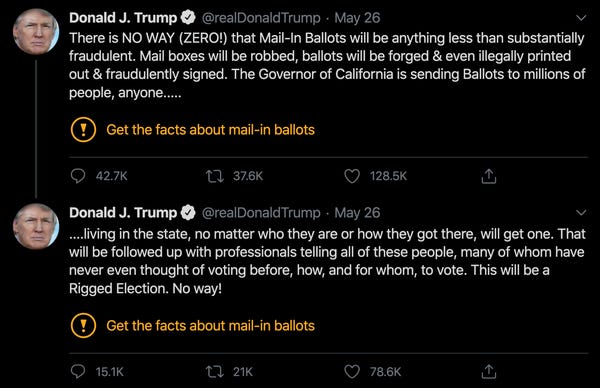 
Trump responded furiously, saying Republicans felt censored by social media. “We will strongly regulate, or close them down, before we can ever allow this to happen,” the president tweeted.

The order is intended to give federal regulators the power to amend Section 230 of the Communications Decency Act — a section of US law that gives social-media companies power to moderate their platforms while also protecting them from being liable for the content they host.

Trump’s order threatens to strip companies of that protection if they discriminate against users in any way.

Rioters Burn Down Wendy’s In…