In the hours after Monday’s Memorial Day holiday, President Donald Trump’s top White House adviser executed a DC-style coup that would have made the swampiest Washington veterans proud.

The move by Jared Kushner, which was approved by the president, placed Bill Stepien as the campaign’s new de facto campaign manager while letting Brad Parscale keep the title too.

It’s a shake-up that capped two months of sliding in the polls for Trump that culminated in a rocky few weeks, which ended with Trump blasting Parscale in a meeting last week, asking why he was losing to “Sleepy Joe” Biden, according to seven Trump advisers and Republicans close to the 2020 reelection campaign interviewed by Insider.

Parscale and the Trump campaign disputed that Parscale was being demoted. “It’s a solidification of Brad’s leadership,” Tim Murtaugh, the Trump campaign communications director, said. He said Stepien would report directly to Parscale. And one Republican close to both Parscale and other factions in the White House and the campaign said Stepien would take on more power and responsibilities but wouldn’t supplant Parscale.

“It was about moving to the next phase,” a senior Trump administration official said, adding that Stepien “has been involved from the beginning, but we are going from planning phase to an execution phase.”

Other Trump advisers, who spoke on condition of anonymity to speak freely about the state of the campaign, said Parscale had been slipping for months and that the final straw came on Thursday in a White House meeting with the state directors for two critical battleground states — Arizona and Florida — that polls show Trump is losing in to the former Democratic vice president.

“How are we losing to Sleepy Joe?” Trump asked, according to one person with direct knowledge of the meeting.

Five days later, after the holiday weekend and the start of the next leg of the 2020 showdown, the Trump campaign announced Stepien would move on to the campaign full time as a “deputy campaign manager.”

The 2020 makeover is hardly as dramatic as some of the early battles from the 2016 race, when Trump cycled through senior aides, including several campaign managers. It’s also not as dramatic as Trump’s first two years in the White House.

But Trump insiders say the changes, which the campaign announced were effective “immediately” in a press release, still carry the hallmarks of the president’s raucous management style — and the underlying worries among Republicans that he may get crushed in November.

“Trump never fires people,” one Trump adviser said. “He works around them.”

A promotion for the 42-year-old Stepien, a veteran political operative who managed both of Chris Christie’s successful New Jersey gubernatorial races, answers concerns that have been mounting for months across the GOP spectrum that Parscale and Kushner were outmatched running the president’s campaign.

But some Trump advisers said they still felt even that was not enough. They said Stepien’s ascendance gave Kushner, the president’s son-in-law and arguably the most important staffer on the entire 2020 effort, almost singular control over the 2020 reelection campaign.

Trump advisers and Republicans supporting the campaign have been skittish about Trump’s reelection chances since the coronavirus pandemic shut down the country. Trump heading into March faced a divided Democratic Party that seemed just as likely to elect a Democratic socialist as it was to elect another New York billionaire. And Trump enjoyed fairly stable — if not soaring — support in critical battleground states.

But the past three months have upended even the best-made campaign plans.

Republicans acknowledged the worst public-health crisis in a century caught Trump and the White House flat-footed — thousands of people died each day from COVID-19, while the nation’s unemployment figures soared by the millions each week as the nation rushed to stem further sickness and deaths. And the Democrats united around Biden.

Trump lost ground to the presumptive Democratic nominee in the must-win states of Pennsylvania and Michigan, but as the pandemic dragged on — and Trump made wild pronouncements, like suggesting that injections of disinfectants may stave off the virus — he began losing support in Florida and Arizona, two states where Republican said they felt they had comfortable leads going into November.

With alarm bells going off in the Trump campaign, the president last week directed the state directors for Florida and Arizona to fly to Washington to meet with him and other top brass at the White House and describe why he was losing in their states, according to Republicans familiar with the meeting. The presentation focused heavily on the numbers of calls to voters and prospective Trump campaign supporters made by the campaign but missed critical points on voter demographics and the key question of why Trump was losing in a pair of states that he won in 2016 and still have GOP governors, they said. 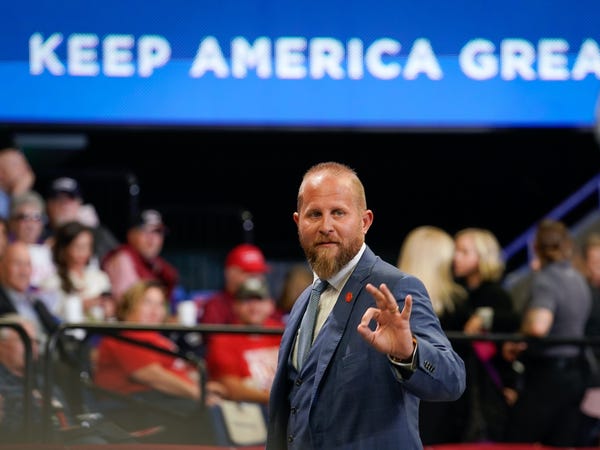 Kushner had been supporting Parscale’s running of the show, forming an iron-grip duopoly that reported directly to the president — and kept many outside advisers out. But that grip loosened and ultimately faltered over the past two weeks, and Kushner decided to elevate Stepien, one Trump adviser said.

“Stepien is Kushner’s guy,” said a veteran of Trump’s 2016 campaign who remains dialed in with the current operation but is not working on the reelection.

“Brad never claimed to be the political operative,” a second Trump adviser added. “Brad doesn’t have the time to run everything.”

Among Republicans and across Trump world’s many factions, Stepien is widely respected and also noted for his political-data and analytics capabilities. He cut his teeth on the national level working for the 2008 presidential campaign of Rudy Giuliani, the former New York mayor who works as a personal lawyer to Trump and remains close to the president.

Republicans who spoke with Insider repeatedly said Stepien was a good tactician at running numbers in battleground states and seeing how to move voters to the polls. That’s a very different skill set than Parscale, a Kansas native who earned his entry into the Trump campaign by designing websites for the president’s business and during the 2016 presidential race focused more on digital marketing and social media.

“Stepien is great — very talented, so it’s a really good move to give him more operational control to support the campaign,” Mike DuHaime, a longtime Stepien friend and veteran Republican operative, said. “This is not a shake-up, but post-Memorial Day is a typical time to strengthen all elements of the campaign. I had long thought that his role would grow as we got closer to election day.”

Stepien, who supporters describe as a veteran operative who is generally quiet in person, declined to comment for this story.

One thing almost everyone except Parscale stalwarts seemed to agree on: Regardless of the titles used, Stepien is now steering the Trump campaign.

A Successful Recall of California…

Eric Swalwell who was compromised…

McConnell will not reconvene Senate…

Trump Gets Around Twitter’s Ban…

President Trump: I Will Not…

Biden Has Finally Announced His…