The owner of a bar at Lake of the Ozarks has defended his decision to host a crowded pool party over the Memorial Day weekend, despite an intense social media backlash.

The videos of the party, and similar events from nearby venues, attracted damning comments as they were shared thousands on times on Twitter. Meanwhile the death toll from the coronavirus in the US edged closer to 100,000.

Here is an example of one scene from the bar:

Dr. Sam Page, the St. Louis County executive, condemned the behavior in a statement Monday and several public health departments in the area have recommended self-isolation for all attendees, according to The Kansas City Star.

But the owner of Backwater Jack’s defended his actions and said he did take some precautions.

Gary Prewitt issued a statement on Facebook on Tuesday standing up for the event, called “Zero Ducks Given.” He emphasized that social distancing is not a legal requirement, and said “no laws were broken.”

Missouri health authority guidelines — as well as national guidelines from the CDC — advise but do not enforce social distancing.

Prewitt cited advice from the local Sheriff’s department, which said: “Social distancing is not a crime and therefore the sheriff’s office has no authority to enforce actions in that regard.”

The advice said that people must make a “conscious decision” to come and that it was each person’s “right and responsibility” to take on the risks of attending.

Additionally, he said medical staff had been hired to perform no-contact temperature checks on attendees, and those with a temperature of over 100.4 degrees Fahrenheit were turned away.

“This upset many customers,” he added. 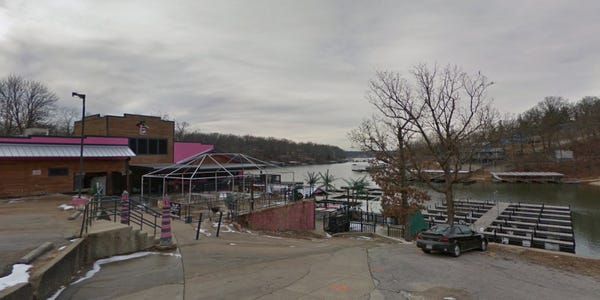 A view of Backwater Jack’s bar at Lake of the Ozarks, Missouri, during low season in December 2016

Hand sanitizer was also given to all attendees, he said, and staff had been told they could decline to work at the event with “no negative consequences.”

He said the annual party has always been called “Zero Ducks Given,” a name that has “absolutely nothing to do with the pandemic situation.”

“We understand that there are many emotions and feelings involved on every side of the pandemic situation,” he wrote.

Prior to the event, Prewitt was among several bar owners who were interviewed by local TV about their preparations for Memorial Day weekend in the pandemic.

He told 41 Action News that the bar would be making efforts to limit groups to 10 people — though these planned efforts were not mentioned in his later Facebook defense.

“We don’t know who’s in groups, who’s in families. We expect them to [practice social distancing] on their own,” he said. “We won’t let large groups gather over 10, or at least try not to, and speak to them to try and spread out a little bit more.”

The US is currently reporting the highest numbers of cases in the world from the coronavirus, with more than 1.6 million recorded cases. Missouri has recorded 693 deaths, a relatively small proportion of the US total.

US will restart visa services,…

Grandson of Elvis Presley has…

DeVos vows to have schools…

Tree in Maryland falls on…

Trump got angry at Russia…