A black man who filmed a viral video of a white woman calling the police on him New York’s Central Park after he asked her to put her dog on a leash said he is “uncomfortable” with the backlash against her that led to her losing her job.

Video footage filmed by Christian Cooper shows the woman, Amy Cooper, saying that she would call the police to report an “African American man threatening my life.” (It is a coincidence that the two have the same surname.)

She did so, and police came, though they took no action.

The video, shared on Twitter by Christian’s brother, Melody Cooper, has almost 39 million views as of early on Wednesday morning.

And outrage over the video led to her being fired from global investment firm Franklin Templeton and allegations that she was choking her dog, which she then “voluntarily surrendered” to an animal rescue.

You can watch the video here:

But in an interview with The New York Times, Christian Cooper said he was taken aback by the reaction to Amy Cooper and thinks its not the appropriate reaction to try and address the root of such incidents.

“It’s a little bit of a frenzy, and I am uncomfortable with that,” he said.

“If our goal is to change the underlying factors, I am not sure that this young woman having her life completely torn apart serves that goal.”

Cooper had previously spoken to NBC New York, where he said he had decided to keep filming as he refused to be intimidated, and noted racism in American society.

“We live in an age of Ahmaud Arbery where black men are gunned down because of assumptions people make about black men, black people, and I’m just not going to participate in that.”

In the video, he encouraged her when she suggested calling the police. He told NBC that he kept filming because “I am not going to participate in my own dehumanization.”

“I am not going to feed into this.”

Cooper had been bird watching and asked the woman to put her dog on a leash, as is required in a protected area of the park. The dog remains off its leash for the duration of the video.

Both parties said that Cooper had tried to give the dog a treat. Amy Cooper said she felt “threatened” and that she “overreacted.”

Amy Cooper did not respond to The New York Times’s request for comment. 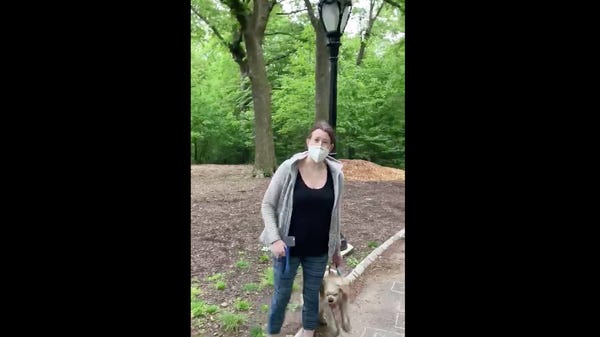 A still from the video showing Amy Cooper in Central Park.

But she told NBC New York on Monday that she “humbly and fully apologizes to everyone who’s seen that video.”

She also said that she has realized that different groups of people can be treated differently by the police.

“When I think about the police, I’m such a blessed person,” she said. “I’ve come to realize especially today that I think of [the police] as a protection agency, and unfortunately, this has caused me to realize that there are so many people in this country that don’t have that luxury.”

And she later told CNN: “I’m not a racist. I did not mean to harm that man in any way.”

She added that she wanted to “publicly apologize to everyone.”