Trucking companies ordered the lowest number of truck trailers on record in April, according to freight forecasting firm FTR.

Trailer orders are highly seasonal. In April, US retailers and manufacturers typically order around 20,000 trailers, according to an average of April FTR data from 2013 to 2019. They forecast what goods they will need to move in the coming weeks or months, and order new trailers accordingly.

In April 2020, though, executives ordered a meager 300 new trailers.

Trucking manufacturers require up to several months to deliver equipment, so trailer orders reveal what business leaders believe the consumer and industrial economy will look like months from now. Trucks move some 71% of all US freight tonnage every year.

And the fact that retailers and manufacturers estimate that they’ll need 98% fewer trailers than they needed last year shows the belief that the coronavirus-induced recession isn’t going away anytime soon — even though state restrictions on businesses across the US are lifting.

“Fleets remain in a severe wait-and-see posture until they can evaluate the damage done to the freight markets from the pandemic,” Don Ake, FTR vice president of commercial vehicles, said in a press release. “Since the recovery from the economic crisis is highly dependent on the status of the health crisis, there is a huge amount of uncertainty in the trailer market.” 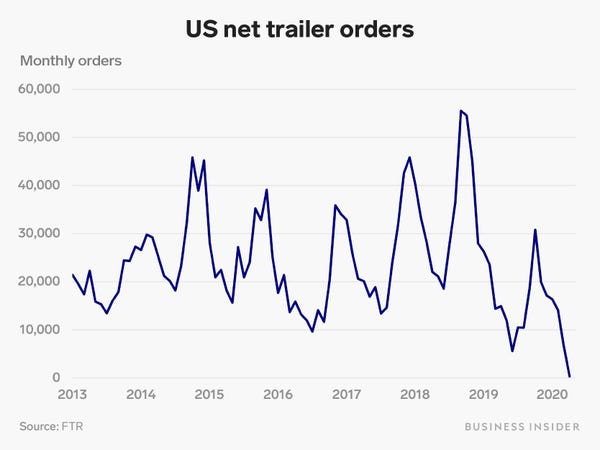 
The trucking industry entered a recession in late 2018, spurred partially by the US-China trade war, which caused manufacturing levels to plummet. Scores of truck drivers entered the market in 2018 as well, leading to an oversupply of labor as the loads needing to move sank.

The coronavirus, which has shuttered factories and rendered millions of Americans jobless, is exacerbating the trucking recession, called a “bloodbath” by some truckers. Cass Information Systems said April freight volumes hit levels not seen since 2009, obliterating take-home pay for drivers.

Trucking is often looked at as a leading indicator of where the rest of the economy is headed. As 71% of America’s freight is moved on trucks, companies foreseeing the need for fewer trucks or trailers is typically an omen of an economic downturn: If manufacturers are producing less and people are buying less, there’s less of a need to move goods.

“Because trucking participates in all phases of manufacturing, it increases as manufacturing starts to ramp up, giving it leading indication on economic growth,” Steve Tam, the vice president of ACT Research, previously told Business Insider.

When the rest of America is headed for a downturn, freight usually dips first, per a 2019 report from Convoy’s economic-research division. The industry went into a recession in April 2006, more than a year before the rest of the economy was clobbered by the Great Recession of 2008.

America’s 1.8 million truck drivers can’t work from home and often lack health insurance — and that may stymie the fight against coronavirus