Latest News
Home /Unemployment surged to 14.7% in April as the US lost a record 20.5 million jobs – Business Insider

The coronavirus pandemic led to record jobs lost in April and sent the unemployment rate to its highest reading in nearly a century.

Employers cut 20.5 million payrolls in April, marking the largest-ever one-month contraction, the Bureau of Labor Statistics said on Friday. That’s roughly 25 times the worst monthly decline seen during the last recession, from 2007 to 2009. It also dwarfs the record set in 1945, around the end of World War II.

Meanwhile, the unemployment rate surged to 14.7%. That’s the highest since the Great Depression of the 1930s, according to Labor Department data dating back to the 1940s and National Bureau of Economic Research figures before that.

Two months ago, in February, the unemployment rate was 3.5%, a roughly 50-year low.

The dismal report showed just how rapidly the coronavirus pandemic devastated the labor market and pushed the US economy into a recession as states closed nonessential businesses, sent workers home, and told people to practice social distancing to curb the spread of COVID-19.

“The number of workers who swiftly lost work in April is beyond belief,” said Nick Bunker, an economist at Indeed. “With today’s report, the full scope and scale of the current labor market crisis is only now coming into focus.” 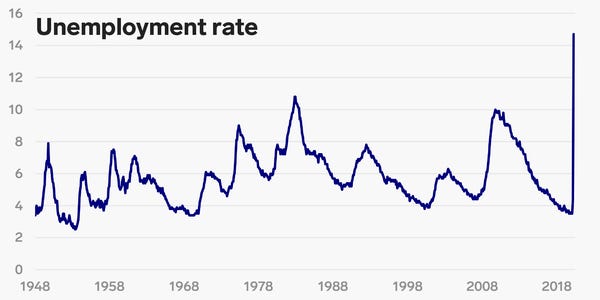 
Read more: An investor who oversees $300 billion at T. Rowe Price says stocks are in a ‘pseudo-bullish rally’ — and shares 4 tips for making money during the slow recovery ahead

The labor force participation rate fell to 60.2% in April, the lowest since January 1973, and the employment-to-population ratio dropped to 51.3%, the lowest ever and the largest one-month decline.

Among specific industries, leisure and hospitality were the hardest hit, with payrolls falling by 7.7 million, or 47%, concentrated mostly in food services and drinking places. Education and health-services employment fell by 2.5 million in April, and retail trade jobs fell by 2.1 million.

The manufacturing and other services industries shed more than 1 million jobs, while government, construction, and transportation and warehousing each lost nearly 1 million jobs.

Efforts to boost the economy

Amid the sudden downturn, the government has gone to tremendous lengths to curb the economic fallout of the shutdowns. At the end of March, President Donald Trump signed the $2 trillion Cares Act into law, expanding unemployment benefits, sending direct checks to Americans, extending aid to beleaguered industries, and giving loans to small businesses to protect payrolls.

However, the Paycheck Protection Program had problems with applications and ran out of $350 billion of funding in just two weeks. An additional $320 billion was later sent to the program.

The Federal Reserve has also gone beyond what it deployed during the last recession, allocating trillions of dollars to help state and local governments and businesses across the country. The central bank has vowed to continue to do whatever it takes to protect the economy.

Despite these immense efforts, the labor market has still taken an extreme hit amid staggering layoffs and vastly reduced hiring. In the seven weeks since massive coronavirus-induced layoffs began, more than 33 million Americans have filed for unemployment insurance, and about 25% of all job postings have evaporated, according to Glassdoor data. 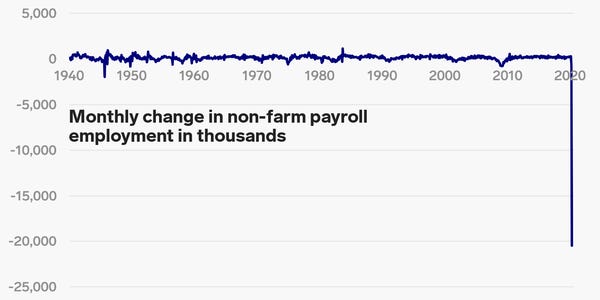 
Jeff Crivello, the CEO of BBQ Holdings, the parent company of Famous Dave’s, told Business Insider that he had to make the “heartbreaking” decision to furlough 2,700 employees, roughly 85% of the staff, in mid-March.

“We believe that was the only solution to keep the company solvent,” he said. He’s hopeful that the company will be able to bring back as many of those workers as possible as the economy slowly opens up, but he said some Famous Dave’s locations would be closed permanently.

That will leave some workers on the sidelines in a rapid shift.

“Going into the pandemic, the restaurant industry was way understaffed,” Crivello said. “If you talked to any restaurateur, they would tell you their one problem was finding labor. And within 24 hours, it became way overstaffed.”

Actual unemployment is likely much higher than the print

Even though some industries are still hiring, such as grocery stores and warehouses, the health crisis has kept some would-be job seekers on the sidelines.

“I don’t think many people want to try to find a new job during a pandemic,” Bunker said.

It’s also difficult to make plans when there’s still such widespread uncertainty. Colin Gold, a carpenter who makes sets for shows in New York, said he had contemplated pivoting some of his skills just in case live theater doesn’t come roaring back. He began filing for unemployment in late March but hasn’t applied to any other jobs or looked for other work.

“For the past month I’ve more or less been dealing with my own anxiety,” he said. “I haven’t quite launched into preparing for the future.”

Other measures of unemployment that might paint a more comprehensive picture, including the U-6 reading, which counts discouraged workers who have stopped looking for a job and part-time workers seeking full-time employment.

During the Great Recession, economists focused on this measure because of its wider definition of unemployment, said Ryan Sweet, a senior economist at Moody’s Analytics. He estimated that U-6 could reach 25% to 30% in the next few months.

“But there are going to be some people that don’t fall into any of the categories that will be captured by U-6, even though they’re technically unemployed,” he said.

As the economy reopens, people will begin going back to work. But will it ever be the same?

There are people who are ready to go back to work. As states’ economies slowly reopen, businesses should bring workers back and hopefully resume hiring, bringing even more people back into the labor market.

Cliff Rankin, a mechanic with nearly three decades of experience who’s managing a fleet of shuttle buses for Fast Park, an airport parking service in Austin, Texas, had his weekly hours reduced to 10 from 40 after nonessential travel was banned and Fast Park’s revenue plummeted, the company told Business Insider.

He now works one day a week and has been able to collect unemployment benefits under the expanded offerings from the Cares Act — his employer and other similar companies have not been eligible to apply for federal aid such as the Paycheck Protection Program.

Read more: ‘Beware of the oddity’: A Wall Street firm studied every market crash over the last 150 years to reveal how abnormal this one is — and concluded that stocks are doomed for another fall

While he’s enjoying the break, he misses work.

“It’s strange,” Rankin said. “I’m ready to get back to my buses and take care of my babies.”

Still, reopening the economy is likely to be slow and careful, and there’s a lot of uncertainty about when the US will return to normal — or whether returning to a pre-coronavirus world is even possible.

The longer that Americans go without paychecks, the less likely they are to spend. While there is certainly pent-up demand for things such as haircuts and manicures, it’s unclear how long it will take for people to feel comfortable going to a movie theater or sporting event.

“What’s more concerning is that this is not a temporary spike,” Lindsey Piegza, the chief economist at Stifel, told Business Insider. “It’s likely that we remain elevated at 9% to 10% through the end of the year.”

The coronavirus pandemic has brought change to the labor market that could be permanent, Piegza said.

“There’s a lot of structural adjustments that are going to be made in the coming year, and that is going to keep a lot of pressure on that, on the labor market,” she said.