Amazon’s playbook in transportation has always been to work with partners and then mimic their services in-house — usually for much cheaper.

Now, Amazon’s partners in air cargo are experiencing that. The company is now directly employing gate assistants at its airports in Dallas, Los Angeles, Chicago, and Hebron, Kentucky, according to job postings and LinkedIn profiles of Amazon employees. Gate assistants load goods on aircraft, as well as move, label, measure, and generally handle orders that are set to fly to your local airport.

This in-sourcing is already slicing away at the bottom line of Air Transport Services Group, or ATSG, which Amazon has partnered with since 2015.

Amazon has relied on outside cargo carriers to move your Prime orders for years — Atlas Air, ATSG, and, most recently, Sun Country. These companies provide Amazon with its air fleet, and staff the jets with pilots and mechanics. They also insure all 40 of Amazon’s planes.

More than ever, this cargo partnership is a boon for these companies. As airports report passenger traffic drops by up to 90% amid the coronavirus pandemic, many airlines are looking to moving packages as a way to stay solvent.

Sun Country Airlines CEO Jude Bricker told Business Insider’s Tom Pallini in a recent interview that the move to partner with Amazon late last year will likely allow the airline to survive through the pandemic, which has already spurred the bankruptcies of several long-time airlines.

With Amazon in-housing gate assistants, the bottom lines of those companies are now threatened. ATSG said in its most recent earnings statement that it flew 31% more in the first three months of 2020 than the same period of 2019 — primarily thanks to Amazon, which supports nearly a third of ATSG’s revenue.

However, its pre-tax earnings in its “Other Activities” segment, which includes maintenance and ground services, plummeted from nearly $2 million last year to $53,000 this year. That’s because of Amazon’s moves to in-house gateway services. 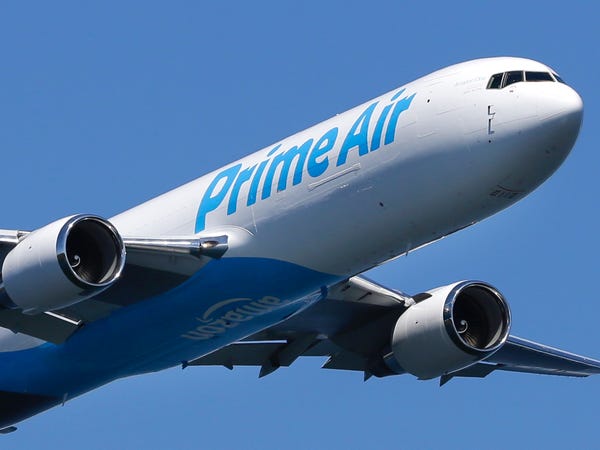 
“The lower margins reflect Amazon’s decisions to in-source some of the gateway services that our logistics services unit had performed for them in the prior year,” ATSG president Rich Corrado said in a May 6 call to investors.

Representatives from ATSG did not respond to a request for comment. Business Insider asked Atlas and Sun Country if Amazon’s in-sourcing impacted them as well, but they did not respond either.

“Amazon is always evaluating our operations to better serve our customers,” an Amazon spokesperson told Business Insider. “We are excited to grow our direct employee base at a number of Amazon Air operations across the country.”

Truckers can guarantee that airlines should watch out

Amazon has signaled its interest to become a logistics giant. In the span of several years, the retail giant has amassed dozens of cargo jets, about 20,000 truck trailers, a network of ocean freighters, and thousands of last-mile delivery vans.

Amazon, along with dropping off packages at costumers’ homes, is now able to move a good from its factory overseas to your doorstep through an internal network of ocean freighters, trains, planes, and trucks.

Many retailers like Walmart and Target have robust internal logistics networks, but Amazon’s capacity is unusually large. That’s why experts say this in-sourcing on Amazon’s part is also part of a larger scheme to make Amazon a full-fledged transportation company. Morgan Stanley recently estimated that Amazon would carry 3.5 billion outside parcels in its network by 2022, nabbing up to $100 billion in revenue from UPS, FedEx, and the USPS. 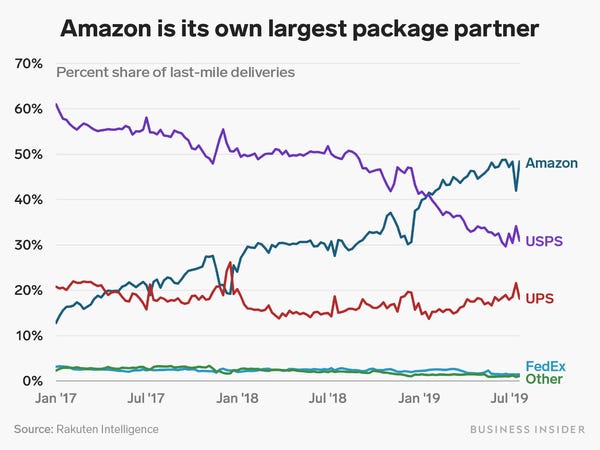 Amazon delivers the plurality of its own packages, but the USPS still moves a significant chunk.

Last year, Amazon’s efforts to get more of its transportation network in the company slammed the trucking industry.

Several logistics companies that counted the e-commerce company as a leading customer were forced to scramble last year when Amazon quickly pulled back on their customer relationship. XPO Logistics, for instance, announced in February 2019 that its largest customer, Amazon, was moving away from outsourcing to XPO, and the customer’s in-housing would ultimately slash $600 million in expected revenue.

A $402 million trucking company went under in February 2019, a bankruptcy that analysts said was partially because of Amazon’s in-housing moves.

Part of Amazon’s playbook, experts say, is to copy the business of their clients and then replicate it in-house — usually, for much cheaper. And in air cargo, the in-sourcing of gateway associates may be the start of a larger move for Amazon to control more of its supply chain.

“They’ve learned from others, they’ve pulled their business from them, and they’re going to do it on their own now,” Cathy Morrow Roberson, the founder of the consulting firm Logistics Trends & Insights, told Business Insider in 2019. “That’s just how they go.”

The pandemic is reshaping airlines…

Light on tech, heavy on…

Wirecard is beyond salvageable, according…

Warren Buffett has warned about…

Google to pay publishers for…

Air travel is about to…

Hotels rethink the rituals of…

Its not healthy to have…