When he was denied a meeting, he filed a lawsuit seeking the closure.

While his suit was dismissed, DeSantis did ultimately close the state’s beaches.

On Friday, in protest of their reopening only weeks later, the Stanford-educated trial lawyer has dressed up again — this time in a Grim Reaper costume — to tour Florida beaches to show people what could happen if Americans get passive about social distancing.

“Our beaches are a big draw. I love our beaches, and I wish could go to them,” Uhlfelder recently told Business Insider. “The progress we’re making, though, is going to be diminished with the quick reopening.”

On April 23, Uhlfelder, 47, finished up his third day of virtual depositions over Zoom and waited for a delivery.

He ordered a $24 Grim Reaper cloak from Walmart. He splurged on the scythe and gloves to go with it, he told Business Insider.

It was an inexpensive investment in drawing attention to the potential loss of life due to the coronavirus, he said.

Uhlfelder said he does understand why people — especially those who work in the service industry — want the state’s beaches, which he calls the most beautiful in the world, to reopen.

In fact, when his son asked him last week what the one thing he wants to do but can’t because of social distancing, Uhlfelder responded that it was to take a trip to the beach.

Outside of the stress relief and recreational benefits, beaches fuel Florida’s economy, he acknowledged.

“I understand the pressure because it’s such a big part of our revenue,” Uhlfelder said. “But we need to get back to normal quickly, and I think reopening prematurely is going to prolong this.”

“That’s why I’m doing things that are kind of unorthodox,” he added. “You now have a trial lawyer wearing a Grim Reaper costume on the beach. That’s not normal, but these are not normal times.”

On Friday, he started his tour by haunting four beaches in Walton County, Florida. 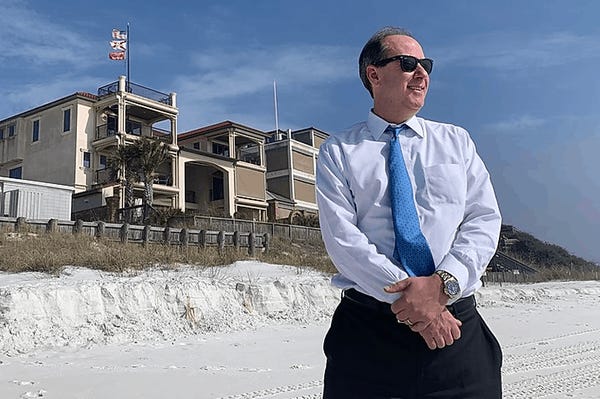 Uhlfelder is no stranger to political controversy

Uhlfelder, of Santa Rosa Beach, is a vocal supporter of keeping beaches public, something that got him a bit of Twitter attention last year.

After tweeting that Mike Huckabee’s secret service code name should be “beach thief,” a nod to his stance on privatizing some beaches in the state, the former Arkansas governor filed a formal bar complaint against him. Huckabee claimed that “disparaging” his name from the same Twitter account he uses in connection to his job was demeaning the integrity of the legal profession.

The complaint is still pending, but related media attention caused Uhlfelder’s Twitter followers to grow from 400 to more than 100,000.

“I thought, ‘What the heck am I going to do with 100,000 Twitter followers?'” Uhlfelder told Business Insider.

With his new platform, he decided to start a political action committee, called “Make My Day,” to raise money for the opponents of Republican politicians he said he considers “bullies.”

But poking fun at powerful politicians hasn’t been “without consequences,” Uhlfelder said. In addition to the bar complaint, he’s received threats from people online who are unhappy with his political protests.

“If I am measured by being on the opposite side of Ron DeSantis, Matt Gaetz, Devin Nunes, and Mike Huckabee, then I will proudly take that,” Uhlfelder said.

Nearly Half of All States…

Why Lifeguards in California Are…

Tucker: Is Fauci Under Criminal…