Gov. Gretchen Whitmer of Michigan says the coronavirus is poised to ravage her state and is demanding that President Donald Trump implement an aggressive national standard to address the crisis.

In an interview with Insider on Thursday, Whitmer said Detroit, her state’s most populous city, would “lose a lot of people” from the virus and stressed that Michigan’s healthcare system was already “at capacity in a lot of ways.”

“This toll is going to be real,” the Democrat told Insider. “We’re going to lose a lot of people, we’re going to have healthcare systems that are pushed to the brink, and it’s going to take a while to recover from this economically.”

As of Thursday, Michigan had the fourth-highest number of coronavirus infections in the country, and Dr. Anthony Fauci, the nation’s top infectious-disease expert, said he’s “worried” Detroit’s infections were “going to take off.”

Whitmer has been critical of Trump’s inconsistent response to the pandemic and demanded that he implement a single “national standard that is dictated from the federal government,” which all states must abide by. She slammed Gov. Ron DeSantis for refusing to issue a statewide stay-at-home order in Florida until Wednesday and argued that the virus would spread more widely under a patchwork system.

“I have a father who’s in Florida right now, and I’m just stunned that it took this long to get a stay-home order,” she said. “I’ve been trying to get him to come home to Michigan, frankly, because I’m worried.”

Whitmer said she wanted “one national standard that is dictated from the federal government that is as aggressive as the most aggressive state has been.”

Michigan’s response to the virus has been among the most aggressive in the country. Whitmer first declared a state of emergency in Michigan on March 10, and on March 24 she issued a statewide stay-at-home order that she wants to extend for 70 days until mid-June.

But the governor says if she is “being totally honest,” she’d have sped up the timeline on her crucial decisions.

Whitmer said recent news that the federal government had failed to properly maintain its national stockpile of essential medical equipment was “incredibly distressing.” She urged Trump to use the Defense Production Act to compel manufacturers to quickly produce life-saving supplies facing shortages.

While Trump has insisted he has 10,000 ventilators left in the stockpile, The New York Times reported Wednesday that 2,109 other ventilators in the stockpile were unusable after the government failed to hire a new contractor to maintain them last year.

“We are working so hard to supplement what we expect to be in the national strategic stockpile, and I think it just makes the work that we’re doing every single day that much harder,” Whitmer said.

“I do think that getting more people — getting everyone — covered and having a healthcare system that can meet our needs is important,” she said. “And we’re seeing it right now in real time, and I’m hopeful more people embrace that concept.” 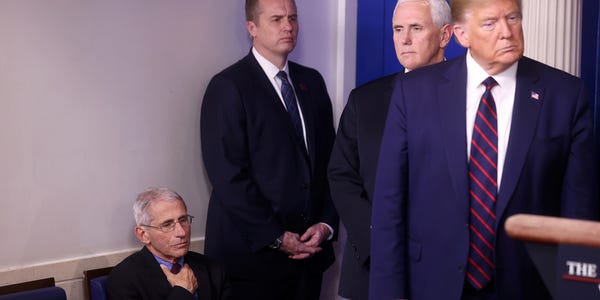 Dr. Anthony Fauci, the director of the National Institute of Allergy and Infectious Diseases, seated beside a Secret Service agent as Vice President Mike Pence and President Donald Trump arrived for the daily coronavirus briefing at the White House on March 27.

‘The woman in Michigan’

Last month, Whitmer joined a slew of other governors in requesting that the federal government send essential, difficult-to-source medical equipment.

She repeatedly pleaded for more ventilators and personal protective equipment and criticized Trump’s decision to largely leave the task of procuring these supplies up to the states.

Trump soon began publicly attacking Whitmer, questioning her intelligence and dismissing her urgent requests. The president said he told Vice President Mike Pence not to communicate with “the woman in Michigan” or the governor of Washington — both states facing more severe virus outbreaks.

“We’ve had a big problem with the young, a woman governor,” he told the Fox News host Sean Hannity. “You know who I’m talking about, from Michigan.”

Whitmer has refused to wade into personal attacks but said the federal government had interfered with several states’ ability to contract with manufacturers.

Just hours after Trump finally approved Whitmer’s request for an emergency-disaster declaration on Saturday, he labeled her with a degrading nickname: “Gretchen ‘Half’ Whitmer.”

A host of Democrats and Republicans, including Whitmer’s former GOP gubernatorial opponent, have defended her against Trump’s attacks. Former Vice President Joe Biden, who confirmed that Whitmer was on his list of potential running mates, has publicly praised Whitmer’s virus response.

Whitmer, who has endorsed Biden, said she didn’t think the 2020 presidential candidate, who’s been relatively quiet throughout the crisis, needed to speak out more strongly against Trump’s pandemic response yet.

“At the appropriate time, we as a country are going to have to really analyze all of the factors that contributed to what is going to be an incredibly sad story of how many people got sick and how many people died as a result of COVID-19,” she said. “We’re going to analyze our national strategic stockpile and what worked and what didn’t work, we’re going to have to analyze our preparation at the federal level, as well as our state responses … But in this moment, the crisis is so acute in so many different places that I have a hard time seeing past it.”

Biden schedules no events, as…

20 Questions The Media Would…

Biden vows to end the…

Obama’s rally for Biden was…

Nancy Pelosi Loses It When…

Key Source Will Turn Over…

Trump heads to Floridas The…

Biden and Sanders loyalists have…