Latest News
Home /Charts: Coronavirus is spreading faster in US than in other countries – Business Insider

As President Donald Trump continues resisting calls to impose a compulsory national coronavirus lockdown, a series of charts are showing the scale and urgency of the US outbreak.

The charts, tweeted by Financial Times data reporter John Burns-Murdoch, shows the number of confirmed new cases per day in the US rising more sharply than anywhere else in the world.

China — where the outbreak originated and where lockdown measures have been in place since January — has seen a sharp decline in new cases.

In Italy, the country with the highest official death toll, there are encouraging signs that it is “flattening the curve,” or reducing the daily number of new infections, after several weeks of national compulsory lockdown measures.

For several days now, Italy had been recording around 5,000 new cases a day.

This chart also shows how US infection count is an outlier, with more than 216,000 total recorded cases so far, and the number doubling every two-and-a-half days on average.

The rate of new cases in Italy and China began plateauing or reducing after they hit the 100,000-case mark, while in the rate is continuing to rise in the US and Spain.

Another key factor in the country comparisons is when national lockdowns and mass testing were put in place.

South Korea, where widespread testing was put in place early, was able to avoid sharp increases in infection rates.

There are also early signs that Italy, which implemented a strict nationwide lockdown three weeks ago, is seeing fewer new cases every day.

The US drags its feet on locking down the country

There are no national lockdown measures in place across the US. Instead, a federal government lockdown advisory and a series of measures have been imposed in states in a piecemeal way.

Authorities in some of the worst-affected cities, such as San Francisco and New York City, have acted early to impose compulsory lockdown measures.

Meanwhile in states like Texas, Iowa and Missouri, authorities have not issued any lockdown orders, while Florida Gov. Ron DeSantis only imposed a lockdown on Wednesday. 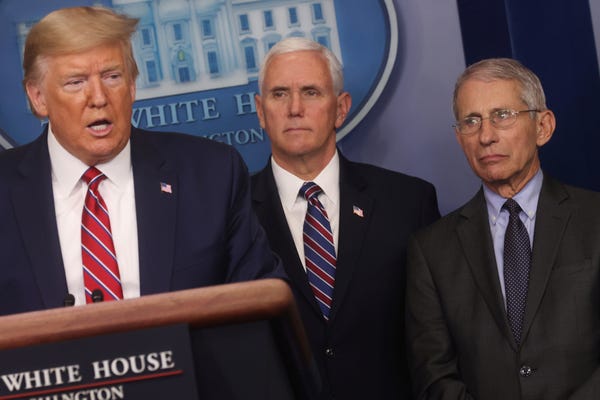 Trump imposed travel restrictions from China in February, but some critics say believe he wasted precious time by failing to introduce comprehensive testing measures to isolate pockets of infection and establish the scale of infections in the US.

Trump has so far resisted calls to take a firmer approach by issuing stronger lockdown directions and using his office to pressure governors to comply.

But it might even be too late to make a serious impact to curb the US outbreak.

“US curve is higher and steeper than any other, as the lack of early testing or lockdowns takes its toll. Action now is too late,” tweeted Burns-Murdoch.