Medical workers on the front lines of the coronavirus outbreak not only have to worry about catching the disease themselves — they also risk losing their jobs if they speak publicly about the challenges they’re facing.

Doctors and nurses are reportedly being threatened against speaking to the press or posting on social media about their concerns, according to multiple reports in recent days.

Some have already lost their jobs. Ming Lin, an emergency-room physician at PeaceHealth St. Joseph Medical Center in Bellingham, Washington, told Bloomberg that he was fired last week for speaking to a newspaper about the lack of protective equipment and testing.

Lauri Mazurkiewicz, a nurse in Chicago, told Bloomberg that she lost her job at Northwestern Memorial Hospital after sending an email to colleagues, urging them to wear more protective gear.

A spokesman for Lin’s former hospital told Bloomberg that the worker was “publicly critical” about the hospital’s readiness. A Northwestern spokesperson declined to comment to the outlet because the nurse has filed a lawsuit. 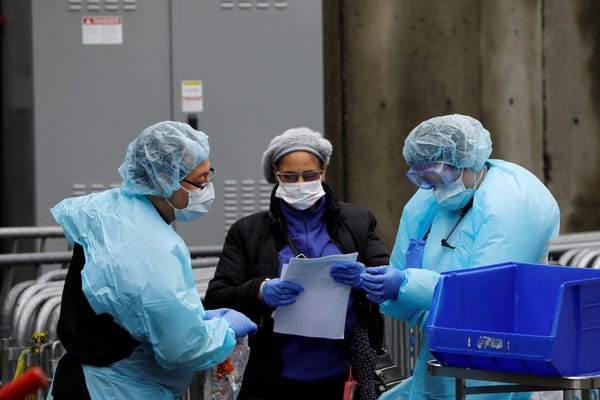 Hospital workers near a tent erected to test for the coronavirus disease at the Brooklyn Hospital Center in Brooklyn, New York City, on March 19, 2020.

Workers at two healthcare systems in New York City — NYU Langone and Montefiore Health System — told Bloomberg that they had received memos in recent days reminding them of policies to run all media requests by their public relations department.

Failing to do so would make them “subject to disciplinary action, including termination,” said the memo sent to NYU workers.

A spokesperson for Montefiore told Business Insider that its “media policy has been the same for many years” and “has not changed due to the current situation.”

Nisha Mehta, who runs two popular Facebook groups for doctors, also told Bloomberg that she heard from multiple people who said they’re being pressured against talking to the media by their hospitals.

“I’m hearing widespread stories from physicians across the country and they are all saying: ‘We have these stories that we think are important to get out, but we are being told by our hospital systems that we are not allowed to speak to the press, and if we do so there will be extreme consequences,'” Mehta said.

Two emergency-room workers have also told Business Insider they would need to clear any possible interview with their respective hospitals — Henry Ford Health System in Detroit and Ochsner Medical Center in New Orleans — before speaking. 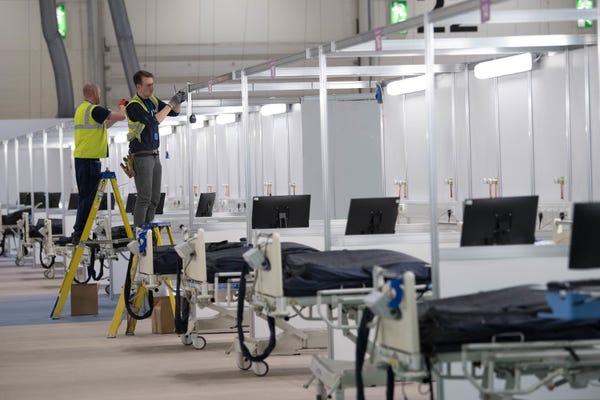 Work being carried out at the ExCel centre in London to transform it into a temporary hospital for coronavirus patients.

A similar story is being echoed in the UK, where a physicians’ lobbying group says it has evidence from multiple National Health Service (NHS) workers, who say they’ve been threatened against complaining publicly about the lack of protective equipment.

“At this time when we desperately need every single doctor on the frontline, some have had their careers threatened, and at least two doctors have been sent home from work,” Dr. Samantha Batt Rawden, president of Doctors Association UK, told The Guardian.

“This is unacceptable. Doctors have a moral duty to make their concerns regarding COVID-19 public if these cannot be resolved locally.”

A NHS spokesman told Business Insider in a statement that its workers are free to talk to the press.

“Once a major incidents occurs it is vital that the public receive fast, authoritative, open, clear and consistent information from their NHS, which is why in line with longstanding EPRR protocols, official communications are therefore always coordinated nationally.

“But staff continue to speak in a personal, trade union or professional body capacity, and it is self-evident from print and broadcast media coverage throughout this incident that staff are able and do in fact speak freely.”

Europe COVID-19 outbreak getting out…

Could a common antioxidant enzyme…

Donald Trump and Melania have…

Zika and other arboviruses linked…

Work-life balance for physicians: The…