Michael Bloomberg may have gotten a late start in the presidential race, but his campaign is hoping that a distinct — and eyebrow-raising — approach on social media will help the Democratic hopeful gain some ground.

Photos of Bloomberg’s face in a meatball and shoutouts to Tostitos tortilla chips have baffled the public. Twitter posts about Lady Gaga and Secret Service codenames drew concerns that his campaign account was hacked (it was not). It wasn’t clear whether a video showing Bloomberg with a carton of Big Gay Ice Cream was a sponsored post, or Bloomberg just sharing how much he likes the popular New York City ice cream chain.

But if any of these unusual social media posts have caused you to take a pause or screenshot to send to your friends, Bloomberg’s campaign has done its job, according to his national spokesperson Sabrina Singh.

Singh recently told Business Insider how the campaign is using an “unconventional” approach to wooing over young voters by not just posting on social media, but putting up content that gets people to respond or take notice of the 78-year-old former New York City mayor. Bloomberg can afford to spend, with an individual net worth of more than $62 billion. It’s at least 10 times more than Trump was worth during the 2016 election, which was estimated between $3 billion and $5 billion.

A strategy of oversaturation

Bloomberg seems to be replicating the social-media strategy made famous by Trump, who spent nearly $20 million to inundate Facebook users’ feeds with hundreds of thousands of fear-mongering and fact-bending ads. However, Bloomberg has spent even more than Trump in order to widen his campaign’s approach to cover a wide berth social media — and dictate different strategies for each platform that are proven to be effective in going viral. While Bloomberg’s Twitter thrives on content just weird enough that it could get users to share it thousands of times, his Instagram presence has harnessed its multi-billion dollar influencer marketing industry to figure out what users want.

Since launching his campaign in November, Bloomberg has spent big to make his online presence known. He’s poured in more than $300 million on ads across TV, radio, Facebook, and Google — more than the four other leading Democratic candidates have spent combined.

At one point earlier in February, Bloomberg’s team was spending an average of more than $1 million a day on ads for Facebook alone.

“You want people to feel like it’s not just a canned generic statement they’re getting,” Singh told Business Insider. “We’re not only engaging with folks online, but trying to reach them on any platform that meets their needs.”

But Bloomberg’s social-media strategy team — made up of a “diverse” and “innovative” group of employees from the 2020 campaign and from Bloomberg’s little-known tech firm Hawkfish, according to Singh — has gone beyond distributing a steady stream of zany tweets and messages.

The flood of Bloomberg-sponsored content has been noticed across Twitter, Instagram, and other popular platforms. According to the Wall Street Journal, the campaign is shelling out $2,500 a month to more than 500 workers, who are expected to send weekly text messages to their phone contacts and make daily posts on social media that voice support for Bloomberg.

As first reported by the Daily Beast’s Scott Bixby, the Bloomberg campaign recently tried to recruit smaller influencers to create original content for the team. Bloomberg’s campaign offers a fixed $150 fee to produce social media posts that “Show+Tell why Mike is the candidate who can change our country for the better, state why YOU think he’s a great candidate,” according to a post on influencer marketplace Tribe.

Under Tribe’s influencer guidelines, participating influencers are obligated not to “parody, disparage, give any adverse comment or make fun of” the brand they’re employed by — in this case, Bloomberg.

More recently, some of Instagram’s most popular meme accounts were targeted. With more than 60 million combined, several meme accounts dropped sponsored posts promoting Bloomberg en masse, as first reported by the New York Times’s Taylor Lorenz. Each account posted a very meta screenshot of what appears to be an Instagram direct message conversation with Bloomberg, in which he requests a sponsored post, or shares a dad humor-type joke, or flaunts how much money he has.

Although the meme blitz has gotten praise from some, it doesn’t appear everyone is sold by Bloomberg’s strategy. Another popular meme account, The Fat Jewish, commented on the sponsored post on Tank.Sinatra’s Instagram: “Tank you’re a beautiful man, but this is an L.” 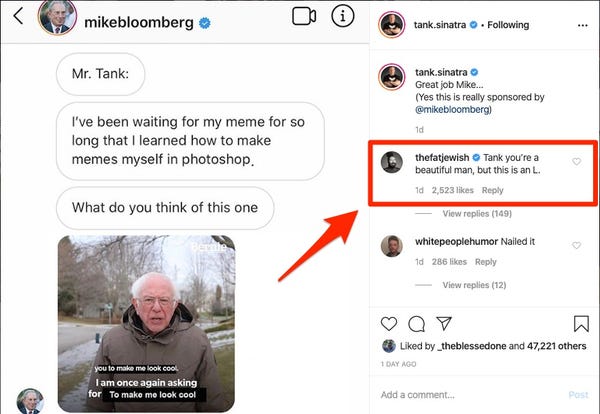 “Mike Bloomberg 2020 has teamed up with social creators to collaborate with the campaign, including the meme world,” Singh told the New York Times. “While a meme strategy may be new to presidential politics, we’re betting it will be an effective component to reach people where they are and compete with President Trump’s powerful digital operation.”

It’s unclear what kind of impact the Bloomberg campaign’s tactics have had on younger Democratic voters, who have a field of eight presidential candidates to choose from. Bloomberg has risen to fourth place in the Democratic race in national polling, and has since qualified for a spot on the Democratic debate stage for the first time.

The combination of memes, influencer outreach, and an outlandish social-media presence gives the impression that Bloomberg and his team want to show he doesn’t just understand millenials; he gets Generation Z. Bloomberg has also taken direct aim at Trump in his campaign posts, as Democratic voters’ displeasure with the Republican president roars ahead of the November election.

As an example of the unique approach of Bloomberg’s campaign, Singh pointed at the campaign’s Twitter post during the State of the Union that showed Trump talking alongside an animated dancing gingerbread man engulfed in flames.

Bloomberg 2020’s social-media strategy has been emphasized most when the former governor has pushed his stances on social policies, such as climate change and LGBTQ rights. On the day in January that Bloomberg took to Twitter to roll out position on LGBTQ equality, the Bloomberg campaign posted a puzzling 10-second video.

“Where’s my ice cream?” Bloomberg asks in the video on Twitter. Someone off-screen hands him a pint of ice cream from Big Gay Ice Cream, a New York-based ice cream shop known for its bright-colored signery and offerings.

On his website, Bloomberg has promised expand health care for LGBTQ individuals and address hate crimes toward the community. Bloomberg’s campaign shared a video Tuesday pledging the candidate’s support of LGBTQ youth. The same day, a 2019 video uncovered by Buzzfeed News showed Bloomberg referring to transgender people as “it” and a “guy wearing a dress.”

To end his short video on Twitter, Bloomberg takes a bite of ice cream, and looks right into the camera.