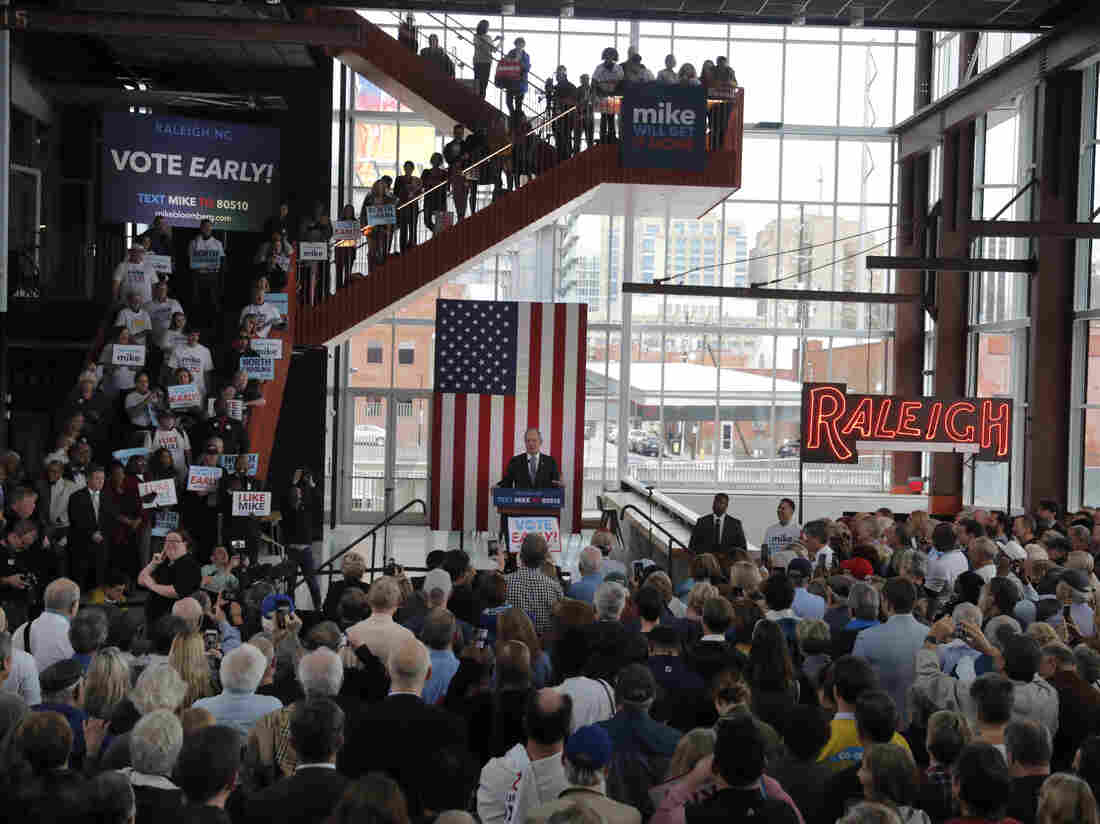 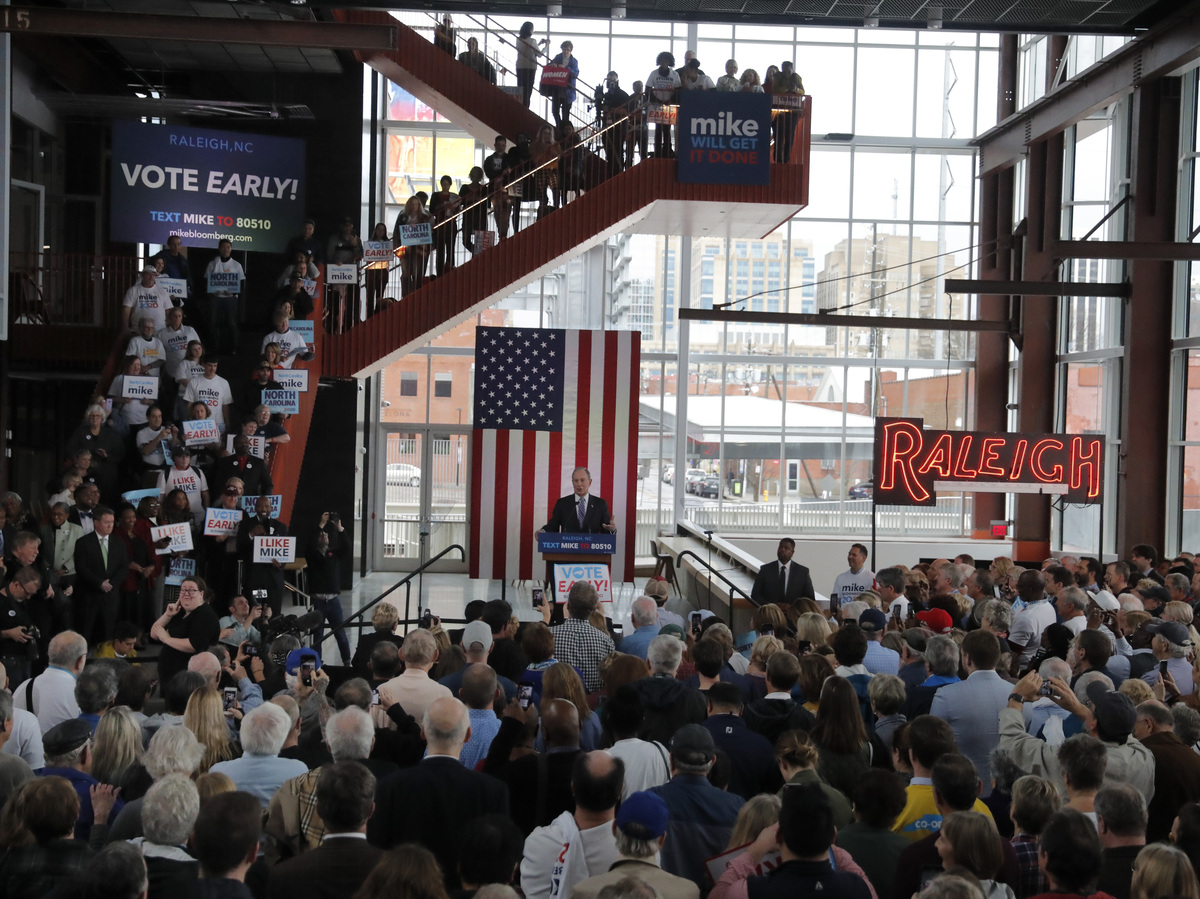 Mike Bloomberg has wrapped up a barnstorming trip to capitalize on an unsettled Democratic presidential race.

But Bloomberg is skipping all of the early states and banking instead on proving his campaign’s viability by doing well on Super Tuesday, when 14 states vote on March 3.

His heavy schedule of campaign events coupled with large TV ad buys will continue promoting the campaign narrative captured in the campaign slogan that is featured in ads, on posters, t-shirts and other campaign paraphernalia: “Mike will get it done.”

Bloomberg made two stops in Houston Thursday night, preceded by rallies in three different North Carolina cities earlier in the day. That came after a pair of events in Tennessee on Wednesday.

There are no attacks on his competition for the nomination. He doesn’t mention his Democratic opponents by name. He says he’ll support the Democratic nominee if it’s not him (“God forbid,” he says). The closest he comes is when he says the country needs “evolution, not a revolution” — a clear reference Sanders, whose campaign is premised to the need for revolutionary change in America. 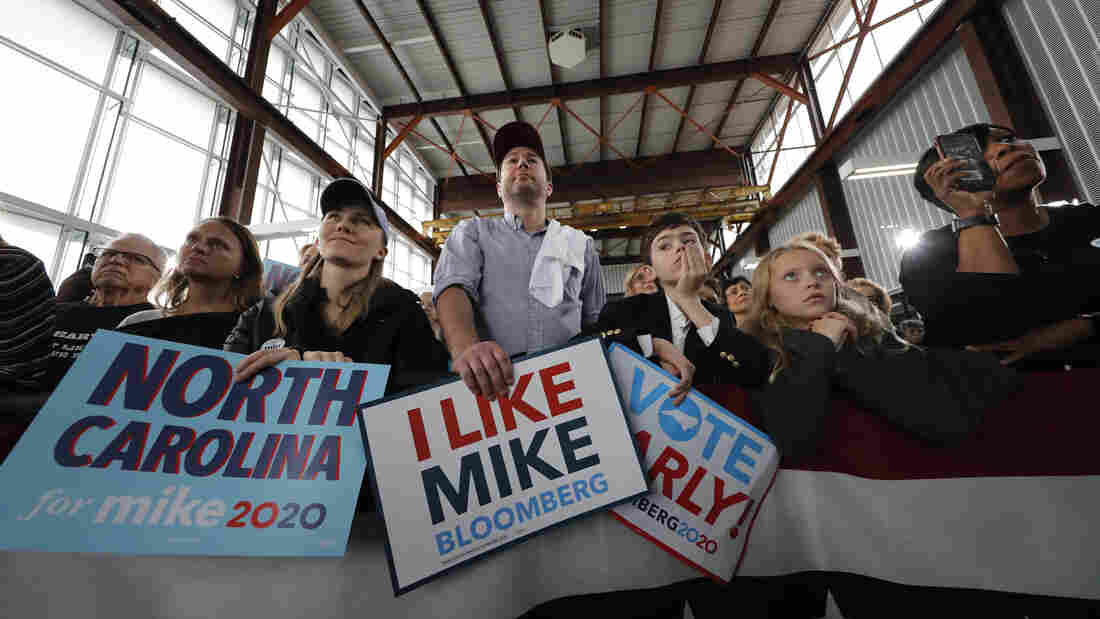 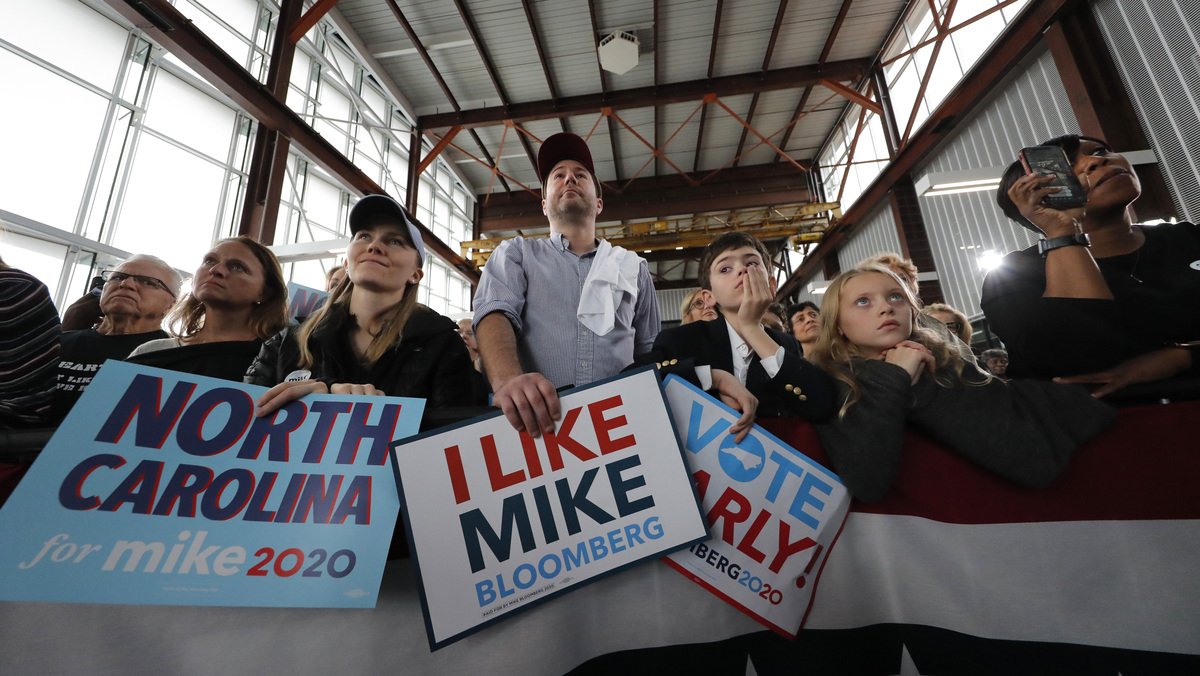 Instead, Bloomberg’s main target is the obvious one. At every rally he says, right near the top, “Let me be clear about why I am in this race. I am running to defeat Donald Trump.”

Then comes the pledge to restore honor to our government, to build a country we can be proud of, to bring people together, and to get things done.

Under President Trump, Bloomberg intones, “this is a national emergency.”

He portrays himself as someone who has done so well in life – amassing a fortune estimated to top $60 billion — that there’s nothing Donald Trump can do to hurt him. He can’t be bullied, he says, “I’m a New Yorker and I’m not afraid of Donald Trump.”

Then comes the punch line – “Donald Trump is afraid of me.”

The president and the candidate who promises to defeat him exchanged barbs in the form of tweets Thursday.

Mini Mike is a 5’4” mass of dead energy who does not want to be on the debate stage with these professional politicians. No boxes please. He hates Crazy Bernie and will, with enough money, possibly stop him. Bernie’s people will go nuts!

.@realDonaldTrump – we know many of the same people in NY. Behind your back they laugh at you & call you a carnival barking clown. They know you inherited a fortune & squandered it with stupid deals and incompetence.

I have the record & the resources to defeat you. And I will. https://t.co/fO4azmZaUg

Then, speaking in Greensboro, N.C., Bloomberg used his rally to respond to Trump’s latest insults. “He calls me Little Mike and the answer is, Donald, where I come from, we measure from your neck up,” he said.

Bloomberg’s attacks on Trump elicited cheers from packed houses in coffee shops, community centers, music clubs and even a train station in cities including Chattanooga, Tenn., Nashville, Tenn., Winston-Salem, N.C., Greensboro, N.C., and Raleigh, N.C. In interviews many of them say they are still undecided on who to support, even as early voting has gotten underway this week in their states. 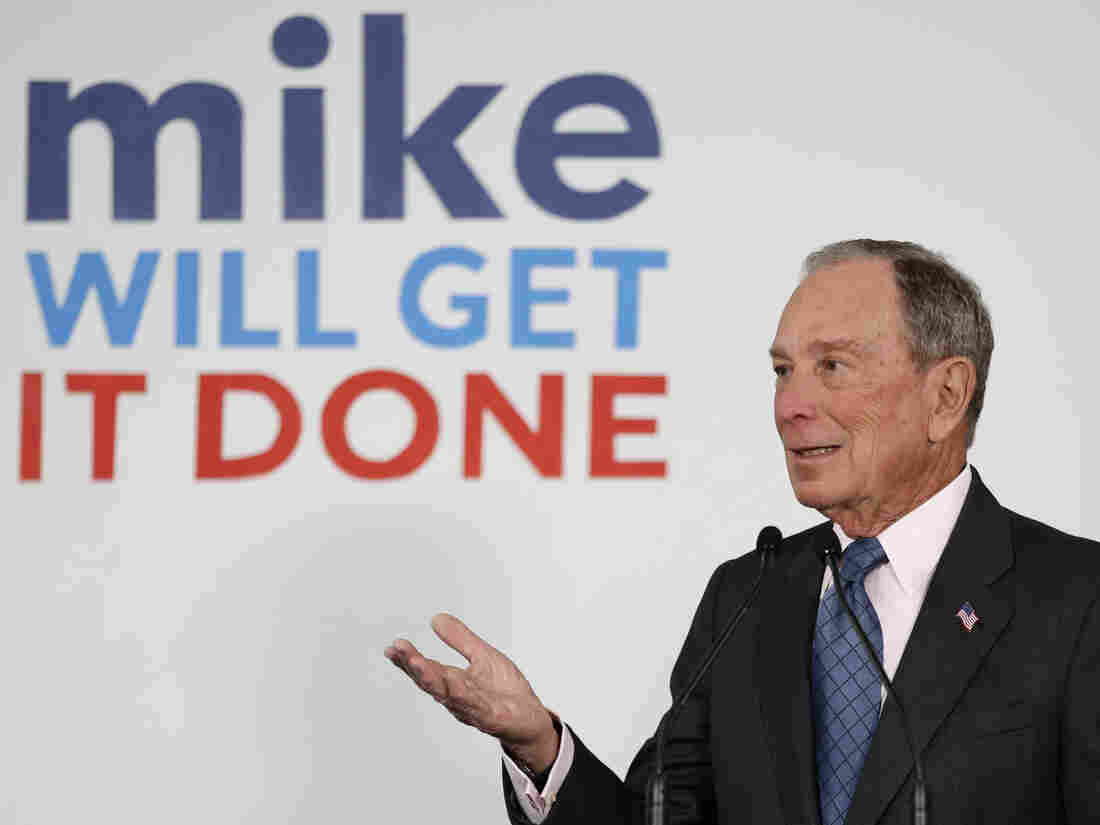 Bloomberg speaks to supporters at a campaign office last month with “Mike will get it done” displayed on the wall behind him. 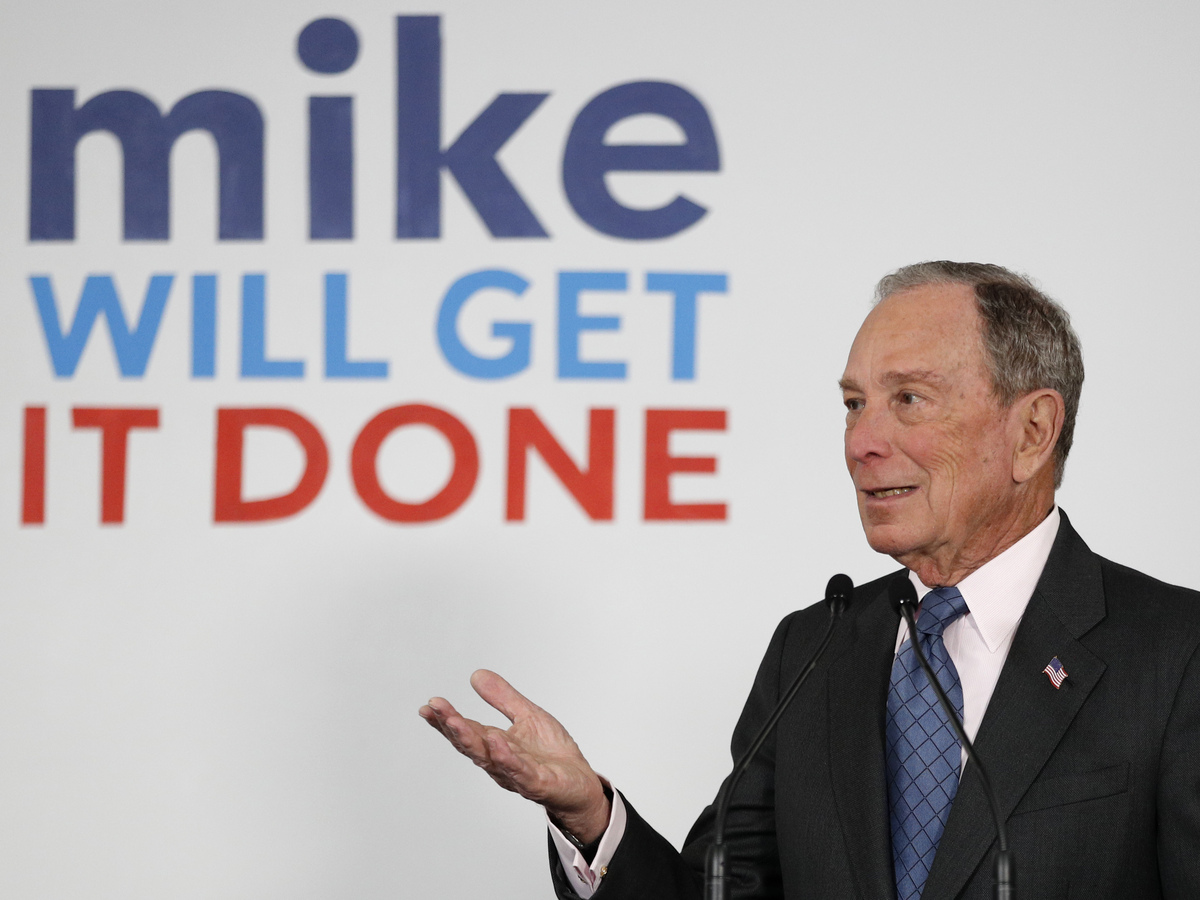 Bloomberg speaks to supporters at a campaign office last month with “Mike will get it done” displayed on the wall behind him.

One of those voters is retiree Michael Day. He notes the frequent criticism of Bloomberg as a billionaire trying to buy his way into the presidency even though he entered the race just 11 weeks ago. Day says normally Bloomberg’s wealth would bother him. Not this year. He says it may take someone with such vast personal resources to defeat President Trump.

But some who showed up were simply curious to see what Bloomberg has to offer. Briana Brady, 20, was at the Chattanooga event with her mother. She said she was glad to have a presidential candidate coming to Tennessee so early in the campaign, something she couldn’t recall seeing before. But she’s not sold on Bloomberg. As for her vote, she says, “I’ve kind of changed to the Warren-supporting crowd but following her performance in Iowa and New Hampshire obviously having to reconsider.” For now, she says she’s still with Warren “but we’ll see what progresses over the next few weeks.”

The sudden attention the Bloomberg campaign has been getting hasn’t all been positive. Two stories from his past broke this week. One from 2015, when in a speech to the Aspen Institute he spoke positively of New York City’s so-called stop-and-frisk policy, which allowed random searches of people on the street. It actually disproportionately targeted African-Americans. In those remarks, Bloomberg said “95% of your murders and murderers and murder victims fit one M.O. You can just take the description and Xerox it and pass it out to all the cops. They are male minorities 15 to 25.”

Prior to this week, he had already disavowed and apologized for promoting and expanding stop-and-frisk as mayor. But this week, when asked about the 2015 comments, he told reporters, “this issue and my comments about it do not reflect my commitment to criminal justice reform and racial equity.”

A separate story quoting Bloomberg from 2008, appeared to show him bemoaning the end of the discriminatory lending practice known as “redlining” in which entire neighborhoods were deemed unsuitable for mortgages and other loans. In those comments, he says the end of redlining led to many bad loans which then contributed to the 2008 mortgage crisis.

Campaign spokesman Stu Loeser told the Associated Press that as mayor Bloomberg “attacked predatory lending” as mayor and that he has a plan to “help a million more Black families buy a house, and counteract the effects of redlining and the subprime mortgage crisis.”

The Bloomberg campaign has also countered such news with a string of endorsements in recent days from prominent African American mayors and members of the congressional black caucus. Bloomberg has supported many of their reelection efforts in the past. Now he reaps the benefits of their support.

Because Bloomberg is not on the ballot in the next states to vote, Nevada and South Carolina, his strength with voters can only be measured so far by his polling numbers. He continues to flood the airwaves with TV commercials that show him calling for action on climate change, gun violence, and one featuring clips of Barack Obama as president showering praise on Bloomberg.

Voters get to sort through it all and give their first assessment on Super Tuesday. That’s when we’ll learn much more about how formidable of a candidate Mike Bloomberg will be.