A British Airways flight on Saturday smashed the record for the fastest subsonic transatlantic passenger flight after a storm battering the UK hugely accelerated wind speeds in the jet stream.

It arrived at 4:43 a.m. UK time, almost two hours earlier than expected, according to the flight-tracking site FlightRadar24. The average time for this journey is normally six hours and 30 minutes.

“The flight took advantage of a well-placed and strong jet stream to reach London in under 5 hours,” FlightRadar24 said.

The jet stream is a core of strong winds, measuring between 5 to 7 miles, that blow from west to east — so, from North America to Europe — across the North Atlantic Ocean. It’s located in the tropopause, above the Earth’s surface.

Winds in the jet stream reached 200 mph at the time of the flight, the CNN meteorologist Brandon Miller said.

You can see the jet stream around the time of Saturday’s record flight illustrated here: 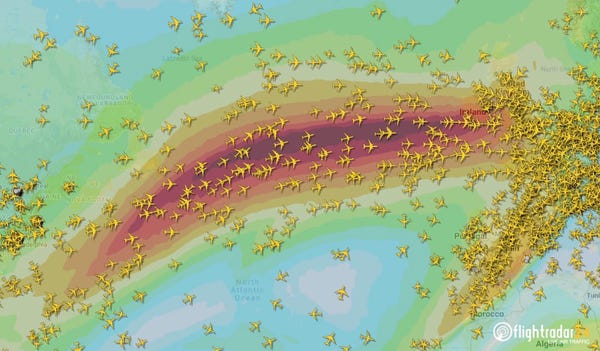 A map showing the jet stream responsible for driving the British Airways flight faster than usual on Saturday.

The exceptionally strong winds on Saturday came at about the time Storm Ciara arrived in the UK and Ireland, bringing severe winds and widespread flooding to the country over the weekend.

A 58-year-old man died Monday after a tree fell on his car while he was driving in Southern England, the BBC reported.

The subsonic record for the same New York-to-London route — which excludes flights from the supersonic Concorde — was held by a Boeing 787 plane flown by Norwegian Airlines, which took five hours, 13 minutes in January 2018.

Referring to its Saturday flight, a British Airways spokesman told Business Insider: “We always prioritize safety over speed records, but our highly trained pilots made the most of the conditions to get customers back to London well ahead of time.”

Storm Ciara was responsible for major travel disruptions across over the weekend, with 25,000 passengers affected by flight cancellations from Heathrow Airport alone, according to The Independent.