An aspiring social media star who forced a plane to make an emergency landing after joking that he could have the deadly coronavirus says he was trying to get a viral video and has apologized for interrupting passengers’ journeys.

WestJet Flight 2702 from Toronto to Montego Bay, Jamaica, turned around about two hours into the flight on Monday and returned to Pearson International Airport after James Potok joked on board that he had traveled to the region of China where the virus originated, where hundreds of people have died and millions are quarantined.

In an interview with Canada’s Global News, Potok said: “I stood up, I said, ‘Can I have everybody’s attention, I just came back from Hunan province.’ And that was it.”

He told Toronto’s City News that he had announced: “I just came back from Hunan province, the capital of the coronavirus…I’m not feeling too well. Thank you.”

The coronavirus outbreak started in the city of Wuhan, which is actually located in China’s Hubei province, not Hunan. About 700 people cases of infection have been confirmed in Hunan.

Potok said the airline staff then put him in a mask and gloves.

The Canadian Broadcasting Corporation said 243 people were on board.

Video shared on social media showed Potok being taken off the plane:

WestJet said in a statement that the flight crew had followed infectious-disease protocols “out of an abundance of caution” and that the flight was diverted because of an “unruly guest,” CBC reported.

Ontario’s Peel Regional Police said in a statement that Potok’s announcement “was shared with the flight crew and a decision was made to return the flight to Pearson Airport,” CBC reported.

They said Potok was inspected medically and was found to be free of symptoms. He was arrested and charged by the police.

Potok is scheduled to appear in court in Brampton on March 9, facing the charges of mischief and breach of recognizance.

“They’ve charged me criminally, and I have court to go to,” Potok told Global News.

Here’s the route the plane ended up taking: 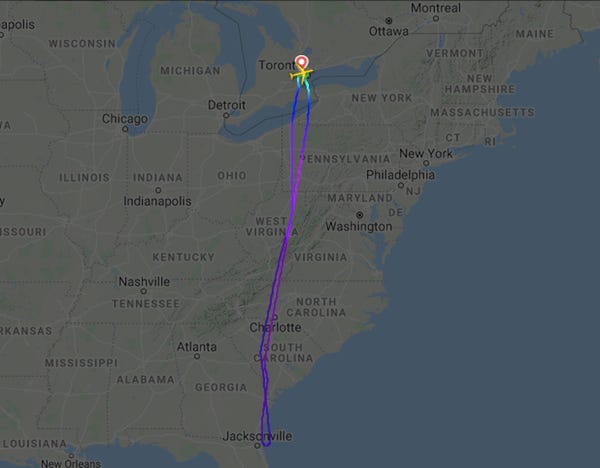 The flight path of Flight WS 2702 from Toronto, which returned to Pearson International Airport after takeoff.

Social-media footage shared by City News showed passengers criticizing Potok as he was taken off the plane, including saying “That was a good one” and “We could have been in the sun.”

Potok, who goes by the name Potok Philippe, described himself as an artist when describing his desire to go viral to Global News.

“I’m an artist,” he said. “Any publicity for myself is good publicity.”

Potok makes music videos and has more than 34,000 followers on his Instagram account, which has now been set to private. A YouTube channel called Potok Philippe, which shares his music videos, has 715 subscribers. He also has a Spotify channel, which has about 11,000 monthly listeners.

“I figured it would invoke some kind of reaction — not on the plane, more people seeing on social media going, ‘Wow, this kid’s got some balls,’ or, ‘This kid is crazy,’ whatever it is.”

“I was looking to create a video, yes, that would go viral,” he said.

But he said he was apologetic for the effect on other passengers.

“It seems to me like this was in poor taste, in retrospect,” he told Global News. “What I did was wrong. I ruined the flight for 200 and somewhat people. I ruined their flight.”

You can watch the interview here:

He described the reaction to his actions as mixed.

Potok said he had done other viral videos on planes with no issues.

“No problem with that. I sat back down, landed, everyone got off. No issue.”

The virus has infected more than 20,000 people in China, and some cases have spread to at least 26 more countries. It has killed 492 people.

French schoolgirl says she made…

The ‘Squad’ wants to free…