President Donald Trump’s attorney, Alan Dershowitz, has based his defense in the president’s impeachment trial not on a point-by-point disputation of the evidence presented by Democrats, but on seeking to undermine the very foundation of their argument.

Dershowitz has argued that abuse of power and obstruction of Congress — the charges that got Trump impeached in the first place — simply aren’t crimes, so can’t be grounds for removing a president from office.

On Wednesday he took his arguments a step further, telling senators that if a president believes that they are acting in the public interest, they cannot be impeached.

In other words: because Trump believes his reelection is in the public interest, whatever actions he made to pursue that interest cannot be grounds for removal from office, Dershowitz said.

It is an argument that critics say evoked President Richard Nixon’s infamous defense of total presidential authority in 1977: “When the President does it, that mean it’s not illegal.”

Nixon made this argument in an interview with British journalist David Frost, three years after resigning from office while facing his own impeachment.

“And if a president did something that he believes will help him get elected, in the public interest, that cannot be the kind of quid pro quo that results in impeachment.”

According to Dershowitz, Trump’s actions are in the public interest even if they are in the form of a so-called pro quo arrangement that Trump sought to broker with Ukraine — seeking the politically-damaging announcement of a probe into top Democrat Joe Biden in exchange for the unfreezing of $400 million in military aid.

The argument neatly sidesteps the need to refute evidence that has emerged from former White House national security adviser John Bolton, who has in an upcoming book claimed that Trump told him directly he did make the Ukraine aid conditional on a Biden probe. 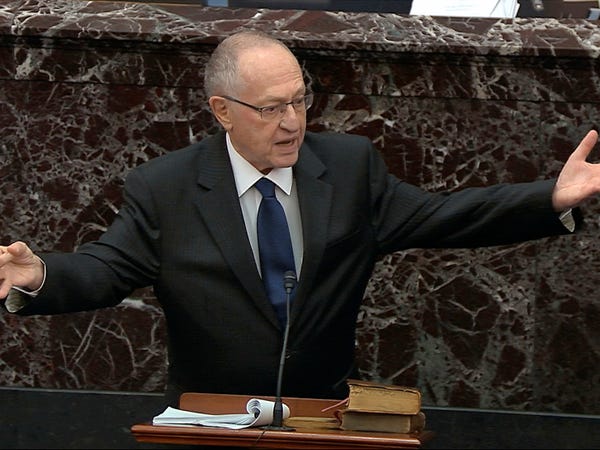 In this image from video, Alan Dershowitz, an attorney for President Donald Trump, speaks during the impeachment trial against Trump in the Senate at the U.S. Capitol in Washington, Monday, Jan. 27, 2020. (Senate Television via AP)

The Trump defense team’s argument also has another huge ramification.

It blows up a decades-long consensus on the limits of presidential power and suggests that Nixon was right, and should never have impeached for his role in the Watergate break-in. It implies a startling expansion of presidential authority.

In 1974, Nixon was facing impeachment charges of abusing his power for covering up the infamous break-in at Washington, DC’s Watergate complex, by his allies who were seeking politically damaging information about the Democrats ahead of his reelection.

He resigned from office before he could be impeached. 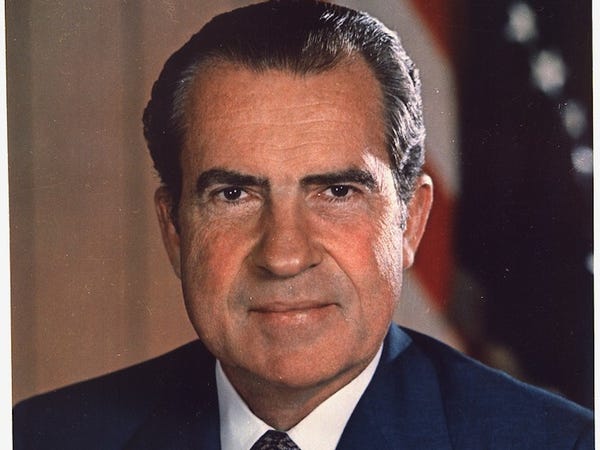 On Wednesday John Dean, who served as White House counsel under Nixon, tweeted: “Alan Dershowitz unimpeached Richard Nixon today. All Nixon was doing was obstructing justice and abusing power because he thought he was the best person for the USA to be POTUS.”

“Seriously, that was his motive! Agree with Alan and impeachment is gone!” he said.

“That would allow a president to do literally anything and destroy re-elections as a check on presidential behavior,” Katyal told NBC News. “I’m sure Nixon thought the break-in was OK because it aided his re-election, which was supposedly in the public interest, too.”

In a subsequent tweet he added that if Dershowitz’s arguments became policy, presidents would be less constrained in their use and abuse of power than monarchs.

Under Dershowitz’s defense there is a caveat. If a president is guilty of a statute book crime, they can still be removed from office. But Nixon was never charged with any crimes, and Trump has not been either.

But however you fine tune it, it’s an argument that implies a staggering expansion of presidential authority.

Writing in The Washington Post, former Democratic representative Elizabeth Holtzman, who sat on the House judiciary committee that voted to impeach Nixon in 1974, said Dershowitz was seeking to sweep the Nixon precedent “under the rug.”

“I concluded from the Nixon impeachment precedent that, to constitute an impeachable offense, the president’s misuse of the powers of his office must be grave and substantial, and must threaten our democracy. The articles of impeachment against Trump meet these standards,” she wrote.

Crashing the Border- The Left’s…