The NBA legend Kobe Bryant’s helicopter crashed in fog conditions considered so dangerous that the Los Angeles Police Department had grounded its flights at the time, CBS News and the Associated Press report.

Bryant’s Sikorsky S-76 private helicopter, known for its strong safety record and reputation for VIP transport, crashed at about 9:45 a.m. local time on Sunday, killing all nine people on board.

“The weather situation did not meet our minimum standards for flying,” a Los Angeles police spokesman, Josh Rubenstein, said Sunday night, according to CBS News.

The fog “was enough that we were not flying,” he said, adding that the police didn’t fly any of their helicopters until later that afternoon. 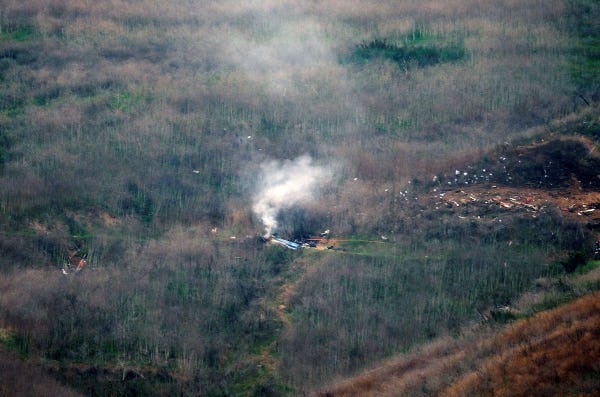 Smoke rose from the scene of the helicopter crash that killed Bryant in Calabasas, California, on Sunday.

It’s not entirely clear whether the Los Angeles Police Department had grounded its flights at the time Bryant’s helicopter took off, and the department’s media office was unavailable for comment at time of publication.

Flight-tower audio recordings published by TMZ indicated that the pilot of Bryant’s helicopter had been told he was flying too low at one point during the flight.

The pilot had contacted flight control at Burbank Airport at about 9:30 a.m. local time, TMZ reported.

The aircraft had circled the area near the Los Angeles Zoo at least six times at a very low altitude at the time, TMZ reported, suggesting the pilot may have been waiting for the fog to clear.

The flight path of Bryant’s helicopter that crashed.

Flight-tower audio recordings published by TMZ showed aviation authorities in communication with the pilot over a period of time.

Referring to the helicopter’s tail number, N72EX, a flight-tower staff member could be heard saying at one point: “Two echo X-ray, you’re still too low level for flight following at this time.”

Colin Storm, a Calabasas resident who was nearby, described hearing the crash from his living room.

“It was very foggy, so we couldn’t see anything,” he said. “But then we heard some sputtering and then a boom.” 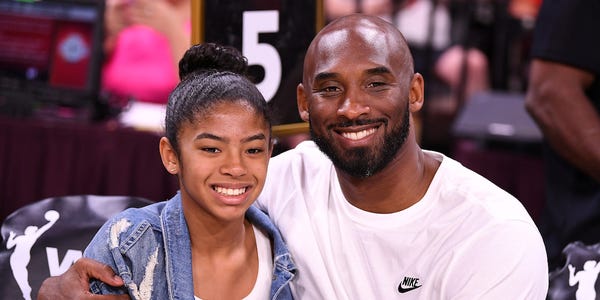 Bryant with his daughter Gianna at the WNBA All Star Game at Mandalay Bay Events Center in Las Vegas in July.

The Los Angeles County medical examiner, Dr. Jonathan Lucas, said that the crash site’s rugged terrain was complicating recovery efforts and that it would take at least two days to complete that task, the AP reported.

The victims of the crash included Bryant, his 13-year-old daughter, Gigi, and the Orange Coast College baseball coach John Altobelli and his family.

Reward for wanted gunman who…

Trump to visit California to…

Map: US West Coast has…

US reducing troop size in…