President Donald Trump’s impeachment trial opened in Senate this week, following a set of hoary rules derived from English legal practices where the impeachment process has its roots.

But on another level, this is very much a 21st-century trial.

Lawmakers aren’t focused on presenting sober legal arguments to win over the opposition. Instead, they are pitching to the Americans outside the beltway watching the trial on cable news, or following it on social media.

As the 2020 election gears up, it’s a battle for hearts and minds. For Trump’s defenders, it’s all about reinforcing a narrative long familiar from Fox News or the president’s own Twitter feed.

They are seeking to portray the impeachment process as a desperate partisan plot, cooked up by Democrats to end Trump’s presidency.

Their strategy is characterized by emotionally-charged attacks, rather than a detailed, point-by-point rebuttal of the case argued by Democrats. 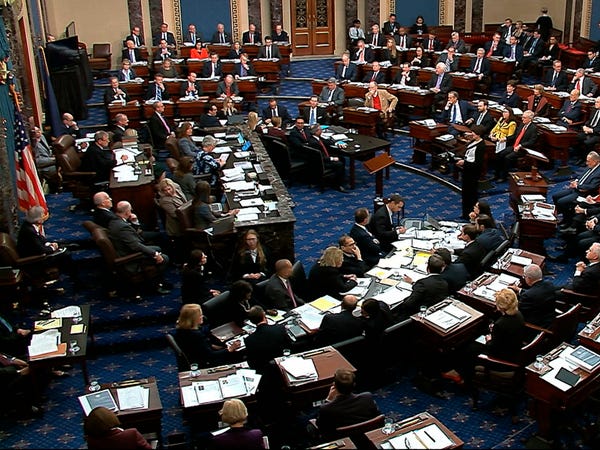 In this image from video, the Senate votes on the amendment offered by Senate Minority Leader Chuck Schumer, D-N.Y., in the impeachment trial against President Donald Trump in the Senate at the U.S. Capitol in Washington, Tuesday, Jan. 21, 2020. (Senate Television via AP)

The fiery performances of White House counsel Pat Cipollone in the opening day of the trial best exemplify the approach — and have earned Trump’s praise.

Democrats are “not here to steal one election. They’re here to steal two elections.” Cipollone said Wednesday. “It’s buried in the small print of their ridiculous articles of impeachment. They want to remove President Trump from the ballot.”

Democrats, meanwhile, are making the case that Trump and his emissaries strongarmed Ukraine into announcing a corruption investigation that would politically damage the president’s 2020 Democratic opponent, Joe Biden. In other words, they are saying that the president misused his office for personal gain. It’s an approach in which respect for the facts is, in some instances, taking second place to hammering home the narrative of a partisan conspiracy.

On Wednesday, Cipollone baselessly claimed that Democrats had denied Republicans access to closed-door depositions of evidence in the impeachment probe.

Democrats had in fact invited some Republicans to hearings in the House of Representatives’ Sensitive Compartmented Information Facility (SCIF) during the impeachment probe, and some had attended.

Away from the Senate chamber, this defense is being repeated and amplified by the president’s defenders on Fox News and other other conservative media outlets, as well as by the president himself on Twitter.

The president on Wednesday broke his own record for the most tweets in one day — one per 88 seconds — in sharing impeachment trial attacks on Democrats by Senate allies.

Making sure Republicans ‘stay inside the tent’

Trump’s strategy has a clear objective in mind.

Democrats need only four Republicans to vote with them in order for potentially damaging new evidence to be admitted in the impeachment trial, and new witnesses heard.

By keeping a firm grip on the Republican base, Trump is sending out a warning shot that those who vote against him will be swiftly voted out of office.

“They have the senators in mind, but also the broader public,” David Alan Sklansky, a Stanford University criminal law professor and former prosecutor, told The New York Times.

“The president’s side wants to keep the heat on Republican senators to make sure they stay inside the tent.” 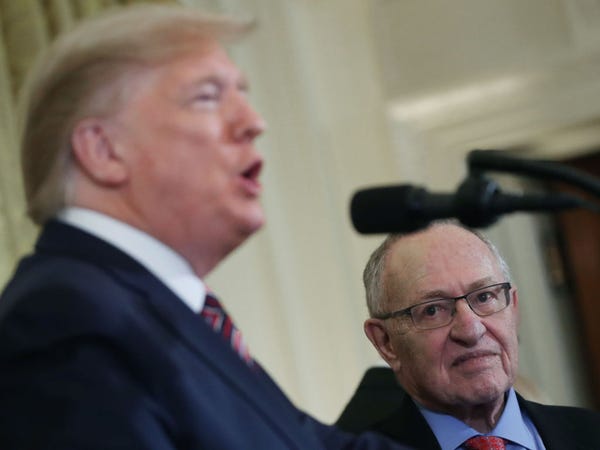 Professor Alan Dershowitz listens to U.S. President Donald Trump speak during a Hanukkah Reception in the East Room of the White House on December 11, 2019 in Washington, DC.

Riling up the base – via Fox News

Trump has packed his legal team with frequent Fox News contributors, such as former Harvard law professor Alan Dershowitz and Ken Starr, who led the impeachment of Democrat Bill Clinton in 1998.

According to Media Matters, members of his legal team have appeared on the network 350 times in the past year.

“A Fox News defense is what Trump is after — one that appeals to the base and thus keeps the pressure on Senate Republicans to avoid letting their consideration of the evidence against Trump get out of hand,” noted Paul Waldman and Greg Sargent in The Washington Post.

This is likely the way the impeachment trial will continue to proceed: With Democrats placing their faith in their case that Trump sought to enlist a foreign power to smear a domestic adversary, and Republicans continuing to fight the trial as a cable news spectacle.