Teen climate activist Greta Thunberg and President Donald Trump are due to face off again, this time at the World Economic Forum’s annual meeting at Davos, Switzerland.

Both are scheduled to give speeches on Tuesday, the first day of the summit.

Air Force One arrived at Zurich Airport around 8:50 a.m. CET Tuesday. The president then took a helicopter to Davos, The Guardian reported.

This will be the second time the 17-year-old and 73-year-old come face to face. Last time they met was in September 2019, during the UN General Assembly in New York.

There Thunberg stared down Trump from a distance as he and his entourage walked past. She did not attempt to speak to him, and he did not appear to see her at all.

Thunberg has said multiple times she has no plans to meet Trump, saying there is no point because he won’t listen to her or other experts anyway.

She told the BBC’s “Today” radio program last month that if she saw Trump at the UN climate summit in December, she would not have spoken to him.

“Honestly, I don’t think I would have said anything because obviously he’s not listening to scientists and experts, so why would he listen to me?” she said.

Trump announced the US withdrawal from the landmark 2015 Paris climate agreement in his first year in office.

Earlier this month The New York Times also outlined plans from this administration to end requirements for federal agencies to take climate change into account when they assess the environmental impacts of infrastructure projects. 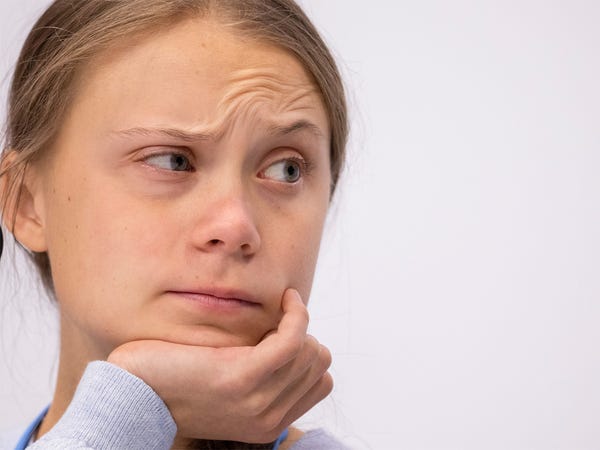 Trump has also patronized Thunberg on Twitter, to which Thunberg responded by trolling him back.

After seeing her impassioned speech at the UN General Assembly in September, Trump tweeted: “She seems like a very happy young girl looking forward to a bright and wonderful future. So nice to see!”

In December, Trump also responded to Thunberg’s being named Time magazine’s 2019 Person of the Year by tweeting that she should “work on her Anger Management problem, then go to a good old fashioned movie with a friend! Chill Greta, Chill!”

Immediately afterward, she changed her bio to: “A teenager working on her anger management problem. Currently chilling and watching a good old fashioned movie with a friend.”

One of the biggest themes of this year’s summit, which ends Friday, is the climate crisis.

However, many of the financial, political, and celebrity elites traveling to the event will continue to travel there by private jet, which is hugely damaging to the environment.

Thunberg has vowed never to take planes because of their carbon emissions, and usually only takes trains to travel. Last year she sailed across the Atlantic Ocean for two weeks from Plymouth, England, to New York City to visit the Americas.