A mysterious virus has now killed six people in China, state media reported Tuesday, as authorities constantly revise the number of people that are infected.

This map shows where cases have been confirmed, with the orange circle representing the city of Wuhan, where the virus was first recorded at the end of last year. It is home to 11 million people. 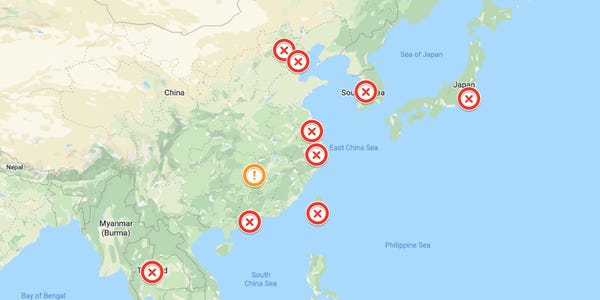 A map of the Chinese cities and other countries where cases of the virus have been confirmed. The orange circle shows Wuhan, China, where the virus was first recorded.

Here is where is represented on the map, and how many cases have been recorded there as of Tuesday morning:

The figures are being regularly updated as individual regions report separately from the National Health Commission.

Other countries, including Singapore and the Philippines, have reported suspected cases, as have other parts of China.

Some experts believe that the number of those infected could be higher: When China claimed 45 people had been infected earlier this month, academics from Imperial College London suggested the true number of infected people was somewhere around 1,700.

Health authorities in Hong Kong, Singapore, and Tokyo are screening passengers flying in from Wuhan at airports, and the US Centers for Disease Control and Prevention (CDC) is doing so at airports in New York, Los Angeles, San Francisco. 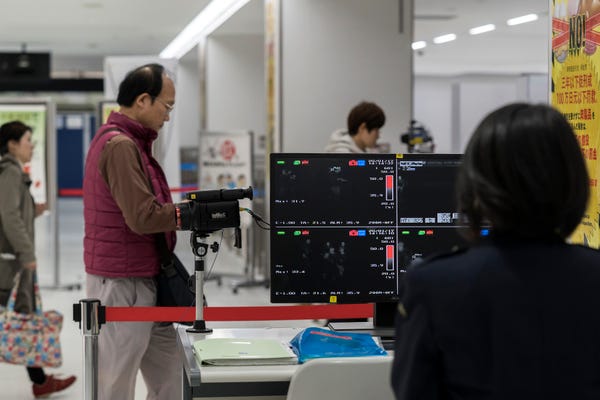 A health worker monitors a thermal scanner as passengers arrive at Narita airport on January 17, 2020 in Narita, Japan.

The virus, called 2019-nCoV, was first detected in the city of Wuhan, central China, at the end of 2018. As it is a new strain of coronavirus — which is one that infects the nose, throat, or sinuses — that has not been seen by humans before, scientists are scrambling to understand the treat it.

Authorities on Monday said the virus can spread from one human to another, having previously said that they believed it could only spread from animals to humans.

Fears that the virus could spread further are heightened as hundreds of millions of Chinese people prepare to travel to mark the weeks-long Chinese New Year celebration — travelling around the country and the world, often in crowded trains and planes.

The World Health Organization said it will hold a meeting on Wednesday to decide whether to declare “a public health emergency of international concern,” and what recommendations to make. It has previously declared such an emergency for swine flu and Ebola.

Quarantine may have helped spread…

Coronavirus quarantine: US to evacuate…

Can a Database of Animal…

We will survive coronavirus, but…