Latest News
Home /N.J. winter storm update: When will the snow start? Will it change to sleet and rain? Will some areas get 6 i

STORM UPDATE (Saturday morning): Here’s when the snow will begin and end on Saturday

A fast-moving winter storm will sweep across New Jersey this weekend, bringing a sloppy mix of snow, sleet and rain to our region Saturday and heavy snow to northern New England.

Here’s the latest information about the storm’s timing, how much snow will fall and what areas of the Garden State will likely see more rain than frozen precipitation.

When will the snow start?

Some snow flurries could be flying around early Saturday morning, when temperatures will be in the 20s and clouds start moving in. But steadier light snow is expected to start falling in northern, central and western New Jersey between 10 a.m. and noon, with the storm moving from west to east.

Will the snow change to sleet and rain?

Forecasters from the National Weather Service say snow may mix with sleet or rain during the late afternoon and evening in northern New Jersey — especially south of Interstate 78 — before tapering off Saturday night.

In areas along the Interstate 95 corridor, the snow is more likely to transition to a wintry mix, then rain by late afternoon or evening. In those places, “light snow accumulations are possible initially, but warming surface temperatures are expected to preclude significant impacts,” the weather service notes.

Areas along the Jersey Shore and in far southern New Jersey will likely get a brief batch of snow, but temperatures in the afternoon are expected to quickly rise above the freezing mark of 32 degrees. That will turn the snow to rain, with some sleet mixing in at times. New Jersey faces a sloppy mix of snow, sleet and rain Saturday, thanks to a fast-moving winter storm that is expected to dump heavy snow in northern New England.AccuWeather

How much snow will accumulate?

Two to 3 inches of snow is expected for most of Mercer and Middlesex, along with southern sections of Hunterdon and southern Somerset. However, the transition to sleet and rain Saturday evening could push those numbers down.

The lower half of New Jersey is likely to get less than 1 inch of accumulating snow, because of the warmer air drifting in from the south and west as the storm moves through. 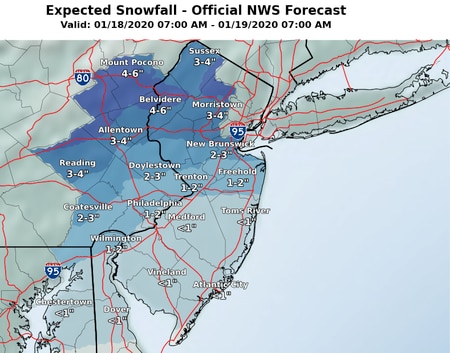 When will the snow be heaviest?

Most forecasters expect the heaviest precipitation to fall Saturday during the mid-afternoon, late afternoon and early evening.

Will the roads be bad for driving?

As we all know from experience, it only takes a little bit of snow or sleet to make roads slick, especially side streets that haven’t been treated. The National Weather Service is advising drivers to ”slow down and use caution while traveling.”

Forecasters from AccuWeather say road conditions “may deteriorate quickly on Saturday. Even though the period of snow and wintry mix may be brief from Pennsylvania, New Jersey and southeastern New York on south and west, the precipitation may come down hard for a while.”

Should we expect power outages?

Only light winds are anticipated Saturday and Saturday night, so without any major snow or ice accumulations on trees or power lines, widespread power outages are unlikely in New Jersey. Winds are expected to increase Sunday, after the storm system moves away, with gusts reaching 30 to 35 mph. So, despite the sunshine and temperatures around 40 degrees, Sunday is shaping up to be a cold and blustery day.

Have any winter storm warnings been issued?

The National Weather Service has issued a winter weather advisory — which is not as urgent as a winter storm warning — for 12 of the state’s 21 counties: Bergen, Essex, Hudson, Hunterdon, Mercer, Middlesex, Morris, Passaic, Somerset, Sussex, Union and Warren. The advisory is effective from 10 a.m. Saturday to 1 a.m. Sunday.

Prior to this weekend, New Jersey has had several rain storms and some brief snow showers and snow squalls in January, but no winter storms with widespread snow accumulations. The state’s biggest snowstorm of the season occurred in early December, when 6 to 12 inches of snow fell in the northern counties.

The state’s main weather reporting station — Newark Liberty International Airport — has measured less than 1 inch of snow during the first 17 days of this month. Newark normally gets about 8 inches of snow during the entire month of January. 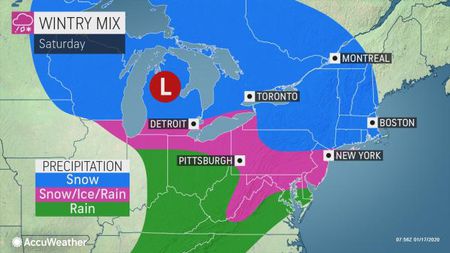 New Jersey faces a sloppy mix of snow, sleet and rain Saturday, thanks to a fast-moving winter storm that is expected to dump heavy snow in northern New England.AccuWeather

More rain expected for the…

Rain in the forecast for…

Tracking the coldest air so…

Coldest air of the season…

Storm moving across country with…

Flood alerts in South as…

New storms on the way…

Storms to slam the West…

Storm moving out in east,…