Iran’s police denied shooting at protesters on Monday as fury over the country shooting down a commercial plane, killing dozens of its own citizens, brought people on the streets over the weekend.

Protests and vigils began in Iran on Saturday and continued on Sunday, sparked by the government admitting that it shot down Ukrainian Flight 752 in error, killing all 176 people on board after days of denials.

Witnesses told the UK’s Guardian newspaper that security forces used tear gas and live ammunition in the protests, which took aim at the country’s leadership.

Videos circulated on social media appeared to show protesters chanting anti-government slogans, including “They are lying that our enemy is America, our enemy is right here” and “Death to the dictator!,” referring to Iran’s Supreme Leader Ali Khamenei, who has been in power since 1989.

Other videos showed the sound of gunshots and people who apparently injured being carried by others. Reuters said it could not authenticate the footage.

According to Reuters, footage showed blood on the ground and what appeared to be security force members running with rifles.

Screenshots published by the Associated Press show moments taken from the footage, which can be seen below:

(WARNING: One of the photographs below shows large amounts of what appears to be blood) 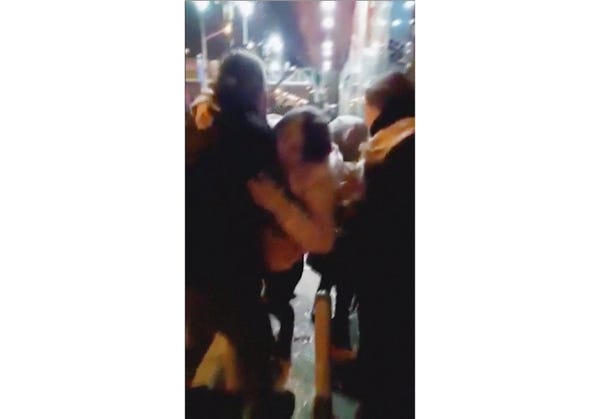 Protesters carry an injured woman to the sidewalk’s edge near Azadi Square, in Tehran, Iran, in a screenshot from a video. 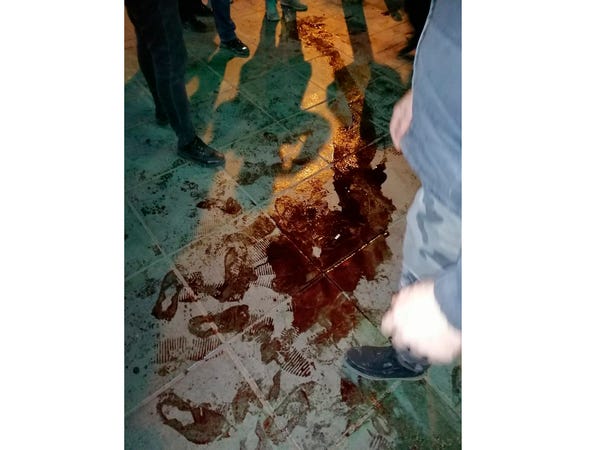 n this image made from video, protesters carry an injured woman to the sidewalk’s edge near Azadi Square, in Tehran, Iran.

Hossein Rahimi, head of the Tehran police, said in a statement that the police did not shoot: “At protests, police absolutely did not shoot because the capital’s police officers have been given orders to show restraint.”

But according to the BBC, a different types of security forces were present at demonstrations. The outlet listed riot police, the Revolutionary Guard, and plainclothes security officials.

Iranian students demonstrate following a tribute for the victims of Ukraine International Airlines flight in Tehran on Saturday.

Witnesses at the demonstrations told The Guardian that protesters were met with tear gas and live ammunition.

One woman, who asked not to be identified, said of security forces: “They were firing tear gas repeatedly, we couldn’t see anywhere and we were screaming. We were getting blinded. Forces were firing tear gas back to back. A young girl beside me was shot in the leg. It was terrible, terrible.”

Another video seen by The Guardian, although the newspaper could not independently verify it, featured a man saying: “I saw seven people shot. There is blood everywhere.”

Another unverified video shows people who appear to be lying injured and a woman lying on a bloodied sidewalk while a man says “They shot her with a bullet,” The Guardian reported. 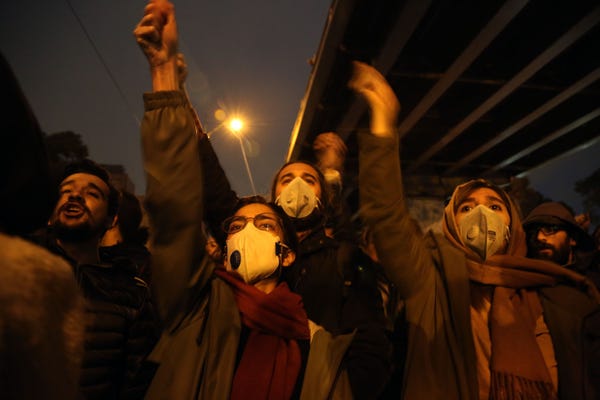 Iranians shout slogans against the government on Saturday.

State media outlet IRNA said that the protests had spread outside the capital of Tehran, and to other cities around the country.

The protests began after Iran admitted on Saturday to “unintentionally” shooting down the Ukraine International Airlines plane, after days of dismissing the idea it had shot it with a missile as “lies.”

IRNA reported that a government spokesperson said government officials were unaware of the reason the plane crashed until Friday evening. The downing took place amid heightened military tension in Iran, hours after it fired missiles at bases housing US troops in retaliation against the US assassination of the country’s top military leader. 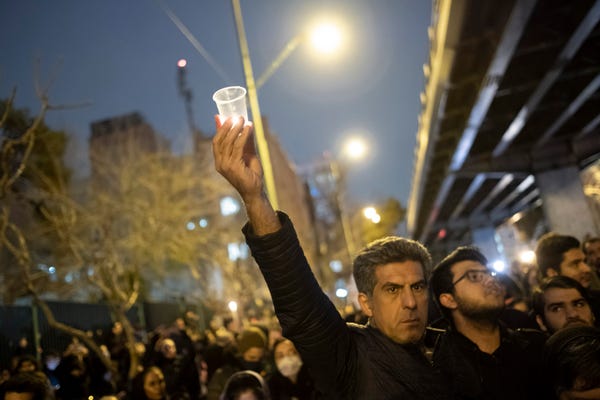 An Iranian man lights candle in memory of the victims of the plane crash.

But the protests have taken aim at these officials, prompting the head of the Revolutionary Guards to call for Iranians to unite against the US.

“We are at war with the United States,” Hossein Salami said.

The BBC noted that protesters are demonstrating despite the knowledge of what has happened to demonstrators in Iran in the past. Experts believe that the country killed hundreds of protesters at the end of last year during protests over gas prices, though Iran disputes the claim.

Iran’s state TV acknowledged that protesters were killed, but did not give figures.

US President Donald Trump urged Iran multiple times on Twitter on Sunday not to kill protesters.

In one tweet, he wrote: “To the leaders of Iran – DO NOT KILL YOUR PROTESTERS. Thousands have already been killed or imprisoned by you, and the World is watching. More importantly, the USA is watching. Turn your internet back on and let reporters roam free! Stop the killing of your great Iranian people!”

The UK’s ambassador to Iran, Rob Macaire, said he was detained for half an hour on Saturday after attending a vigil for the plane crash victims, some of whom were from the UK.

Macaire said he left after the vigil began to turn into a protest, and the UK’s foreign minister accused Iran of detaining the diplomat “without grounds or explanation.”

China Thought It Had Beaten…