A former WeWorker repeated the phrase to her friend as they walked into a New York networking event on Wednesday morning, two weeks after the company’s major job cuts hit the US.

The 2,400 employees who were laid off are receiving four months of compensation in the US, but many aren’t waiting to start job hunting. Eyeing a hiring cycle that tends to slow down before the holidays, then ramps up in January, employees said they were networking now with the hope of landing something early next quarter.

WeWork’s laid-off employees represent a flood of talent in a market with record-low unemployment, and recruiters have been circling some employees, particularly in engineering, for weeks, or even months. Some former WeWorkers said they were waiting out their garden leave, spending the next weeks traveling or relaxing before they start a job they lined up even before they were officially cut.

Others are leaning on networks, online and offline, for support. When the cuts hit, LinkedIn was flooded with supportive messages from entrepreneurs and WeWorkers, some of whom left the company years ago, offering to open their networks. One started a Google spreadsheet called #WeAreWeWork to share available roles at companies including Amazon and startups, as well as colleagues’ information. Two weeks later, the sheet has 200 names and 800 open jobs, along with specific WeWork contacts.

On Wednesday morning, about 65 former employees and recruiters gathered at a Chelsea, Manhattan, restaurant for a speed-networking event so popular that it had a waitlist. The event, called Soft Landing, was organized by two startups, KettleSpace and the talent company Uncubed.

KettleSpace, which hosts coworking spaces in 13 New York restaurants, was cofounded by the former WeWorker Dan Rosenzweig and the restaurateur Nick Iovacchini. 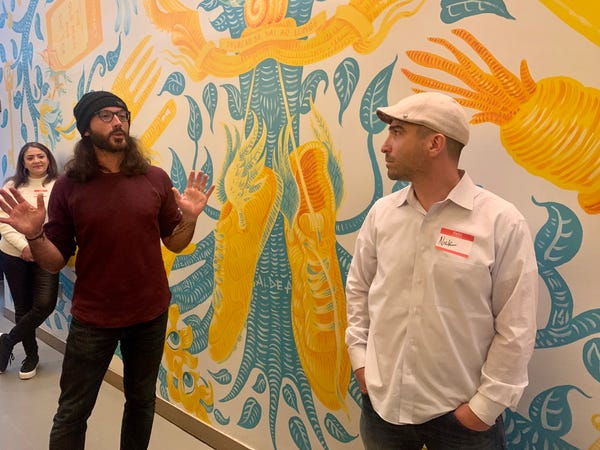 “The world needs more communities coming together when things get hard,” Iovacchini told Business Insider. “We feel a sense of like-mindedness with many of the folks who were at WeWork … people who worked hard and believed in a vision.”

The 15 companies at the Wednesday event, which organizers hope can be the first in a series, included the real-estate-technology company VTS and the data company CB Insights. Event attendees also received a free three-month membership to KettleSpace, giving them a space to work as they look for a new role — or to start a new company — and free coaching from the career coach GoCoach.

“I don’t think [former WeWorkers] are going to be wanting for work, but they probably don’t want to learn about companies constantly when they can come to breakfast and learn about a chunk of them over three hours,” Pertew said. “It’s going to feel like your career search is already activated nicely, on the back of a pretty gnarly event.”

Kristin Luciano, a WeWork lawyer who was laid off, said she was not taking a passive approach. Her first step was a public LinkedIn post after the cuts, in which she highlighted her new endeavor — a legal tech platform for influencers. The short post picked up more than 125,000 views and led to conversations with multiple recruiters and venture-capital firms, Luciano said on the sidelines of the Soft Landing event.

“It goes to show that people are not going to give you things in this world. You need to be proactive,” she said, adding that she was attending the event even though no specific legal jobs were listed. “You’re going to get a million job rejections. This is life.”

Get in touch: Contact this reporter via encrypted messaging app Signal at +1 (646) 768-1627 using a nonwork phone, email at mmorris@businessinsider.com, or Twitter DM at @MeghanEMorris. (PR pitches by email only, please.) You can also contact Business Insider securely via SecureDrop.

Evergrande stays silent on its…

Latest Shortage: Paint is getting…

PayPal the Latest Company to…

Nike CEO: We Haven’t Been…

BE AWARE: Bill Gates and…

Disney to Move Thousands of…

Jeff Bezos steps down as…