The $100 million fight between Andy Ruiz Jr. and Anthony Joshua on Saturday is ignoring some darker truths about Saudi Arabia, and boxing is burying its head in the sand by holding a massive event there regardless.

That is the opinion of Felix Jakens, a spokesman for the human-rights organization Amnesty International, who told Business Insider that Saudi Arabia was using top-tier sport, in this case a unified heavyweight world-championship fight, as an effort to eclipse negative headlines with positive ones.

“The intention is that people start to associate Saudi Arabia with excitement and sport — reconceiving it as an outward-looking, open place to visit,” Jakens, Amnesty International UK’s head of campaigns, said.

“This new public face is masking a darker truth, one where journalists face flogging for speaking negatively about the king, where children receive the death penalty for attending pro-democracy protests, and where public beheadings are a routine part of life.

“That’s the Saudi Arabia Anthony Joshua and Eddie Hearn,” the fight’s promoter, “are visiting — and they should be prepared to say so.”

The only problem is they are not saying so. Not really.

Two months ago, Joshua simply said he was “there to fight,” according to The Guardian.

He added that he could act as a spokesman, building a relationship with Saudi Arabia instead of “accusing, pointing fingers, and shouting from Great Britain.” 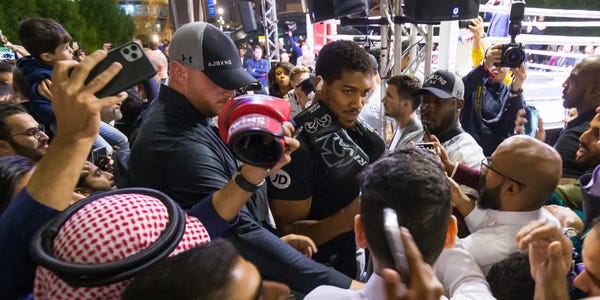 Speaking with Business Insider last week, Hearn said the nation “definitely has its issues that it needs to overcome.” But he stressed his No. 1 priority was to maximize the earnings of his star client, Joshua.

Those earnings, according to the Daily Mail boxing reporter Jeff Powell, will see Joshua bank a career-high payday of $85 million. Ruiz is expected to earn approximately $13 million.

In this respect, Hearn has done his job.

‘Not the most ethical sport’

Hearn told us boxing was “not the most ethical sport in the world,” given what happens in the ring. “You’re not looking into the sport,” he said. “This is boxing. This is a fight. This is the most barbaric of sports where people can die. Boxing trumps everything in terms of what’s right and what’s wrong.”

He added: “Imagine I went to Joshua, ‘This is the deal for Saudi,’ which I did, and he went, and everyone says, ‘When we going?’ But then I say, ‘I’m afraid I’m not comfortable.’

Hearn said there were two ways for his sport to generate huge sums of money. You can either build interest in an event so it is a must-see pay-per-view show, like the 2015 fight between Floyd Mayweather Jr. and Manny Pacquiao, or you go to a country where they pay you a massive site fee.

Places like Madison Square Garden in New York, the MGM Grand in Las Vegas, or The O2 arena in London carry history and prestige, but when you go to places that are, in Hearn’s words, “quirky and controversial,” they have to compete somehow, and that is done with a payment that dwarfs what is on offer elsewhere. 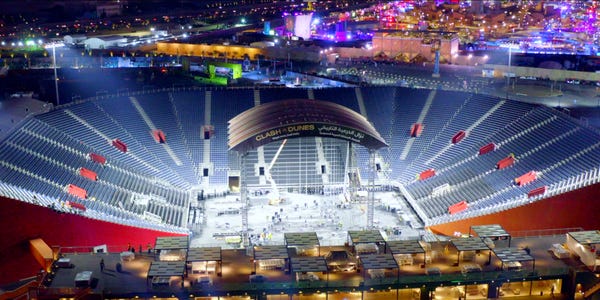 The purpose-built arena for the Clash on the Dunes.

“Boxing is self-sufficient in terms of demand versus money you’re bringing in, but in terms of reaching that next level of earning, the only way that happens is if there’s a mega, mega-fight with US pay-per-view or there’s a site fee from a new kind of territory,” Hearn said.

“And in this instance it’s Saudi. My job is to provide opportunities to my fighters. Do you think fighters who are taking part in a sport where they could potentially lose their life are particularly conscious of a current-affairs issue of the country they are boxing in? With all due respect, if you think they should even consider that, then I think you’re a plonker.”

Interest in the Ruiz-Joshua rematch is massive, as it will be either a case of repeat for Ruiz, who won the June fight in style, or revenge for Joshua, who will be seeking to reverse the earlier result and get his career back on track.

It is a fight that would have most likely sold out Wembley Arena in London or the Garden. Perhaps, even, a neutral venue in a country that does not, in Amnesty’s words, flog journalists, punish young pro-democracy protesters with death, and hold public beheadings.

So why not go to one of those venues? “For much less money, therefore not providing opportunity for my client?” Hearn said. “That’s what you got to think about. I can’t go to my client and go, ‘Right, you could make life-changing money, generational wealth, but I’m uncomfortable and don’t think you should do it.’ They’d go, ‘F— you, I’m going.'”

Is Hearn bringing boxing a step closer to the world’s worst people?

Karim Zidan, who writes about the intersection of politics and sport for The Guardian and Bloody Elbow, has reported on the relationship between the world-leading mixed martial arts firm UFC and Ramzan Kadyrov, the warlord in control of Chechnya whose administration oversees enforced disappearances and extrajudicial killings.

There is also a “near-total repression of critics, journalists, and LGBT people” in his region, according to Human Rights Watch.

Kadyrov is seen octagonside at some UFC events and is also rarely far from one of the UFC’s greatest active athletes, the unbeaten wrestler and lightweight champion Khabib Nurmagomedov.

Zidan wrote in The Guardian last year that Kadyrov supplied fighters to the UFC through his Dagestan fight club Akhmat MMA.

“Kadyrov uses sports to enhance his cult of personality and bolster his reputation as a benevolent leader who enjoys sports,” Zidan said.

He also wrote: “While the UFC is aware of the controversy surrounding the Chechen dictator and the UFC fighters who represent him, the promotion has chosen to remain silent regarding this potential public relations nightmare.” 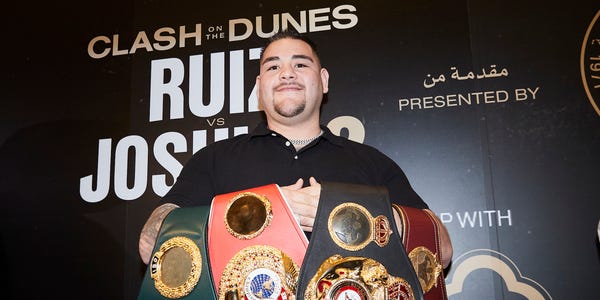 In Saturday’s rematch, Andy Ruiz Jr. will defend the world titles he won after beating Joshua in June.

Business Insider asked Hearn whether he was bringing his sport one step closer to people like this, considering Saudi Arabia’s record of human-rights abuses.

Earlier this year, Insider’s Bill Bostock revealed that Saudi Arabia ran a huge, sinister online database of women that men used to track them and stop them from running away. It was an app available on Google and Apple, but both later stopped hosting it on their platforms. Saudi Arabia, too, updated its laws because of the reporting.

Hearn said that Saudi Arabia definitely had issues but that women could “drive on their own” and “attend events” and that “there’s women traveling to the show, both from outside the country and internally.”

He described the country’s human-rights record as “not good” but said Kadyrov was shadier than the Saudis. “It’s not underworld, is it?” he said. “I know they’ve got their issues, but it is government, and it is royalty.

Amnesty International has a message regarding what the Saudi government is like, though. “It’s a government which prefers to lock up its critics rather than listen to them,” Jakens said.

This is an attempt at ‘sportswashing’ — an effort to ‘reposition’ the very damaged Saudi brand though the prestige of top-tier sport.

He added that Hearn was right to say the country allowed women to drive without fear of arrest and that there’s an easing of its “guardianship system,” meaning women over 21 could travel without the permission of a man.

“But there’s still fundamental discrimination against women in the country,” he said. “Women still require a male guardian’s approval to marry. If they’ve been sent to prison, they still need their guardian’s permission to be even be released. There is no prohibition against marital or statutory rape, and rape victims are frequently charged with adultery.

“And a number of the very brave women activists who campaigned — at some considerable risk — for the right to drive have, for their pains, been arrested and charged in relation to their human-rights work. These include Loujain al-Hathloul, Samar Badawi, and Nassima al-Sada.

“This is an attempt at ‘sportswashing’ — an effort to ‘reposition’ the very damaged Saudi brand though the reflected glamour, excitement, and prestige of top-tier sport.”

“We’ve never said that Joshua or Ruiz should refuse to fight in Riyadh,” Jakens added. “We’ve just called on them to show some awareness and speak out about the human-rights situation that is, after all, very likely the underlying reason for the fight taking place in Saudi Arabia in the first place.”

NFL Draft could get shaken…