NATO leaders are preparing to meet in the UK on Tuesday for a special 70th anniversary summit — which could end up being more awkward than celebratory.

The military alliance has come a long way since it was first set up to protect Western countries from the Soviet Union in 1949. Now it looks like it could be fraying on the edges.

The group will meet in London on Tuesday, which involves an event at Buckingham Palace, before heading to the luxury Grove Hotel in Watford, a town northwest of London, for meetings on Wednesday, according to an official schedule.

It comes as some of its most powerful members openly fight with each other and undermining the strength of the organization, and Russia edges closer to the West.

Here’s a rundown of what has happened in the past two months alone:

Boris Johnson told Trump to butt out of his election

On Friday, UK Prime Minister Boris Johnson told President Donald Trump — his staunch ally in the US-UK “special relationship” and the leader of NATO’s most powerful member — to stay out of the upcoming general election, due to take place on December 12.

“We have very close relationships and friendships with the United States at every level of government, but what we don’t do traditionally as loving allies and friends … is get involved in each other’s election campaigns,” Johnson said on Friday, when asked on LBC radio whether Trump’s support was “welcome.”

“It’s best when you have close friends and allies like the US and the UK … for neither side to be involved in other’s election campaigns.”

Trump endorsed Johnson in October, calling him “the exact right guy for the times” on LBC radio — prompting criticism that he was interfering in UK politics.

He also said Johnson’s opposition, Labour leader Jeremy Corbyn, would be “so bad for your country.”

Trump abruptly pulled US troops out of northeastern Syria in early October, paving the way for Turkey to invade the country and fight the People’s Protection Units (YPG), a Kurdish-led militia that had fought ISIS alongside the Americans.

The Turkish military incursion dramatically decreased the effectiveness of counterterrorism operations in the region, and President Recep Tayyip Erdogan refused to back out until the Kurds were eliminated.

In the absence of US leadership in Syria, Russian President Vladimir Putin swooped in and brokered a plan to jointly patrol northeastern Syria with Turkey, establishing itself as a new power player in the country.

The deal also secured for Putin an ally in Turkey — a NATO member-state. Given its location between Russia and Europe, Turkey occupies a particularly precarious position between the two powers.

Turkey is also considering buying more S-400 missile-defense systems from Russia, which the US has long warned against for fears of Russia getting access to sensitive technical details about the US’ F-35 fighter jet program.

Last week, the Royal United Services Institute think tank reported that the UK and its NATO allies would lose to Russia if they were to go to war as they are “comprehensively outgunned and outranged.” 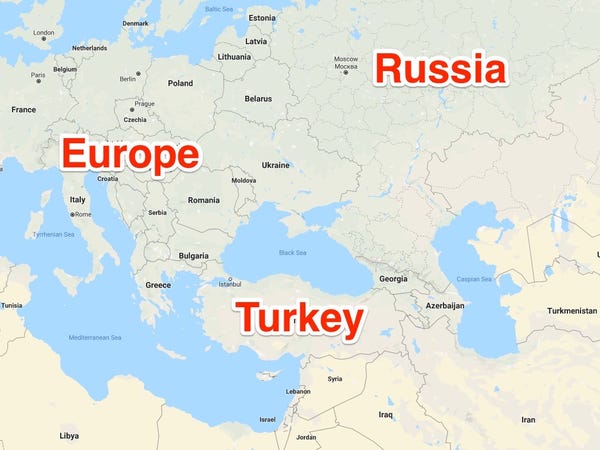 Map showing Europe and Russia, and Turkey acting as a buffer between them.

French President Emmanuel Macron slammed Trump last month for pulling US troops out of northwestern Syria in early October without telling his NATO allies, many of which still have forces in the country.

“You have no co-ordination whatsoever of strategic decision-making between the United States and its NATO allies. None,” Macron told The Economist in an article published in early November, referring to the troop withdrawal.

He also slammed Turkey’s incursion into Syria, telling the magazine: “You have an uncoordinated aggressive action by another NATO ally, Turkey, in an area where our interests are at stake,” adding that this problem represents “the brain-death of NATO.”

German Chancellor Angela Merkel lashed out at Macron, telling him in Brussels in late November according to The New York Times: “I understand your desire for disruptive politics … But I’m tired of picking up the pieces. Over and over, I have to glue together the cups you have broken so that we can then sit down and have a cup of tea together.”

Erdogan also slammed Macron’s comments as “sick and shallow” last Friday, adding, according to Reuters: “I’m addressing Mr Macron from Turkey and I will say it at NATO: You should check whether you are brain dead first.”

Members go in with different priorities

Trump will prioritize getting NATO to push back against China’s influence, Bloomberg reported on Sunday, citing an unnamed senior US official. However, Macron wants to increase NATO’s fight against terrorism.

Trump could also continue to attack NATO and what he has long characterized as the US’ outsized financial role in the alliance.

NATO on Thursday announced to reduce the US annual contribution to the alliance in a likely effort to appease Trump, Business Insider’s John Haltiwanger reported last week.

The US will now equally pay 16% of NATO’s central budget of $2.5 billion, like Germany — a decrease from 22% in previous years.

As former US National Security Council official Kori Schake told Bloomberg: “It will be a great tribute to how much all the NATO allies value the institution if we manage to get through this leaders meeting without President Trump, President Macron or President Erdogan doing something damaging to the alliance.”

Iran announces arrests over its…

Iran vows to punish those…