China’s image has taken a beating this week. Over the past few days the world’s second largest economy has faced down a series of embarrassing international incidents, including: 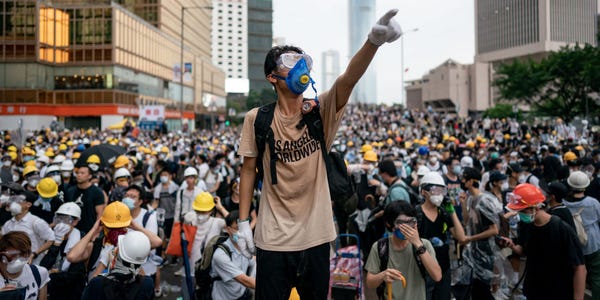 A protester in downtown Hong Kong in June 2019.

These are highly embarrassing to China’s international image, which the country has been trying to build up for years through investing in Hollywood films, opening Chinese-language schools around the world, and buying up well-placed propaganda ads in prominent Western newspapers.

This week’s events might have forced another country to retreat on its actions in favor of a better image on the international stage. But China probably doesn’t care about its latest spate of bad press. 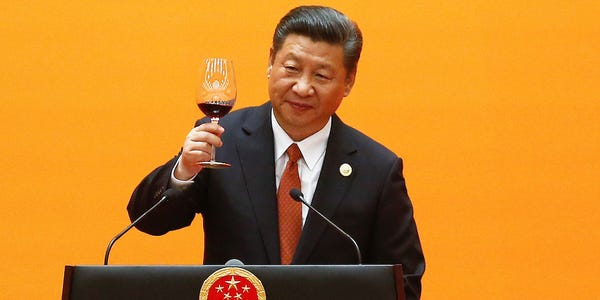 Xi Jinping makes a toast at the Great Hall of the People in Beijing, China, in May 2017.

China says leaked files on Uighur oppression are ‘worth learning from’

Shortly after The Times published the leaked documents, China appeared to show no effort to push back on the report, simply brushing the story off as “entirely collusion and fabrication by domestic and foreign hostile forces,” and saying its tactics in the region were “worth learning from.”

Lijian Zhao, a senior spokesman at China’s Foreign Ministry, also tweeted in response to The Times’ story: “China deserves a big like for showing how to deal effectively with terrorism & extremism in Xinjiang. Toughness & prosperity are a great combination!” 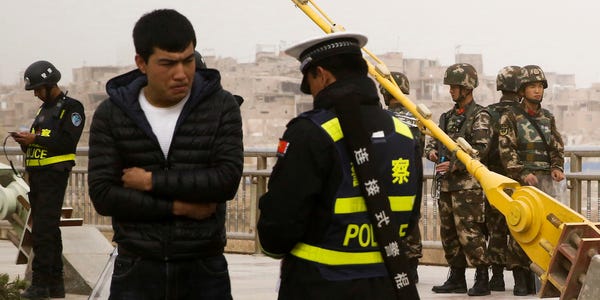 China’s brazen refusal to retreat on Xinjiang appears to be a result of the impotence of Western condemnation.

Not a single Muslim country is standing up to China’s actions in Xinjiang, likely to protect economic partnerships. Earlier this year 22 countries wrote a joint letter condemning China’s human-rights record — only to be rebutted by 37 other countries, including North Korea and Syria, writing another letter praising it.

In October the US blacklisted 28 Chinese companies for their role in surveilling and detaining minorities in Xinjiang, but there has been no evidence of change in China’s actions yet, suggesting the sanctions haven’t worked.

According to the leaked documents, Xi had urged party officials to ignore criticism of the Xinjiang crackdown as early as 2014, telling a closed-door meeting: “Don’t be afraid if hostile forces whine, or if hostile forces malign the image of Xinjiang.” 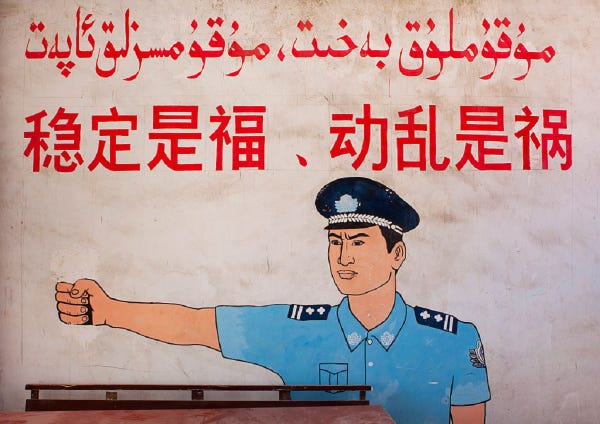 A sign in Yarkand, Xinjiang, that says in Uighur and Chinese: “Stability is a blessing, Instability is a calamity.”

Meanwhile, President Donald Trump is yet to sign the Senate and House bills into law. The president has ten days to approve or disapprove bills — which would normally give him a deadline of December 2 — but that deadline will be suspended when Congress adjourns for Thanksgiving next week. 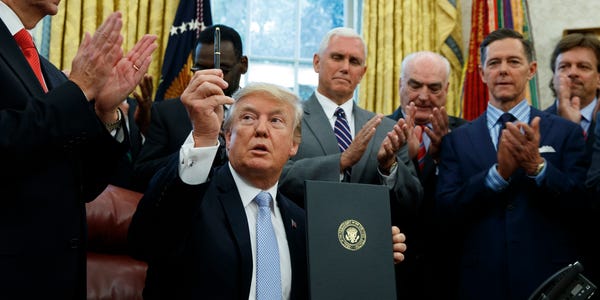 President Donald Trump holds up a pen in the White House Oval Office in September 2017.

Trump signing the bills to protect Hong Kong protesters against China is not guaranteed.

He even suggested on Friday that he could veto the legislation in favor of a trade deal, telling Fox & Friends: “We have to stand with Hong Kong, but I’m also standing with President Xi … But we are also in the process of making one of the largest trade deals in history.”

He has also reportedly promised China to mute US support for protests in favor of progress in trade talks in the past.

In June, Vice President Mike Pence canceled a speech poised to criticize China’s Uighur policy one week before Trump and Xi were due to meet in Osaka, Japan, to ensure good relations between the two leaders.

In July, a US official in Hong Kong was also forced to tone down a “kick-ass” speech about China’s erosion of Hong Kong’s freedoms due to the US’ attempts at the time to hammer out a trade deal, the Financial Times reported at the time.

Negotiators from the two countries are currently trying to hammer out an agreement ahead of a December 15 deadline on tariff escalations, and Trump could be loathe to jeopardize that. 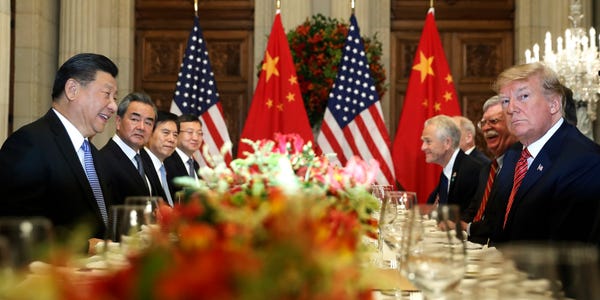 Xi and Trump during their bilateral meeting at the G20 Summit in Buenos Aires, Argentina, in December 2018.

Tuvalu’s refusal of China’s infrastructure offer, and refusal to drop Taiwan as a diplomatic ally, is embarrassing to Xi but likely won’t jeopardize his BRI or goal to isolate Taiwan from the rest of the world.

Taiwan has been self-governing for decades, but Beijing continues to call it a Chinese territory. Tensions have escalated in recent years because the island nation’s president, Tsai Ing-wen, has been particularly critical of the mainland.

“It’s a no from us,” Kofe said. “We are hearing a lot of information about debt, China buying our islands and looking at setting up military bases in our part of the world. Those are things that are concerning to us.” 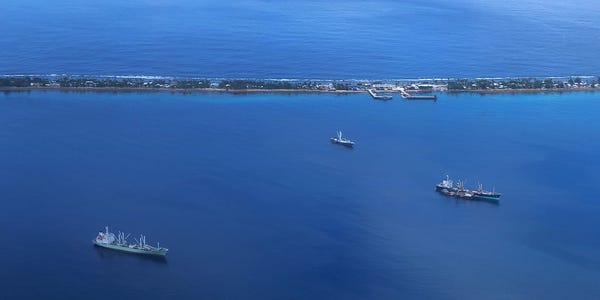 Kofe was referring to the theory of  Chinese “debt-trap diplomacy” — the strategy of extracting political concessions from a country that owes money.

Examples of this can be seen in BRI countries shunning Taiwan in favor of Chinese investment and allowing China to build military bases in those countries, both of which Tuvalu warned against.

“Tuvalu and Taiwan diplomatic ties are strongest they’ve ever been,” Kofe told Reuters. “Together with our partners, we will be able to counter the influence from mainland China,” referring to the Marshall Islands, Palau, and Nauru — Taiwan’s remaining allies in the Pacific in addition to Tuvalu, all of whom have expressed support for Taiwan in recent months. 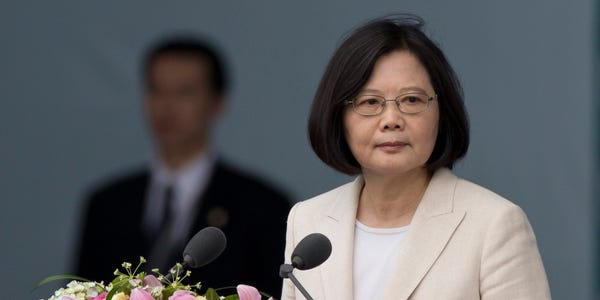 Taiwan President Tsai Ing-wen in Taipei in May 2016.

China is unlikely to flinch too hard from the Pacific islands’ rejections, though. A handful of countries have formally severed ties with Taiwan in recent months, leaving it with just 15 allies around the world — all of whom are relatively impotent on the world stage.

Meanwhile, Beijing has continued to strike BRI deals around the world, and is unlikely to stop. It has ramped up its projects and signed on new partners at such a fast pace that the US launched a new public-private initiative to increase infrastructure investment in Asia in an effort to counter the BRI.

China’s rise in the world, and at such an alarming pace, has now made it resilient to international criticism. It’s likely to plow on as usual, especially as the West continues to condemn China but refuse to take any concrete action.

Simply put, China is big enough and powerful enough that it doesn’t need to care what the rest of the world thinks of it.

Hospitals in Beirut were so…

What changed in Hong Kong…

China orders US to close…

The EU agrees a historic,…

Everything Is Fine: Boris Govt…

Princess Beatrice got married in…

Iran could flood the market…