Gordon Sondland, the US ambassador to the European Union, is facing mounting pressure as testimony from multiple officials paints him as a key part of President Donald Trump’s dealings with Ukraine.

Bill Taylor, the top US diplomat in Ukraine, publicly testified last week that a US official overheard Sondland on the phone with Trump outside a restaurant in central Kyiv discussing the Ukrainian president’s willingness to pursue investigations into other political figures.

Taylor said the phone call took place July 26, one day after Trump’s phone call with Ukrainian President Volodymyr Zelensky that sparked the whistleblower complaint that led to the impeachment inquiry.

House Democrats launched the inquiry amid concerns that Trump acted inappropriately in pushing for a foreign power to investigate former Vice President Joe Biden and his son Hunter. The details laid out by the whistleblower have almost all been corroborated in officials’ testimony as well as a White House summary of Trump’s call.

David Holmes, a US Embassy staffer who was sitting at the restaurant table during the call, testified to House investigators on Friday that he overheard a conversation between Sondland and Trump that centered on Zelensky bowing to Trump’s wishes for a politically charged investigation.

“Sondland told Trump that Zelensky ‘loves your ass,'” Holmes said in his opening statement. “I then heard President Trump ask, ‘So, he’s gonna do the investigation?’ Ambassador Sondland replied that ‘he’s gonna do it,’ adding that President Zelensky will do ‘anything you ask him to.'”

Holmes also testified that Sondland said Trump cared only about “‘big stuff’ that benefits the president, like the ‘Biden investigation’ that Mr. Giuliani was pushing.”

The Post previously reported that Mark Sandy, the deputy associate director for national security programs at the Office of Management and Budget, said in testimony Saturday that the administration’s decision to freeze military aid to Ukraine around the time of Trump’s call with Zelensky was highly irregular and requested without any explanation. 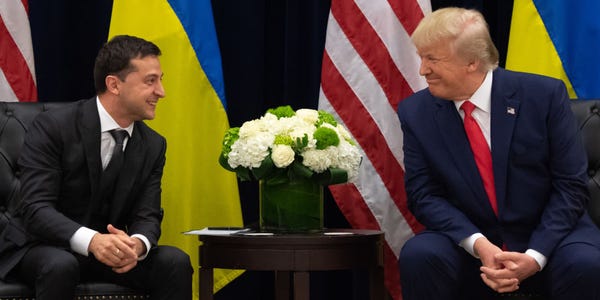 President Donald Trump and Ukrainian President Volodymyr Zelensky during a meeting in New York on September 25.

The testimony from officials stand in stark contrast to Trump’s repeated efforts to distance himself from Sondland.

According to a transcript of an October 31 deposition released Saturday, Tim Morrison, the top Russia and Europe adviser on the National Security Council, testified that Sondland spoke with Trump about six times from July 16 to September 11.

Democratic Rep. Sean Maloney, a member of the House Intelligence Committee, told George Stephanopoulos on ABC’s “This Week” on Sunday morning that the “evidence is building” against Trump in the impeachment inquiry and that he expected Sondland to confirm Trump’s dealings with Ukraine were “solicitation of a bribe” and an “impeachable offense under the Constitution.”

After days of increasing scrutiny, Sondland is scheduled to testify publicly on Wednesday.

Next in the Trump impeachment…

Attention turns to the Bidens,…

Kaine: GOP senators should at…

We will be very efficient:…