The Disney+ (Plus) logo is seen displayed on a smartphone.

Here are the most important things to know about Friday before you hit the door.

Disney posted fiscal fourth-quarter earnings after the bell on Thursday. The shares were up 3.42% in after hours trading. The company reported adjusted earnings per share of $1.07 vs. 95 cents expected, according to Refinitiv. Revenue came in at $19.1 billion vs. $19.04 billion expected, according to Refinitiv. Disney’s fiscal fourth-quarter earnings arrived just days before the company’s long-awaited streaming service, Disney+, is set to launch on November 12. The service costs $6.99 per month, or $69.99 per year, and will feature content from Disney, Pixar, Marvel, Star Wars and more.

We’ll get an early read on the health of the consumer on Friday with November’s preliminary consumer sentiment data set to release at 10:00 a.m. Sentiment in the U.S. in October came in at 95.5, higher than September’s 93.2, but below the preliminary reading and the Street estimate of 96, according to data released by the University of Michigan.

A higher reading means consumers feel more confident about current and future economic conditions. Economists polled by Dow Jones are expecting a slight fall in sentiment to a reading of 95 in November.

3. Ending a week of record highs 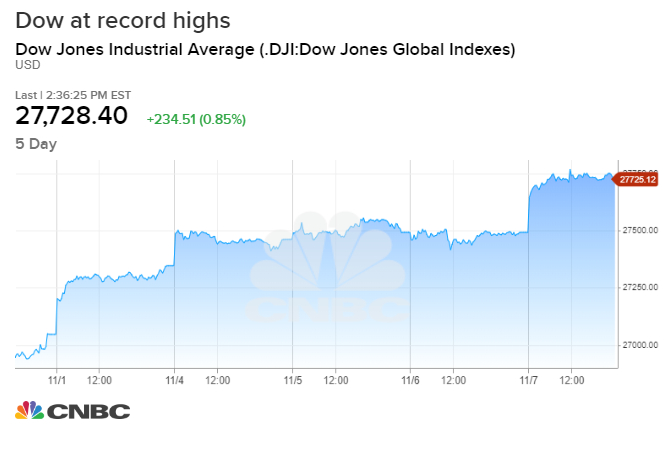 The S&P 500 is on pace to close out its fifth straight week of gains on Friday.

Allianz (before the bell)

Ameren (before the bell)

Duke Energy (before the bell)

Honda (before the bell)