Wladimir Klitschko is plotting a spectacular comeback to a sport he once dominated, the former heavyweight champion told Business Insider.

Just four weeks ago the 43-year-old was playing chess while sitting outside on the streets of Lviv.

The strategy board game is one he has long admired, having been taught how to play by his older brother Vitali when they were children.

Klitschko would go on to befriend Vladimir Kramnik, a Russian chess grandmaster, and would even play, but lose to, Garry Kasparov, one of the greatest chess players of all time, the Financial Times reported last year.

Chess excites Klitschko because “it’s a war with an army” which requires coordination, focus, and endurance, he told the FT.

Sitting at the chess table last month, Klitschko was deep in thought — he even posted a photo on Instagram which showed him plotting his next move.

Speaking to Business Insider in October, he said that next move may not be in chess at all, but in a boxing ring — Klitschko is considering a blockbuster return to competitive sport.

Klitschko has been staying sharp in the ring, away from the cameras, by sparring his countryman Oleksandr Usyk, the former undisputed cruiserweight champion who made his heavyweight debut in Chicago’s Wintrust Arena on October 12, retiring Chazz Witherspoon after seven rounds.

“I still got it. Can I fight? Yes. Right now I keep my options open,” he said. “There is going to be no comeback to come back and to break a jaw … it’s a comeback to break a record.”

One of the options available to Klitschko arrived earlier this year as the market-disrupting OTT platform DAZN, described by Bloomberg as a Netflix of sport, attempted to lure the Ukrainian back to boxing with a handsome three-fight deal worth $75 million, according to reports in The Ring and Boxing News.

So far, Klitschko has rebuffed any effort to end his retirement. But he told Business Insider it’s not about the money — if Klitschko were to come back, it would be to try and break one of the toughest records in heavyweight boxing.

“Is it appealing? I would say yeah, it’s pretty cool. George Foreman did it. He was 45 I believe when he became champion, and it’s a pretty cool statement.”

Wladimir Klitschko is living his best life in retirement 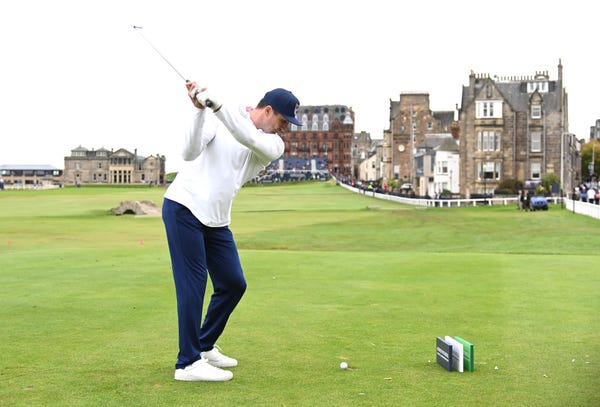 Klitschko has been living his best life since he passed the torch to Anthony Joshua in 2017, losing an up-and-down slobberknocker to a hulking fighter 13 years his junior in a title fight for the ages.

Joshua’s star grew, but Klitschko shined in defeat before announcing his retirement and going out to see the world. He travelled by a bullet train in China so sophisticated he called it a “time machine,” he golfed at the famous Old Course in St Andrews, Scotland, and he built the 11 Mirrors boutique hotel in Kiev.

Klitschko has a doctorate degree in sports science and speaks four languages fluently — Ukrainian, Russian, German, and English. Even after he had achieved so much in sport, as a 1996 gold medalist at the Olympic Games and a long-reigning heavyweight boxing champion, Klitschko was never going to spend his time idling in his post-fight career.

He’s a thinker and a doer. He studies subjects and gives seminars. And with the Klitschko family name deeply embedded in politics — Vitali is the Mayor of Kiev — you can ask Wladimir a question about anything and he will have an answer, regardless of whether that’s climate change, Brexit from a European’s perspective, or the prevalence of doping in the combative sports.

For Klitschko, every decision is about consequences — what they are, and how drastic and devastating they could be.

“Definitely, the world is changing,” Klitschko said. “Digitalization changes the world, makes it smaller. These topics are very important to stress, there are changes that human beings have been making that are not respectful to Mother Nature. The consequences, there are always consequences.”

Klitschko spoke of the need to find cleaner fuel and to use alternative energies through entrepreneurship, energies that would maintain or protect the planet rather than destroy it. “It cannot last forever if we disrespectfully treat Mother Nature,” he said. Knowing the consequences of our actions on this planet can motivate people to make the world better, Klitschko said. 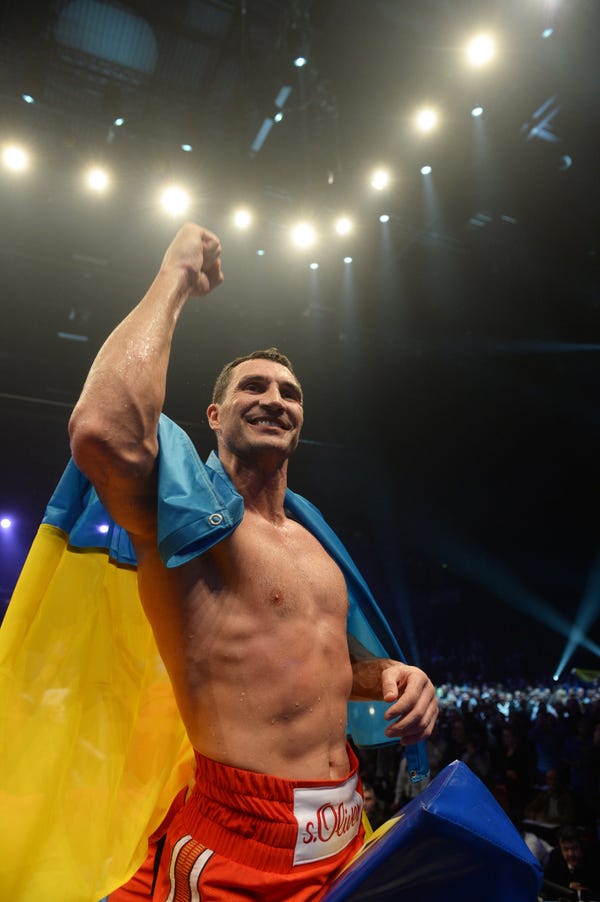 Klitschko, a Kazahk-born Ukrainian who lives in Germany, supports the EU and opposes Brexit.

On Britain’s future role outside the European Union, Klitschko said he believes people and countries are stronger and achieve more when working together, rather than by operating in isolation.

“Spread out your fingers on your hand and try to punch through the wall … your fingers are going to spread out. Your fingers represent countries,” he said.

“You put your fingers together and you have the shape of a fist, which is a good way to punch through any challenge in life, and through a wall of problems.

“You can do better with a fist when the fingers are united and come together when needed. Every country is dependent but united in other ways, a union in this case.

“I’m for Britain staying in the European Union. Understand politics and politicians, sometimes people don’t understand what they’re voting for. They don’t study what is good or gained, the consequences of Brexit, again, speaking of consequences.

“You can’t just be an island, separating yourself. You need to be part of the world. It’s better when you’re united with other allies and not just standing by yourself. That’s just my opinion, like it or not, that’s just what I think about it.”

There must also be consequences for heavyweight boxers who dope, according to Klitschko.

Five of the current top 10 active heavyweight boxers on Boxrec, a record-keeper for boxing, have tested positive for at least one banned substance in recent years.

“The technology has improved on both sides to find something in your system and also to use supplements that will probably not show on the doping list,” Klitschko said.

“We’ve seen that on a governmental level in Russia with the Olympics. It has been out there, present, and … I don’t think it’s any good for the sport.

Miller is boxing’s highest-profile doper of 2019 because of three dirty tests in a row, actions which scuppered a summer showdown against Anthony Joshua. Miller was eventually replaced by Andy Ruiz Jr.

Though Miller missed out on the opportunity to beat Joshua, he has hardly been punished. Bloody Elbow reported on Tuesday that Miller will likely fight again before the end of the year.

Klitschko said that rather than give those who dope a slap on the wrist, they should be hit with a lifetime ban. “If you’re an athlete in boxing who will possibly think about enhancing the performance, you can hurt yourself because you can absorb more punishment without going down. You could die from the shots you’ve been taking due to doping lasting 12 rounds, it doesn’t mean it’s good for you.

“It’s not good if you’re going to execute your fighting plan and you have doped and destroyed another person’s life, in the worst case.”

He went on: “Boxing must be straight and the consquences must be higher. If the consequences are okay you might think about [doing] it. If it’s a lifelong ban you better think twice about it.”

The way performance-enhancing drugs has polluted heavyweight boxing in Klitschko’s absence does not put him off a potential comeback, though.

Klitschko is targeting one of the toughest records in boxing 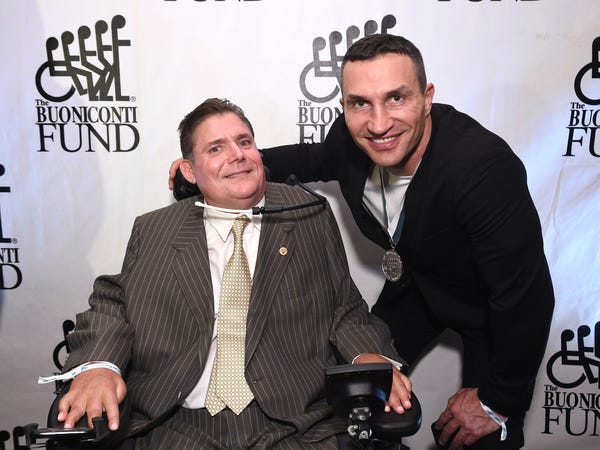 Marc Buoniconti and Wladimir Klitschko attended the Legends Reception during an event to benefit The Buoniconti Fund to cure paralysis.

Phot by Getty Images for The Buoniconti Fund To Cure Paralysis

At an October event to benefit The Buoniconti Fund to cure paralysis, Klitschko was honored as a legend amongst other notable athletes like the former three-time NBA champion Dwyane Wade, the NFL Hall of Famer Ed Reed, and MLB World Series champion Cashe Utley.

“Since I officially became a legend, it’s … a funny feeling,” Klitschko said of being honored in New York City. “I’m too young to be a legend, that’s the kind of feeling I have. Being a legend seemed to me to be someone else, not me. Much older, not me. Then eventually, boom. But it was a nice experience.”

Klitschko, though apparently modest about a legend status in the fight game, is happy to tell you he’s the most successful heavyweight of all time in terms of achievement.

He holds the record for the longest cumulative heavyweight title reign of all time having spent 4,382 days as a heavyweight world champion, defeating 23 opponents in world title fights, the most in boxing history.

A technical and intelligent athlete with a mighty record of 64 wins against five losses, Klitschko was renowned for a good jab and a hammer of a right hand which helped him deliver stategic knockouts. Klitschko hasn’t fought since 2017 but is looking to fight his 70th bout in two years’ time.

“Money is important, but what is more important at the end of the day is the memories that you collect, experiences that you’ve made,” he said. “I’ve been in boxing for 27 years, almost three decades of my life. The world is bigger, life is short, there is more to experience.”

Klitschko, perhaps surveying his future like pieces on a chessboard, is keeping his options open. He said he has no time to arrange press conference now or in two weeks, but the consequences of one last title tilt in two years? That’s checkmate.

“Will I come back just to come back in sport, no. No interest. But to break the record? Extravaganza.”

Photos of Josh Taylor’s horrific eye injury show how gruelling and unforgiving boxing can be, even when you win

Conor McGregor recently surprised beginner boxers by taking over their lesson, shouting at them, and showing them how to punch

Ireland’s next top boxer has a rare shot at retribution after losing at the Olympics because of a ‘fixed’ fight: ‘It’s personal for my career, my legacy’

A second successive loss could finish Carl Frampton, but he fights to be called Ireland’s greatest boxer: ‘It’s make or break’

Ionescu on bond with Kobe:…

Warrant issued for arrest of…