By Ariel Zilber For Dailymail.com

More than five million gamers were left dumbfounded on Sunday as the 10th season of Fortnite went out with a bang.

Fans of the hit Epic Games program wondered if their game was deleted when the island that plays host to the online battle royale was destroyed, leaving nothing but a black screen.

But the game will be back for season 11 with a brand new map, according to Forbes.

Fortnite, released by US-based Epic Games in 2017, allows up to 100 players to fight individually or as part of a team to be the last standing on a virtual battlefield.

The battlefield is active for seasons, which last for around 10 weeks at a time before a winner is crowned and the game resets. 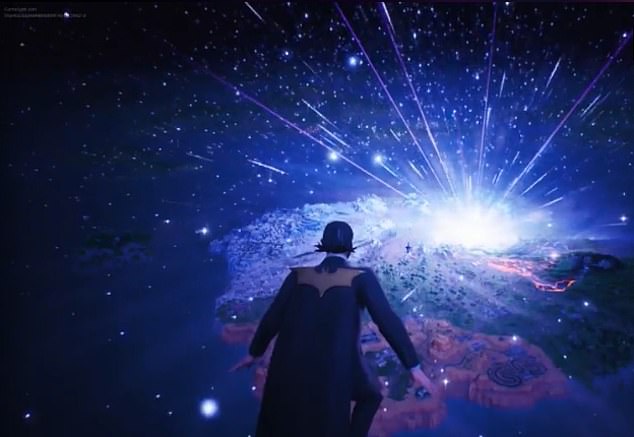 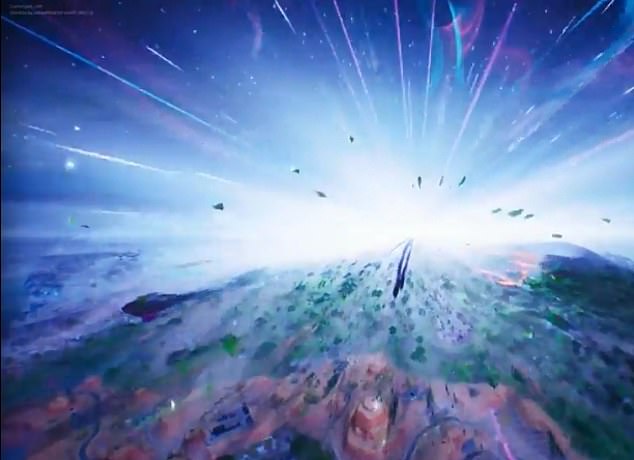 More than 5.5 million gamers witnessed ‘The End’ – the event that brought an end to season 10 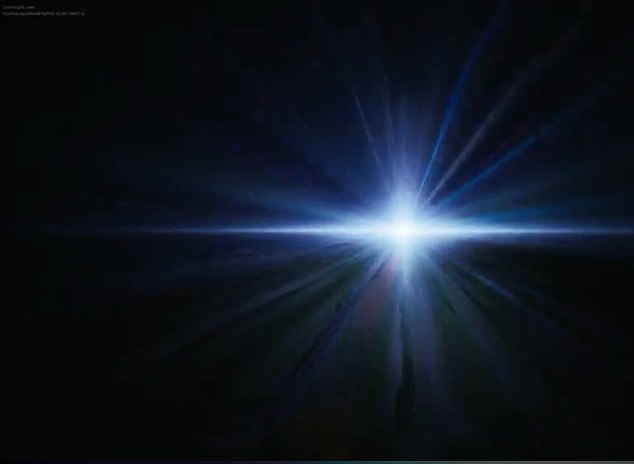 A giant meteor hit the island, destroying everything in sight and leaving nothing but a black hole

Fortnite has become the most popular online game in the world, played by some 250 million people, including in tournaments with big cash prizes.

Sunday was a special day for players, who were eager to see ‘The End’ – the event that marked the finale of this season.

A meteor struck the island, obliterating the map at around 2pm Eastern time (7pm BST).

Players who have logged into the game since then found themselves staring at a blank screen, making them wonder if the plug has been pulled entirely.

Although people play the game in groups of around 100 people, all the millions of users use the same map layout.

After 10 seasons of the previous landscape, players are now expected to use an entirely new set-up when the game comes back online. 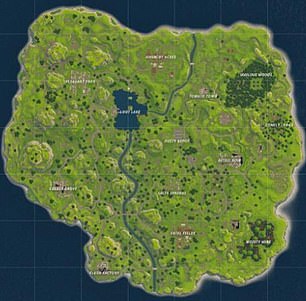 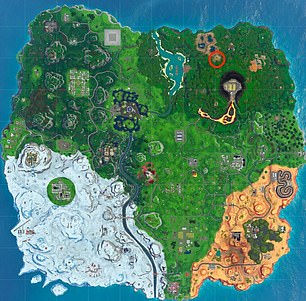 But gamers should not worry, as there will be a season 11 with an entirely new map. The old map is seen above 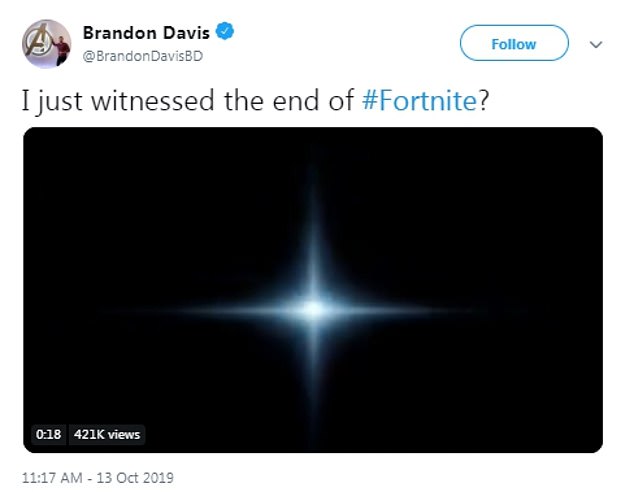 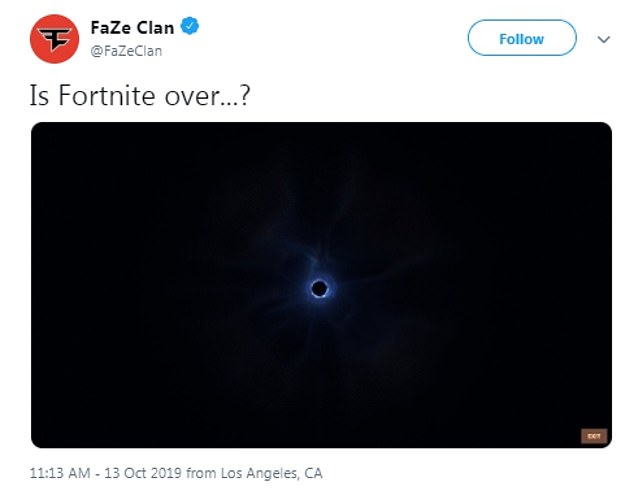 ‘Is Fortnite over?’ wondered one Twitter user on Sunday

Online gaming experts say the end wasn’t a total shock, as there have been hints throughout the entire season that the map would be replaced.

Adding to the confusion on Sunday was the fact that the official Twitter account of Fortnite deleted all of its tweets.

The shock ending prompted gaming enthusiasts to wonder if Elon Musk had bought Fortnite only to delete it – as the Tesla chairman joked in a tweet from last year. 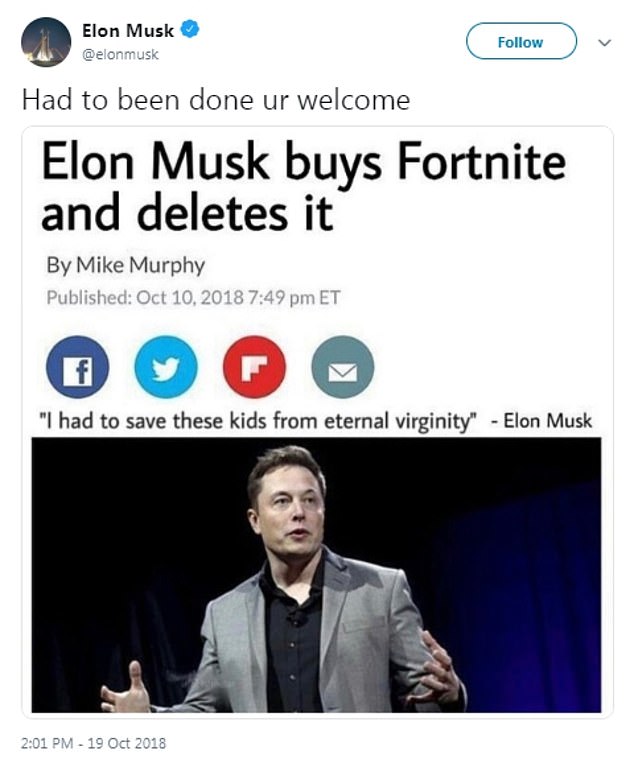 Last year, Elon Musk tweeted a fake news item which claimed that he bought Fortnite just to delete it because he wanted to ‘save these kids from eternal virginity’ 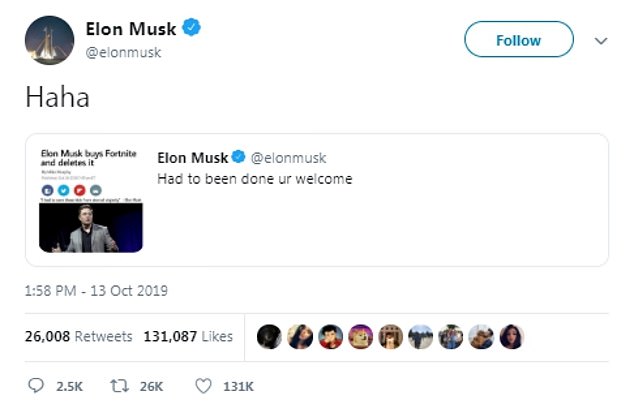 Musk then teased online gamers by retweeting the link, writing: ‘Had to be done ur welcome.’

But gaming experts assure fans that Musk did not have anything to do with Sunday’s event.

Fortnite is a game that originally launched as a disk back in July 2017 and was then turned into a free-to-download game by its developer, Epic Games, in September.

There are three forms of the game: ‘Battle Royale’, ‘Save The World’ and ‘Playground’.

Save the world is the original form of the game and is currently not available to play as part of the free-to-download game, instead it comes as part of a £30 ($40) extra.

It is a co-op mode with a story that’s playable solo or online with friends.

Users compete in teams of up to three to complete a variety of missions.

It is rumoured that the game will be added to the free-to-play version of the game in the future.

Whilst Save The World may be the original version of the game, its sister mode is by far the most popular.

Battle Royale is a game of survival where players create a superhero avatar and compete against each other on a dystopian island.

Each game, or ‘match’ as each competition is known, starts with 100 players.

The aim of the game is to be the last one standing. Users can form allegiances and play in small groups.

To enable this and the interactive experience, the game allows completely open communication between players.

Inspired by the Hunger Games novels and films, gamers search for weapons to help them survive.

Armed with quirky weapons and amusing dances, the game has swept across the gaming world, with children flocking to it.

While there is no exact figure on how many children play Fortnite, the game has so far pulled in an audience of over 125 million players.

Playground is the latest addition to the game and is a consequence free mode with more loot and unlimited respawning to allow players to get creative.

It involved groups of up to four people working as a team and the players can hone their skills as the practise in advance of entering Battle Royale where they will face better players.

The Decades 10 Most Influential…

Ripper—the Inside Story of the…

The Goose Game Is on…

Woman who tripped on collapsed…

Your brain on gambling: Why…

The highly-anticipated remake of PlayStation…

Hows this for good fortune?…